Explained: Saudi Arabia’s ban on the Tablighi and Da’wah group

by Muslim News Nigeria
in World
2

Saudi Arabia has banned the Tablighi and Da’wah group, also known as Al Ahbab, calling it a ‘danger to society’. A look at the roots of this group, which is active in more than 150 countries and is the largest Islamic missionary movement.

Saudi Arabia has banned the Tablighi and Da’wah group, also known as Al Ahbab, calling it ‘danger to society and one of the gates of terrorism’.

In a tweet on December 6, the country’s Ministry of Islamic Affairs said, “His Excellency the Minister of Islamic Affairs, Dr.#Abdullatif Al_Alsheikh directed the mosques’ preachers and the mosques that held Friday prayer temporary to allocate the next Friday sermon 5/6/1443 H to warn against (the Tablighi and Da’wah group) which is called (Al Ahbab)”. 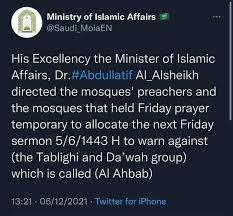 The tweet mentioned that the minister has directed that the sermon cover topics including declaration of “the misguidance, deviation and danger of this group, and that it is one of the gates of terrorism, even if they claim otherwise”, to mention their prominent mistakes, to mention their “danger to society” and a statement that affiliation with partisan groups “including (the Tablighi and Da’wah Group) is prohibited in the Kingdom of Saudi Arabia.”

However, it is unclear if the government’s tweets were directed at the Tablighi Jamaat, the Sunni Islamic missionary movement that was launched in Mewat in 1927 by the Islamic scholar and teacher Maulana Muhammad Ilyas, who coined the slogan “Oh Muslims! Become Muslims”.

It is also unclear why the Saudi Arabian government has banned the group and if the ban has been initiated because of certain ideas and interpretations of the Tablighi Jamaat.

In 2013, Kazakhstan banned the Tablighi Jamaat and designated it as extremist. Radio Free Europe reported at the time that the court cited the ideas that were propagated by the group but did not make clear which specific ideas were found to be extremist. The movement is also prohibited in countries including Iran, Russia, Tajikistan, Turkmenistan and Uzbekistan.

The Islamic Seminary Darul Uloom Deoband criticised the Saudi Arabian government’s move in a statement on December 12. It said the allegations of terrorism are baseless.

The allegations of shirk (polytheism), bid’ah (religious innovations/inventions) and terrorism are meaningless and unfounded, it said, and has requested the Saudi Arabian government to review its decision on this matter and refrain from taking such an action against the Tablighi Jamaat.

The roots of this movement — which is active in more than 150 countries and is the largest Islamic missionary movement today — can be traced back to the Deobandi tradition, which originated from the Darul Uloom madrasa in Deoband, the book “Islam on the Move: Tablighi Jama’at in Southeast Asia” by Farish A Noor notes.

The book also says that the Tablighis were mainly lay missionaries who sought to transform Muslim society and bring Muslims back to the path of truth. The movement mainly functions with the aim of reaching out to ordinary Muslims to revive their faith in the religion and guide them on matters of ritual, dress and personal behaviour. “Without over-particularising the Tablighi Jama’at, it can be said that the movement is somewhat special in the sense that unlike many other missionary movements the world over, it seeks to convert not those outside the faith community but rather those within,” the book says. 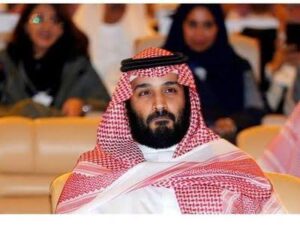 According to the Pew Research Center, while most followers of the Tablighi Jamaat are primarily interested in matters of personal piety and spiritual self-renewal, some of them have been accused of having ties to radical networks. For instance, the “Shoe bomber” Richard Reid, who in 2001 tried to set off a bomb on a commercial aircraft, and John Walker Lindh, the American citizen captured by US forces with Taliban soldiers in Afghanistan in 2001, spent time in Tablighi circles as per Pew.

An 2013 article published by the Jamestown Foundation says that the Tablighi Jamaat has “traditionally eschewed politics and concentrated its efforts on reinforcing the faith of Muslims”. It goes on to say that while many followers of terrorist and extremist groups have reportedly attended meetings run by the group, widespread jihadist preaching and ties to terrorist activities have not been identified yet.

Further, while the movement is connected to the Deobandi movement of Sunni Islam, “it has much in common with the Wahhabi style of Islam that is associated with Saudi Arabia’s religious establishment. However, Deobandi doctrine tends to be more flexible than Wahhabism and is more accepting of other Islamic approaches, such as Sufism,” Pew notes. Because of its identity, some Muslim schools of thought may view the Tablighi Jamaat as having a worldview different from them and therefore have developed apprehensions and certain notions about the Tablighis.

“In those cases where the Tablighi has come under the microscope of other Muslims who may harbour misgivings about them, there is likewise the assumption that there is such a thing as the Tablighi Jama’at, and that it has an identity that sets it apart from other Muslim groups,” Noor writes in his book.