YOU’RE ON YOUR OWN: Muslims frown at hijab-wearing ‘2021 Miss Nigeria’ winner

A cross-section of Muslim netizens on Saturday, December 18 frowned at Ms. Shatu Garko for wearing the hijab to participate at the just concluded Miss Nigeria, where she was crowned the winner of the annual beauty pageant.

Garko, an 18-year old hijabi model, who hails from Kano was announced the winner of competition after defeating 18 other contestants

Muslim News gathered that Ms Garko is the first-ever hijab-wearing Muslimah to win the annual pageant which started in 1957.

Since her announcement as the 44th Miss Nigeria on Friday night in Lagos, Southwest, Nigeria, some Muslims on social media have expressed their disappointment, saying she acted contrary to what the hijab symbolises.

A netizen, Hajee Ajiboye said, “No properly oriented Hijab-wearing (Muslim girl) will partake in an act that makes you expose many parts of your body to the whole world. Where is the dignity and morality of such young lady?” 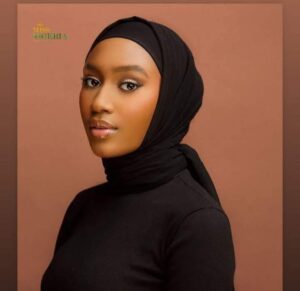 Another person, Iyke Joash had this to say, “I don’t think this woman is a real hijab Muslim…because a real Muslim woman cannot be on this exterior contest.”

To some, what the winner, who represented the North-west zone at the competition wore cannot be categorised as Hijab.

Abdullahi Ahmad Ola said, “Where’s hijab in her dressing? Stop calling her Hijab-wearing girl. No Hijabite will contest for this, let alone win it.

In Muhyid-din Ibn Rosheed Olánrewájú’s words, “Stop tagging her hijab-wearing model pls, she put on a headscarf, not a hijab.”

“As far as am (sic) concerned, she is on her own, whatever she does shouldn’t be linked to Islam because Islam has rules and regulations, which obviously doesn’t reflect in her,” Salami Idiat said, while reacting to the news on social media.

One netizen, Omigala Naija Isaac Onuche noted, “the organisers just wanted to buy the heart of northerners, because they know most northern Muslims forbid pageantry. I know it is not just the dressing that made her win. It is a strategy.”

Another person, Makanjuola Adekunle Wasiu stressed that “it shows you don’t need to display nudity before you emerge as the winner. That is the lesson.” 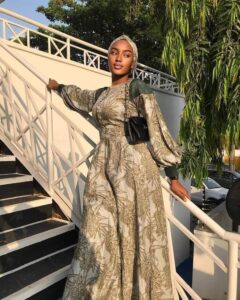 According to a netizen, who goes by the name, Kola Kool, “Natural beauty and decent dress are the key to original beauty, Congratulations to this Hajia, I’m proud of you.”

Religion and culture not barriers to achieving one’s dreams – winner

During her speech, the new queen said she is passionate about proving that religion and culture are not barriers to following one’s dreams and achieving whatever a person sets out to achieve.

The new Miss Nigeria won N10m, a 1-year residency at a luxury apartment, a brand new car and other mouth-watering brand ambassadorship opportunities.

She promised to uphold the ideals of the Miss Nigeria pageant.

This is not the first time a Muslim hijabi would be participating in a beauty pageant. Muslim News findings revealed that in 2013, a Nigerian, Obabiyi Aisha Ajibola, was declared the winner of Miss Muslim World in faraway Jakarta, Indonesia’s capital, which has the largest Muslim population in the world.

Her emergence was also greeted with controversies as many Muslim women on social media registered their dissatisfaction over what they termed, “madness, foolishness, craziness, and Islamization of madness in the name of World Muslimah Beauty Pageant.”