– How Idayat Arowogbola attended citizen interview with niqab without discrimination

It’s heartwarming to see US, unlike Nigeria, have regards for Niqab, Hijab – HRAI

A Nigerian-American, Mr. Abdullateef Okuribido has advised Muslims not to fall into mistakes of comprising their faith due to ephemeral of the world.

He made the call in a video made available to Muslim News, on Friday, January 7 as his wife Hajiah Idayat Arowogbola was granted American citizenship despite appearing on niqab (veil) to the US citizenship interview.

Back in Nigeria, the niqab and hijab have been a major source of back and forth controversy with both young and elderly Muslim ladies facing discrimination and violation over the Islamic apparel.

Arowogbola, however uses the niqab freely in the US without intimidation or harassment, even to the point of getting the coveted US citizenship.

Why I released the video – Mr. Okuribido

Okuribido explained in the video that, “Though the United States certificate of naturalization is not the certificate of Al-Jannah (paradise), I want this video to serve as a message to Muslims and non-Muslims. We are here at the US Customs and Immigration Service (CIS) office in Dallas, Texas. My wife came for the oath ceremony as a new US citizen.

He continued: “The main reason for this video is the Islamic dress (niqab). My wife did her US citizenship interview with the same niqab. On her interview day, she wanted to wear a mask, a regular mask to replace the niqab. But I told her not to remove it because this is the United States. In the US Constitution, there is freedom of religion. You can practise any religion — Islam, Christianity, Hinduism, Buddhism, etc. You can also decide not to practise any religion. 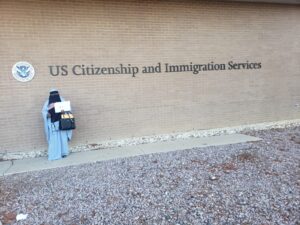 The Nigerian-American Muslim therefore called on Muslims not to comprise their faith over this ephemeral world. He said, Stop compromising your Islam for dunya (worldly affairs). If the US allows freedom of religion, what’s wrong with your country of origin? For instance, in Nigeria, few Muslim ladies that wear the niqab always face mockery by ignoramus Muslims and non-Muslims,” he admonished.

I did my interview, attended my oath ceremony in Niqab – Muslimah, Idayat

For her part, the niqabi Idayat narrated that she had been a resident of the US since 2015 following her marriage to Okuribido, a Nigerian-American.

According to her, “I married a Nigerian-American, Abdullateef Okuribido in 2014. I qualified to apply for the US citizenship after 3 years because I am married to a citizen. So I applied for the citizenship around June 2021 and after completing my biometrics, I was called for the interview on December 11, 2021.

“On my interview day, I wanted to remove my niqab and wear the ordinary mask. However, my husband said, “no” that the United States has freedom of religion in its constitution. You can either practice your religion or no religion. I only lifted my niqab in front of the photo machine and one of the immigration staff quickly told me to cover it up. In a nutshell, I did my interview in niqab and also my oath ceremony. Alhamdulillah!.”

She further told Muslim News that she started using the niqab in 2020 though she had the intention long before marriage.

“I saw some Muslim women wearing niqab on and off like a part time thing. Then I decided to carry out my intention and be a role model as a permanent niqabite not on and off like those I have seen here,” she noted.

The Muslimah, who was formerly a member of MSSN, Itire-Ikate Central Branch, Surulere, Lagos, advised fellow Muslims to always stand firm on their Islamic faith. 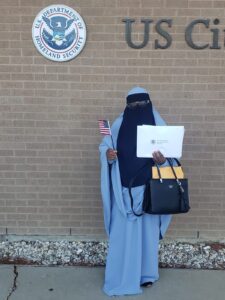 She said, “You won’t believe that Nigerian Muslims by names, especially women and non-Muslims are the most irritated about my dressing in the US. I have two instances. One elderly alasalatu (Muslim lady) refused to transact business with me as soon as she saw how I dressed. The second instance were the members of a Redeemed Church in a city called Arlington in Texas. I used to trade after church service because one of its members asked me to be selling to them after church service. Unfortunately, some of the members were irritated and the pastor had to tell me not to come back. No matter the adversity, Muslims should never compromise Islam because it’s part of Allah’s test.”

The Hijab Rights Advocacy Initiatives (HRAI), a body advocating for the rights of Muslim women in Nigeria has reacted to the news, calling it heartwarming, while urging Nigeria to take a cue from it.

Hajiah Mutiat Orolu-Balogun, convener of the group said despite the fact that the Nigerian constitution is clear on freedom of religion, some persons find it difficult to accommodate others.

“I am sure in the world, we are one of the countries that have the largest number of mosques and churches, and our sense of having a religious identity is very strong. It’s not that this is actually wrong in itself. However, what those two religions teach us — kindness, fairness, justice, love and all that — is very scarce in our society. We don’t practise it.

“And our constitution is even clear on the issue of freedom of religion. However, we find out that the general citizenry are not so tolerant of each other. And then, the one that doesn’t make so much sense or that makes one a bit uncomfortable for the want of a better word, is when institutions are also used to perpetrate such discriminations. 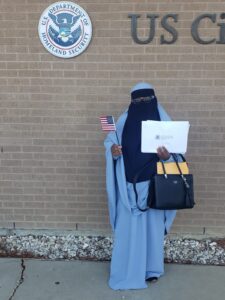 “Our sister has now become an American citizen. But probably when she wanted to do her initial visa into the United States, the Nigerians at the American embassy might have told her she would not get the visa if she’s wearing the Hijab. I’ve seen and heard it from people it happened to firsthand, that you need to remove this (Hijab or Niqab) and snap with your cap or nothing at all if you want to be successful in your visa interview. And even when the person insists, she still finds out that a lot of staff will say you have to bring out your ears to do biometrics.

“In most of these places, it’s usually pasted on the wall that a person with hijab or niqab is accepted after the confirmation of their identities. Even in the immigration office issuing Nigerians international passport, you find out that we still have these issues. In a place like the Immigration office in Ibadan, I know of three or four cases that have been reported to us at Hijab Rights Advocacy. Only one was resolved, they still do not allow Muslim sisters to use their hijab to capture for their international passport.

“The least they would permit, if they are going to wear the hijab is for them to bring out their ears. And yet, they have a poster saying you can wear your hijab, but they are claiming that’s only for foreigners. So, it’s very heartwarming to see that the world standard they are using is permitting the use of not only Hijab, but Niqab. Similarly, it’s also sad that we that are claiming to be religious are not as accommodating as other countries.”

Orolu-Balogun lamented the slow pace of the judicial system in Nigeria, which according to her has made people complicit of discrimination and violation of Muslim women in hijab go scot-free.

“Our constitution guarantees the freedom of thought, conscience and religion. Same as the constitution of the United States of America. However, the difference is that in Nigeria, we don’t have strong institutions and we don’t have accountability and consequences. I am sure that if a person discriminates against another person in a developed country, it wouldn’t take long for you to file your matter in court and for you to be heard and the matter to be dealt with. And there are consequences for such actions.

“But in Nigeria, the judicial system is slow. Even though you can do the same thing, you might not get the same result in the same time. Over there, there are consequences. A person will not do that and go scot-free. In Nigeria, a lot of people have been able to do it and they have gotten away with it. The highest they will do is to give you an apology and then do it to the next person that is coming the following week and then nothing happens.

“There are no consequences. No query will be issued. No disciplinary action will be taken because we don’t have strong institutions and the judicial system is not as fast as we’ll like it to be. That’s why people get away with things like this easily despite the fact that rights are the same as in the United States. But we are working on this. We’ll keep striking to change this narrative. We pray Allah helps us.”

She also urged Muslim women to always be patient and firm in dealing with discrimination issues, and not to resort to compromise quickly.

“I think the best lesson we can learn from this, like the husband said in the video that we should not trade our aakhira (hereafter) for dunya (worldly affairs). It might sound cliche, but there is a whole lot of truth to that. Again, for some people, it might be easier than others. Some people might find themselves in a situation where they might have to compromise, and I wouldn’t take away from any individual’s struggle.

“However, I know that it’s always good to be firm and to be at least a little bit patient because sometimes when you are in a hurry, and want to do biometrics, in the cause that you don’t want to be delayed, you might just need to compromise. A lot of these happen. It’s for us to be prepared before we go, for us to have a good mindset, do our du’a and then be firm and patient. In the end Allah knows all our situations and is the only one that can judge you,” she added.