Vice-President Yemi Osinbajo has charged religious leaders to use faith to promote peace, ensure prosperity for the people as well as the development of societies.

We must use our faiths to promote peace and prosperity for our people; we need to work together to ensure that our people benefit from religion.

“We tend to underestimate the importance of religion in spite of the fact that it plays important role in the development of societies in the spiritual and physical realms.

“There are many nations of the world that have benefitted from the impact of religion both spiritually and physically.

“We must, therefore, use religion in our countries and in Africa to help our people to live better lives.

“In other parts of the world, leaders of faith have used religion to better the lives of the people,’’ Osinbajo was quoted as saying.

He stressed that in spite of differences, Africans must be able to sit together and dialogue and avoid situations that create disunity. 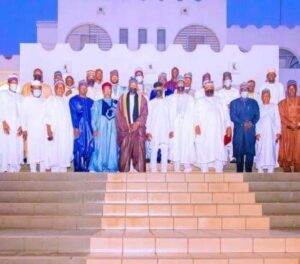 “With what is going on across the world, people of faith must continue to emphasise that both major religions (Islam and Christianity) promote peace.

`We must allow our people to practice whatever religion they want to practice,’’ the vice-president charged.

Osinbajo praised the leader of the group while commending the Tijjaniya Movement for its progressive ideals and compassion for the needs of the people.

The vice-president described President Muhammadu Buhari as a model of leadership that accommodated people of different religious backgrounds, citing his relationship with the president spanning more than seven years as a perfect example.

“President Buhari is a devout Muslim and I am a pastor; both of us have worked together for about seven years; we have not had issues.

“The president has shown great leadership; he has shown that he wants a country where people of different faiths live in harmony and with love for one another,’’ Osinbajo stressed.

Earlier, Niass who spoke in French interpreted by a spokesman thanked the vice-president for the opportunity to meet with him and his delegation.

He described Osinbajo as a great personality, the type needed both in Nigeria and in Africa.

“The vice-president is a great personality with an exceptional character, standing on two feet — one as a political leader concerned about the progress of his people and the second, as a man of God.

“Africa needs a person of your nature with very strong background in religion and politics.

“I pray that Almighty God will upgrade you and enable you to achieve your desires and aspirations because, as I said, not only Nigeria, but Africa will benefit from your leadership qualities,’’ he said.

According to Niass, Nigeria is the heart of Africa and whatever Nigeria becomes, Africa becomes.

Niass also expressed the group’s gratitude to President Buhari for his support, while praying for his safety and for Nigeria to overcome all its challenges.

The vice-president later promised to convey the Sheik’s warm greetings and appreciation to President Buhari.

Niass and other members of the Tijjaniya Movement across Africa and the worldwide converged on Gusau to celebrate the 36th international Maulud anniversary in honour of the movement’s departed leader Sheikh Ibrahim Niass.