Abdulazeez Abdulrahmon of Oriwu Model College, Ikorodu has emerged as the winner of the 20th edition of the Lagos State Spelling Bee competition at the grand finale held on Thursday at Adeyemi-Bero Auditorium, Alausa, Ikeja, after a tense final competition.

The Lagos State Head of Service, Mr. Hakeem Muri-Okunola in his goodwill address expressed satisfaction with the level of competition noting that the competition is a confidence booster which has helped the youth to showcase their potential.

The Head of Service who was represented by the Permanent Secretary, Public Service Office, Mr. Samson Ajibade lauded the success of the competition as past winners are now leaders in their chosen careers.

While extolling the efforts of the winners, as well as all participants in the annual competition, the Lagos State Head of Service encouraged the students not to rest on their oars but strive to achieve greater heights.

He however reiterated the continuous support of the State Government through the Office of the Education Quality Assurance towards the success of future competition. 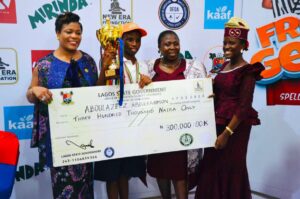 The Commissioner for Education, Mrs. Folasade Adefisayo, who was elated with the level of competition among the participants and winners, commended the brilliant performance of all participating students and schools.

She added that the spelling bee competition has been a great motivator amongst learners in the State noting that the high level of performance from the students underscores the fact that the State Government is committed to the delivery of quality education geared towards improving teaching and learning in Lagos public schools.

Earlier, the Director-General, Office of Education Quality Assurance, Mrs Abiola Seriki-Ayeni, expressed appreciation to Governor Babajide Sanwo-Olu, for keeping faith with the competition. She opined that this year’s competition was aimed at bringing out the best in participants and also to justify the State Government’s efforts in ensuring that students achieve nurtured dreams while promoting excellence in the educational sector.

The Director-General noted that the two-day competition witnessed students from 57 primary and secondary schools contending for cash prizes and scholarship awards.

She stated further that the Office of Education Quality Assurance will continue to drive measures to improve the standards and academic excellence in both private and public schools in line with global best practices. 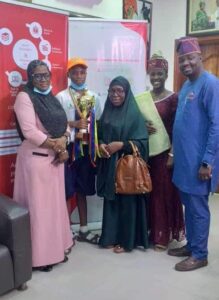 Mrs. Seriki-Ayeni acknowledged the partnership of the various private sectors towards the successful hosting of the competition while imploring participants to see the competition as a value adding contest, work hard and make the best of the opportunity that will make their academic life more meaningful.

“We acknowledge the partnership of the private sector towards the successful hosting of Spelling Bee competitions, which includes, Seven-Up Bottling Company, United Bank for Africa (UBA) and Kessington Adebukunola Adebutu Foundation (KAAF) for partnering with the Lagos State Government to host the 20th edition of the event”.

Apart from having the opportunity of being the Lagos One Day Governor, Master Abdulazeez was presented with a cash gift of N300, 000, a trip to Finland and scholarship to any public university in the State while the first runner up, Master Oki Coordinator of Sito-Gbethrome Senior Secondary School, Badagry, got the sum of N200, 000 and the second runner up, Miss Alimot Saheed from Jubilee Model Senior Secondary School, Coker Aguda received a cash gift of N150,000.

In the Primary School category, Sofia Muhammed, of Agbowa Baptist Primary School, emerged as the overall winner while Khalid Olayide of Ikosi Primary school and Daniel Olanrewaju of Keke Primary School emerged as 1st and 2nd runner-up respectively. They were presented with cash gifts to celebrate their academic excellence.

The Spelling Bee project was initiated in 2001 by the former First Lady of Lagos State, Senator Oluremi Tinubu, through the New Era Foundation, with the aim of promoting academic excellence, good reading habits, healthy academic rivalry, and public speaking proficiency amongst public schools students in the state.

He deserves to win – Hajia Shogbuyi

One of the teachers who groomed the overall winner, Hajia Adebola Karamah Shogbuyi, in a Facebook post, thanked Allah for the outcome of the competition.

“Which of the favours of my Lord can I deny? We worked hard, prayed hard and emerged successful. Alhamdulillah!

“I present to you, His Excellency, Abdurrahman Abdulazeez, winner of the Lagos State Spelling Bee Competition and Governor for one day, 2022.

“The competition was a keen one. He spelt words many Professors may not be able to spell and I am glad you have made us (your teachers) parents, school and associates proud. Congratulations dear! Barakahllahu fihi!,” She wrote.

According to her, my first experience with the Spelling Bee was in 2016, when a student from my school, Kehinde Komolafe came second, becoming a Deputy Governor for one Day. That was when the interest started, alhamdulillah.

“The other two winning experiences were last year and this year when students from my district emerged winners. Although they aren’t students form my school, I played significant roles in drilling them for the competition.”

Speaking further, the hijab-wearing Muslim teacher said, “When it’s time for the competition in my district, I have been identified as one the teachers that will mentor the students participating in Spelling Bee and other competitions.

“We groomed the students for the competitions and followed it up till the D-Day. I have been part of this in the last five years and alhamdulillah, we have been winning.”

Shedding light on the grooming process, she said, “Basically, the Spelling Bee is a Lagos State event and we have 6 districts. Some do the grooming together while others do it separately in their own districts. But in our district, we try to gather the students together, that is why we have 11 of them that represented from our district. They go through series of trainings, including rules guiding the competition.

“Among the 11, only 3 are Muslims, and one of them is Abdul Rahman, who emerged overall winner to become a-day governor. The student that came third, though not from my district, is also a Muslim. She uses the hijab.

“The competition isn’t about religion. You will not even know if the participants are Muslims or not, it’s about hardwork and determination. At the end, only the one favoured by Allah emerges winner. I am so happy a Muslim won it. Abdul Rahman deserves to win.

“Lastly, my biggest dream is to see my student emerge the next One-Day Governor in shaa Allah,” she added.