A group of Nigerian Muslim women have thrown their weight behind the presidential aspiration of former Governor of Lagos State, Asiwaju Bola Ahmed Tinubu, describing him as a unifier and bridge-builder who understands the politics and economics of Nigeria.

The women who were drawn from various Islamic organisations spoke under the banner of Coalition of Muslim Women for Asiwaju (COMWA) on Tuesday at the Lagos State Secretariat Mosque Hall, Alausa, Ikeja, Lagos, Southwest, Nigeria.

Asiwaju Tinubu is one of the leading presidential aspirants on the platform of the ruling All Progressives Congress (APC). A former Senator and two-term Governor of Lagos State, he is the National Leader of the APC.

Asiwaju will be slugging it out in the primaries with other bigwigs of the party who have also declared their interest such as Vice President Prof. Yemi Osinbajo; Minister of Transportation, Mr. Rotimi Amaechi; Kogi State Governor, Alhaji Yahaya Bello; former Imo State Governor, Senator Rochas Okorocha, amongst others.

Ahead of the party primaries, however, the Muslim women have in their numbers converged to pray and endorse the candidacy of Asiwaju Tinubu, noting they also form an important voting bloc in Nigeria’s political space.

• We’ll mobilise massive support for him across Nigeria – Convener

Welcoming participants who came from different parts of the State, the Convener of COMWA, Hajia Rasheedah Adebari-Aderemi said, “Today’s event is organised for Asiwaju Bola Ahmed Tinubu. It’s high time the Muslim women have a stand. We have decided to drum support for him. That’s why we gathered here to pray for him. If Allah says he will emerge President, no one can stop him.

Adebari-Aderemi, who later spoke to the media, said the group (COMWA) has branches in all parts of the country where massive support would be mobilized for Asiwaju Tinubu.

“It is not only in Lagos we have COMWA. We have COMWA in every part of the nation. We started this one as the first phase. In Lagos, we are the ones that own Tinubu. So, if we don’t start from Lagos, and we allow any other state to start it, it’s a big slap on our face. That’s why we started the movement from Lagos.

“We have started sensitising people on PVC. That’s our power. If you don’t have PVC, it means you don’t have a vote. We should all go back to the grassroots to register our PVC. It is compulsory for all of us,” she said.

“Women have a larger population. When a place is in progress, it means women are playing some important roles. For every successful man today, there is a woman behind him. So, there is no how we are looking for peace and progress that we won’t involve women. Even in the field of politics, women have a larger population. As professionals and business persons, we participate more in politics and sacrifice a lot because we consider ourselves as the mothers of men. We make generations continue.

“For COMWA, we Muslims simply want to let Asiwaju Tinubu know that we are behind him. This is our aspirant. We have a lot of groups around Asiwaju already, but this one is unique. It is for the Muslim women. We vote and we have rights to everything other people have rights to.”

A major highlight of the event tagged Prayer for Tinubu 2023 (Nigeria Project) was a prayer session for the presidential aspiration of Asiwaju Tinubu. The women led by Hajiya Jelilat AbdulWasi Bamiro and Alhaja Balqees Adekoya recited some selected verses from the Qur’an and duas (invocations) for the protection and success of Bola Tinubu during the forthcoming elections.

Why we endorse, organise prayer session for him – Alhaja Yusuf-Ajibade

According to the group’s Vice President 1, Alhaja Sherifat Yusuf-Ajibade, “We are out to support Asiwaju Bola Ahmed Tinubu in prayers because we believe it is only Allah (SWT) that appoints; He is the one that gives sovereignty.”

She added that Muslim women have been victims of bad governance and cannot afford to be laid back in the electoral process, whilst describing Tinubu as a nationalist whose antecedents show that he has the ability to rule the country.

“We believe that as Muslim women, you look at insurgency, we suffer the most. When they show us on TV, you see women in hijab, children in hijab, telling us that we take the brunt of the insurgency, banditry and all of those. We are great voters, but before voting we want to stand with that man who has demonstrated the ability of a bridge-builder and unifier; somebody who has jettisoned nepotism; somebody who has shown that he is a leader to all, not just a segment of the country. Asiwaju is a nationalist and the Nigerian project is very dear to him. We feel that coming out as Muslim women, identifying with him shows that we are tired of just suffering in silence.

“We want to give him the support from the home because we are the home-makers. We believe that his ability has been demonstrated in Lagos State. His antecedent has shown that he has the ability to work with Nigerians of all shades. As such, we see him as that unifying factor. We are not just identifying with him because he is a Muslim. He is not a religious bigot. He is very accommodating and that’s what Islam preaches.

“We are taking our lessons from the life of the Prophet (SAW) in Madinah where he lived with the Muslims and non-Muslims in Madinah. The Muslims were even protecting non-Muslims because Madinah belonged to all of them. We see Asiwaju as that person who can do it because he has led Lagos. In his cabinet, we had all shades of people. We believe that’s the kind of person who will not marginalise anybody, either on tribe, ethnic or religious basis. We see him as somebody who will unite us, who will bring us together. 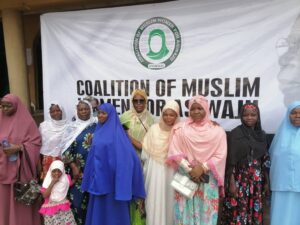 “We admit that he may not be a saint, but we’ve seen so much good in him. As such, we are praying for him to emerge as the candidate for APC come the 2023 election. We know that by the end of this month, everything would be done. We are sure that he has the clout, charisma and wherewithal to lead Nigeria out of the doldrums. He is a financial expert, a community man, a leader.

“We are here to support him and pray for him. We will not stop the prayer here. The Coalition of Muslim Women for Asiwaju will continue as this is just the groundbreaking event for the project. We are moving forward in our homes, mosques and various organisations to continue praying for him. And come 2023, we are going to cast our votes for him.”

Tinubu is the right man to lead this country – National Mobiliser

For her part, Hajiah Mutiat Orolu-Balogun, National Mobiliser, COMWA said Muslim women will mobilize and put Asiwaju Tinubu in Aso Rock come 2023 because he is the right man to lead the country at this time.

“Muslim women in this country have been the endangered species. We have been at the bottom of the food chain. Our rights are being infringed upon and what we contribute to society has not been brought to the fore. So, right now, as Muslim women, we want to come to the fore to also take a vital role in deciding who leads us in Nigeria, on who becomes the next President in Nigeria.

“Nigeria is such a great nation, the largest black nation in the world. For every ten persons you see, there are two Nigerians. It is therefore very important that we take a decisive role in determining whosoever becomes the next President of this great country of ours.

“The person of Senator Bola Ahmed Tinubu who we all know as Asiwaju, the Jagaban of Borgu is whom we think is the right person to lead our dear country at this particular time. He is somebody that understands Nigeria and what it means to be a Nigerian. He is a bridge-builder. He is someone that listens to the people and he knows how to put things in place to get things done. We all know what Lagos is. Lagos is the most populous city in Nigeria. We know what Lagos was before Asiwaju Bola Ahmed Tinubu took the reins of power. And let us look at what Lagos is today. When Lagos sneezes, the whole of Africa will catch a cold.

In her goodwill message, former chairperson of the Lagos chapter of the National Association of Women Journalists (NAWOJ), Alhaja Sekinah Lawal called on Muslim women to actively participate in politics.

According to her, For us to make that needed change, we have to be actively involved. If we are saying there is no time, those who have the time will be deciding for us and at the end of the day, we will be complaining that things aren’t working the way it should be. If those of us who believe we can make things work shun it, how do we expect the change to come about? I call on all Muslim women, let’s also be active in politics. It’s about our lives, it’s about our children. 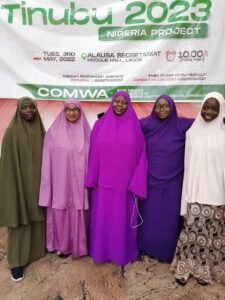 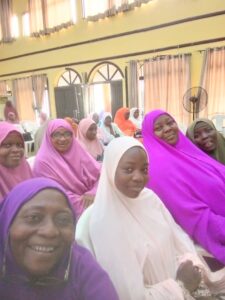 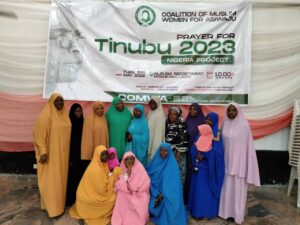