An Islamic scholar and supreme leader of the Tijjaniyya sect, Sheikh Dahiru Bauchi, has expressed optimism that Vice President Yemi Osinbajo will succeed President Muhammadu Buhari ahead of the 2023 presidential election.

The cleric made his opinion known when he received the vice president who paid him a courtesy call at his Bauchi residence on Tuesday.

The cleric said he would double his prayers for the success of the vice president’s aspiration.

The vice president was accompanied by Sen. Adamu Bulkachuwa, the former Governor of Bauchi State, Alhaji Mohammed Abubakar, and some members of the National Assembly.

“I will cherish this visit for a long time because I have finally met you after previous communication by phone.

“I have been praying for you before now and now that you are running I will double up my prayers for you. 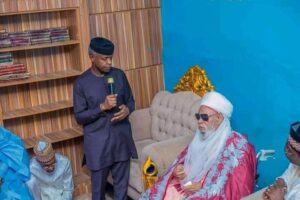 “All the things you have in mind God will grant you, we are going to support you so that when next you come here it would be as President of our country.”

Both the Islamic scholar and the vice president have always talked on the phone, exchanging pleasantries although they have not had the opportunity of a physical meeting until Tuesday.

In his response, the vice president thanked the revered cleric for the warm reception accorded him, commending his disposition to the unity of Nigeria.

“I am happy to see you; you are someone I hold in very high esteem. The reason is that you have always been one of the strongest advocates for the unity of this country and for tolerance amongst all our religious faiths.

You are somebody who has preached peace and you motivate us all the time.

“I have listened to you several times and I must commend your courage.

“We believe that the common man must be the center of everything that we do to afford them the opportunity to live their lives, and have jobs, which we must provide.”

Osinbajo told the cleric that he put himself forward to run as the presidential candidate of the All Progressives Congress (APC), having been the vice president for the past seven years.

He said that with the help of God, he would serve out the tenure in another one year.

The vice president said over the years, he had acquired the requisite experience to lead Nigeria as the president.

“During that period, I have had the privilege of serving under an open-hearted leader, President Muhammadu Buhari, who has made sure that I learn everything about governing a diverse country and a multi-ethnic and multi-religious country such as ours,’’ he said.

Osinbajo solicited the support and prayers of the cleric to enable him to continue with the task of transforming the Nigerian economy.

The courtesy visit to Sheik Bauchi is on the sideline of the vice president’s visit to Bauchi in continuation of consultation with stakeholders and delegates of the APC ahead of the party’s primaries scheduled for May ending.