No fewer than 430 intending pilgrims from Lagos State have landed safely in Madinah to perform the Year 2022 Hajj exercise in the Kingdom of Saudi Arabia.

The pilgrims left the shore of Nigeria through the Murtala Mohammed International Airport (MMIA) yesterday, at 11.45pm with Flynas Airline XY 5010, a Saudi Arabia based airline. The first batch comprised of 170 male and 260 females respectively.

Speaking with the press on his impression about the Inaugural flight being his first experience, the Hon. Commissioner for Home Affairs, Prince Anofiu Olanrewaju Elegushi expressed his gratitude to Allah that, after two consecutive years of break in Hajj operations due to COVID-19 pandemic, the international pilgrims are having the privilege of performing the spiritual exercise once again.

Elegushi urged them to be good ambassadors of Lagos State in particular and Nigeria in general and be law abiding in all their deeds and conducts in the Holy land, praying that Allah would see them through.

He emphasised that everything are in order and the pilgrims happy, adding that the second flight of another 430 intending pilgrims would depart Nigeria on Wednesday June 15, 2022 via the Murtala Mohammed International Airport, Ikeja, Lagos.

On his part, the Special Adviser to the Governor on Islamic matters, Hon. Ahmad Abdullahi Jebe, said as a proactive state, Lagos had equipped its pilgrims through the weekend lectures and other engagements in the area of spiritual practice and other activities.

He added that the State had put everything in place to ensure their comfort and welfare in the Holy land, saying the pilgrims would enjoy their stay.

The Board Chairman, Engr. Shakiru Ayinde Gafar, popularly known as Mofesaye, stressed that the intending pilgrims had been given adequate information on the dos and don’ts in respect of the journey.

No fewer than 430 intending pilgrims from Lagos State have landed safely in Madinah to perform the Year 2022 Hajj exercise in the Kingdom of Saudi Arabia.#Hajj #Hajj1443 #NAHCON #SaudiArabia #Saudi #Islam pic.twitter.com/Bnp9ezRKGy

He said that the State had fortified its pilgrims enough by inviting Federal Government agencies such as the National Drug Law Enforcement Agency (NDLEA), Nigeria Customs, Nigeria Immigration, etc. to enlighten them on what to be taken along and other prohibited items. He added that the most important item to be taken along should be the fear of Allah (Takwa).

The South West Commissioner of National Hajj Commission of Nigeria (NAHCON), Alhaja Basirat Akintunde expressed her joy in the airlifting exercise, saying everything was going on smoothly as planned.

She stressed that few challenges being faced in the course of the exercise, especially the ones they have no control over, such as PCR test and visas are being surmounted as the exercise progresses. She added that both Flynas and Asman airlines are scheduled to airlift intending pilgrims from the Murtala Mohammed International Airport (MMIA), Ikeja, Lagos.

The Commissioner assured that the airlifting exercise would be vigorously pursued as scheduled by the National Hajj Commission of Nigeria (NAHCON), stressing that the airline would be carrying out the exercise back to back to ensure its completion before the end of the week. 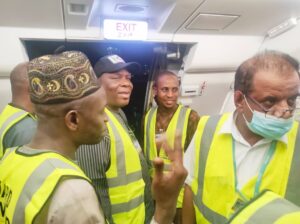 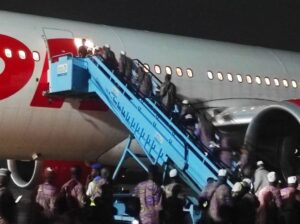 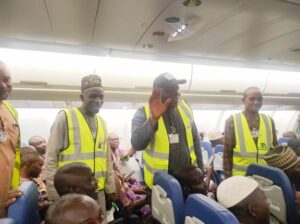