The Chairman/CEO of the National Hajj Commission of Nigeria, NAHCON, Alhaji Zikrullah Kunle Hassan has arrived in the Kingdom of Saudi Arabia for further engagement with the authorities in the interest of Nigerian pilgrims.

Zikrullah Hassan arrived in a flight along with top officials of the commission and other pilgrims at the King Abdul Aziz International Airport, Jeddah, on Wednesday, July 6, 2022, a day before the Kingdom is set to close its airspace for this year’s Hajj operations.

Muslim News reports that Saudi Arabia’s General Authority on Civil Aviation (GACA) had announced the extension of airspace closure till Thursday, July 7, to allow Nigeria and other countries worldwide to airlift all their intending pilgrims. 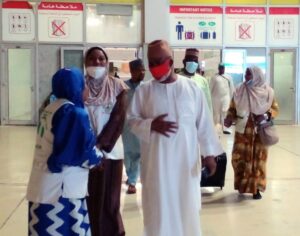 NAHCON, led by Zikrullah Hassan has succeeded in airlifting over 37,000 Nigerian pilgrims to Saudi Arabia for the 2022 Hajj rites which begin on Thursday, July 7.

“This is to bring to the notice of Nigerian intending pilgrims of the 2022 Hajj and other stakeholders in the Hajj and Umrah industry that the Chairman of the National Hajj Commission of Nigeria, Alhaji Zikrullah Kunle Hassan had to proceed to Saudi Arabia to enable him to make further arrangements in the interest of Nigerian pilgrims,” the Assistant Director, Public Affairs
NAHCON, Fatima Sanda Usara, said in a statement.

She added that the Chairman, while away in Saudi Arabia, has left the Commissioner of Operations, Alhaji Abdullahi Magaji Hardaway to coordinate arrangements at the home front and ensure the remaining 3000 Nigerian pilgrims meet up with the deadline.

“Deputy Director and Head of Aviation, Engr. Goni Sanda, Deputy Director Special Duties, Bashir Jazuli, and some staff are also with the Commissioner to support him,” she added.