National Hajj Commission of Nigeria (NAHCON) Media Team paid a working visit to the Ministry of Hajj Media office, the Kingdom of Saudi Arabia to explore collaboration on dissemination of information to pilgrims.

The head of National Media Team, Hajiya Fatima Muhammad Mustapha led a delegation of the NAHCON Media staff to meet with the Ministry of Hajj’s counterparts in the Awareness and Media department.

The meeting which was held in the ministry’s head office in Makkah saw the cementing of relationship between the two government agencies’ media teams. 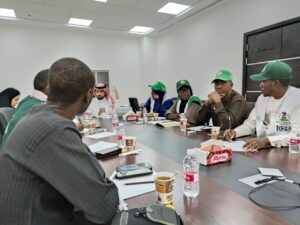 Matters of interest in relation to pilgrims information dissemination, enlightenment and awareness were discussed and a working relationship was established. This is the first time the two media teams would be meeting.

In her opening remarks, the head of media informed the host that the visit was a working visit to establish relationship and to share knowledge and foster future collaborations between the ministry’s media team and that of the Commission.

“We are here to learn from you and to also share with you knowledge and experience from our own end. We are colleagues working in the same path of informing the guests of Ar-Rahmayn. We have come here to establish a working relationship that will benefit the pilgrims and also help us in disseminating information to the target audience” she said.

In his response, Turki Alkhalaf, the General Manager of Awareness and Media welcomed the media team and assured them of his ever-readiness to collaborate with the NAHCON team in seeing that pilgrims are well informed.

Also, he appointed a desk officer, Mrs Rawan Assaf that will henceforth be handling correspondences from the NAHCON media team.

“Our doors are always open for you to come anytime. We will share with you information, materials and knowledge so as for you to deliver to the pilgrims. We will extend the relationship to cover both Hajj and Umrah seasons” he concluded.