Explosion in the heart of Turkiye’s Istanbul kills 6, wounds 81

by Muslim News Nigeria
in World
0

At least six people have been killed and 81 others wounded when an explosion rocked a busy pedestrian street in central Istanbul, in what President Recep Tayyip Erdogan called a bomb attack that “smells like terrorism”.

On Sunday, ambulances raced to the scene on the packed Istiklal avenue, which police had quickly cordoned off. The area, in the Beyoglu district of Turkey’s largest city, had been crowded as usual at the weekend with shoppers, tourists and families.

Speaking before his departure to the Group of 20 (G20) summit in Indonesia on Sunday, Erdogan said the explosion was a “treacherous attack” and pledged that its perpetrators would be punished.

“Our people can rest assured that the culprits behind the attack will be punished as they deserve,” he said at a press conference, adding that initial information suggested “a woman played a part” in it.

“It would be wrong to say this is undoubtedly a terrorist attack, but the initial developments and initial intelligence from my governor is that it smells like terrorism,” Erdogan said. 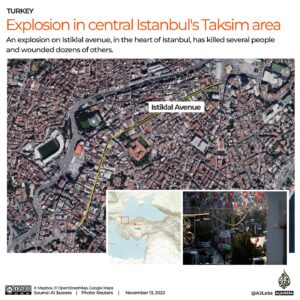 Four people died at the scene and two died in the hospital, Erdogan said.

The explosion occurred at about 4:20pm (13:20 GMT) on Sunday, according to officials.

A video posted online showed flames erupting and a loud bang, as pedestrians turned and ran away.

“My condolences to those who lost their lives in the explosion on Istiklal avenue,” Mayor Ekrem Imamoglu said on Twitter.

There was no immediate claim of responsibility. Turkey was hit by a string of deadly bombings between 2015 and 2017 by ISIL (ISIS) and by the outlawed Kurdistan Workers’ Party (PKK).

Al Jazeera has obtained pictures of the woman suspected to be behind the bombing, who officials believe was a member of the PKK.

Turkish Justice Minister Bekir Bozdag told A Haber television that the woman was observed sitting on one of the benches on the street for more than 40 minutes.

The explosion occurred just minutes after she got up, he said.

“There are two possibilities,” he said. “There’s either a mechanism placed in this bag and it explodes, or someone remotely explodes [it]”.

“I learned from my sources that the other two suspects are two very young men who were born after 2000,” she said.

Koseoglu added there was no information on the identities of the perpetrators yet.

Koseoglu said the explosion comes as a shock because there have not been any recent warnings over attacks in the city.

“But security measures have remained high in the area,” she said.

Footage from the aftermath of the attack showed people attending to victims. Later, investigators in white outfits were seen collecting material from the scene.

“When I heard the explosion, I was petrified, people froze, looking at each other. Then people started running away. What else can you do,” said Mehmet Akus, 45, a restaurant worker on Istiklal.

“My relatives called me, they know I work on Istiklal. I reassured them,” he told the Reuters news agency.

Condemnations of the attack and condolences for the victims rolled in from several countries including Greece, Egypt, Ukraine, Britain, Azerbaijan, Italy and Pakistan.