Foremost Nigerian broadcasters, journalists, leaders of different Islamic organisations and many great men and women from different walks of life on Thursday, January 19, 2023, turned out in their numbers in celebration of Hajia Aminah Muhammad’s fourth decade of practice in the field of broadcast journalism.

Muslim News gathered that the epoch-making event featured the launch of a new book, titled, “Whispering of a Broadcast Jewel” which chronicled her broadcast sojourn and presentation of awards to distinguished personalities and brands who have shown unflinching support for Aims Media, an all-round media company the celebrator founded in 2011.

Some Islamic organisations and professional bodies present to celebrate and support the good work she’s been doing with resilience, ardour and uprightness for over four decades, include: The Companion, The Criterion, Al-Barakah Foundation, MSSN Lagos, Muslim Media Practitioners of Nigeria, MMPN, among other brands/companies such as Vitafoam, Rite Foods, Lotus, NBC, NTA, UAC, Dangote.

The Founder, City of Knowledge Academy emphasized how humbled she feels for being chosen out of many contacts to chair the ceremony.

She urged young broadcasters and journalists to emulate Hajia Aminah.

“For the young broadcasters and journalists, I want them to borrow a leaf from Aminah. She does her homework very well, makes sure she puts her best forward, does her research very well and interview people making them feel very comfortable.

“She asks decisive questions and is very committed to her craft. Young broadcasters and journalists should hone their skills, carry out thorough research, be prompt, exude knowledge and confidence and lastly, always make people feel comfortable,” she said.

Her book; a must for young broadcast and journalists – Mr. Irabor

Irabor, who described Hajia Muhammad as unassuming, hardworking and humble, expressed his great pleasure and excitement for being honoured to review the book, adding that the book is a must for young broadcast professionals.

He said: “Every broadcaster, especially the young ones must read her book. They should learn resilience from her. She’s very resilient. She doesn’t run away from work and she always gives the best of herself to achieve the best.”

Aminah never takes a ‘no’ for an answer – Prof AbdulKareem

The Founder of FAJIM Medicare Foundation, Prof. Fatimah AbdulKareem, who has known the celebrant for about two decades told Muslim News that the veteran broadcaster never takes a ‘no’ for an answer.

She said: “Aminah is a woman of excellence. Whatever she does, she does it excellently. Aminah never takes a ‘no’ for an answer. She goes out of her way to succeed against all odds and she’s also been part of the FAJIM Medicare Foundation that we founded as a member of the executive committee. She gives her professional advice and uses her media to promote the foundation. We’re really very proud of her.”

She is instrumental to our course – Zakat Foundation

The Operating Manager of Zakat and Sadaqat Foundation, Alhaji Maruf Ahmad told Muslim News that Hajia Aminah and AIMS Media have been instrumental to the cause of their Foundation.

“One of the goals of the foundation is to support people’s growth, so, they can be more impactful in the society. AIMS Media is an organisation with which we have a very good relationship; they promote us and our programs/projects, as such, it is pertinent that we support her in our own little way in order to encourage her to make more impact. We also identify with what she’s doing like the child healthcare and will love to be identified with such,” he said.

Passion and interest brought me this far – Celebrant

The celebrant’s joy knew no bound as she was full of praise, thanking all the guests that honoured her day. She revealed that passion and interest in the profession has been a motivating factor from inception.

According to her, “First is interest, then passion. As media practitioners, you know there’s really no money therein, so, if you’re more concerned about the money, you’re on your own. Interest is paramount. When you do it well with passion, zeal and resilience, people will recognise you and money will come afterwards.

She laments on mediocrity which now plays in the media today saying: “Media generally has turned to all-comers, particularly with the advent of social media. Everyone is now a media practitioner. Back in the days, there was strict adherence to ethics, but today, we now have something called citizen journalism and people now do whatever they like.

“However, we the so-called old school still hold onto the ethics to be able to sieve the good from the bad and do the right thing. We have also imparted the little we have in others.”

Talking about challenges in the media today, she implored young journalists to believe in their products and brands.

“Challenges are only meant to reaffirm your commitment. There’s no two way about it. Believe in your product and brand, it might not be easy from the start. The major challenge in media is funding, but when you believe in what you do and people are convinced that you’re focused, they will be the ones to come to you.”

Speaking about the book, Hajiah Muhammad disclosed that it is her own way of telling her own story.

According to her, “Succinctly, the goal is to share experiences and tell a story, because everyone has a story to tell. It is simply my own way of telling my own story and sharing some tips on broadcasting and television production, so that those coming in can have something to leverage. They need to know that although the field is very lucrative and prosperous, it is not a bed of roses, it is laced with thorns and challenge. These challenges, however, are not insurmountable.”

She urged female Muslim professionals to always strive to beat expectations set for them by their colleagues and people in the work environment.

Trained at University of Ibadan with postgraduate studies in Mass Communication from Leicester University United Kingdom, Hajia Aminah Muhammad is the founder of Aims Media company limited and anchor of many educational TV programmes, including Pathway to Jannah; a spiritual journey to attaining eternal bliss.

She is a total and quintessential broadcaster with 40 years’ experience who worked with the largest television network in Africa, NTA until her retirement in 2015. She rose through the ranks to head the programmes department of a 24 hours broadcast station, NTA Lagos.

Hajia Aminah Muhammad is a one-time Amirah (Woman President) of The Movement for Islamic Culture and Awareness (MICA), former Secretary NANTAP, and a former Publicity Secretary of University of Ibadan Alumni Association; Lagos State Branch. She is also a member of Muslim Media Practitioners of Nigeria. 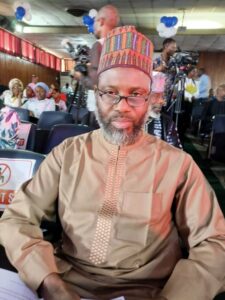 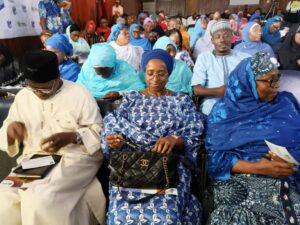 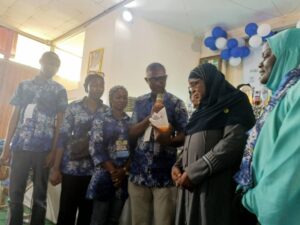 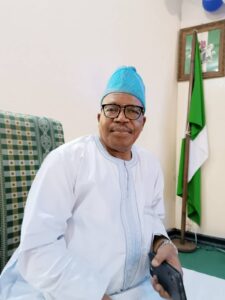 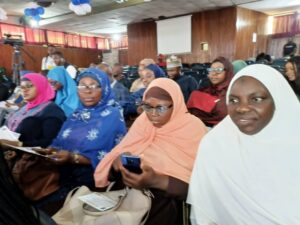