How Firdaus Amasa Broke the Hijab/Call to Bar Jinx

Tuesday, July 21, 2018 will forever remain historic for the millions of Nigerian Muslims who witnessed the Call to Bar of Miss Firdaus (also spelt as Firdausa) Amasa Al-Jannah with her Hijab on, amidst jubilation.

The law graduate, Ms Amasa was denied entry into the International Conference Centre venue for the previous Call to Bar ceremony for refusing to remove her Hijab, a compulsory apparel for Muslim ladies who have attained puberty.

Barrister Amasa was among the 1,562 successful candidates in the April 2018 Bar final examination of the Nigerian Law School who were eventually called to bar on Tuesday, July 10, 2018.

How The Story Was Broken

The immediate past President of the Muslim Lawyers’ Association of Nigeria (MULAN), Dr Kamal Dawud, whose tenure ended on July 6, had earlier confirmed the news that Firdaus Amasa would be called to bar with her Hijab on.

Speaking with Muslim News shortly after the news first broke on Thursday, June 21, 2018 that the Body of Benchers (BOB) has invited Ms Amasa to attend the July 2018 Call to Bar with the Hijab, Dr Kamal said the new development is a victory for Firdaus Amasa and every school girl in the Hijab .

“Yes, it is true. She’ll be allowed to attend the next Call to Bar in her Hijab”, Dr Kamal said with excitement, adding that, “not only her, other female law students in Hijab will not be harassed again during Call to Bar.”

Ms Amasa, a graduate of law from the University of Ilorin, was denied access to the Call to Bar ceremony in Abuja over her refusal to remove a shoulder-length Hijab worn beneath her wig in December 2017.

The news dominated the media landscape for a long while and generated spontaneous reactions from the Muslim community, while various trending hashtags such as #JusticeForFirdaous and #IStandWithFirdaous spread like wildfire.

The House of Representatives waded into Firdaus’ case by setting up a committee to investigate the circumstances that led to the controversial Call to Bar denial of Ms Amasa by the Nigerian Law School over the removal of the Hijab, a compulsory apparel for Muslim women.

The move by the House of Representatives to conduct public hearings on two different occasions on the issue were stopped by eight Christian lawyers under the aegis of Coalition of Lawyers for the Preservation of Legal Practitioners’ Ethics, who filed a suit and got a restraining order from the Abuja High Court.

Muslim News reliably gathered that the Body of Benchers (BOB) held a series of meetings over the Firdaus Amasa Hijab imbroglio with the Nigerian Law School, which led to her stoppage from being called to bar.

Dr Kamal said a sub-committee was constituted to investigate and look into the incident that led to Ms Amasa’s disqualification from the Call to Bar, adding that the committee’s deliberations “included the case of another candidate, Aisha Zubair, whose Hijab was roughened.

“Amasa Firdaus, Aisha Zubair and other students of the Nigerian Law School met with the committee. The committee deliberated and filed its interim report sometimes ago and was asked to complete its work and submit the final report, which was done on Thursday, June 21, 2018.

“Although the report was not considered for reasons best known to them, both Christians and Muslims in the Body of Benchers, after extensive deliberations, finally agreed that she should be called to bar in her Hijab, because this is an issue of right and as we speak, there is no law which prohibits her from using the Hijab”, he noted.

The Associate Professor of Law at the University of Maiduguri stressed that the 2016 Lagos Appeal Court ruling in favour of Hijab on school uniforms was a reference point for Nigerian Law School students who intend to adorn the Hijab to obey their Creator. 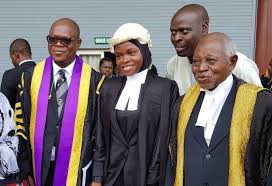 He said: “More so, there is an existing precedent, the Appeal Court judgement on the Hijab, which says a student can use the Hijab on school uniforms. This is also applicable to the case of Firdaus, because she is also a student.

“Denying the use of the Hijab is denying a fundamental right, and the matter is still before the Supreme Court. Hence, the decision of the Court of Appeal still stands. As such, they said she should be called to bar in the next Call.

In another development, Barrister Mutiat Orolu of the Hijab Advocacy Initiative faulted a report which accused the Body of Benchers of contempt of court for taking a decision over Firdaus Amasa’s Hijab saga while her case is still in court.

Hajia Orolu, a Hijab-wearing Muslim lawyer who has been at the forefront of Hijab advocacy in Nigeria said the matter before the court is a different case, which cannot stop the BOB from deliberating and taking a decision on Amasa’s case.

According to her, “It cannot amount to contempt of court. It is a matter between 7 Christians and the House of Representatives. The BOB is not a party to the case. It was the Christians that dragged the House of Representatives to court. They said the House doesn’t have the right to hold public hearings on Firdaus Amasa’s case. It is not a legislative matter but a fundamental right, which can only be handled by the judiciary. And they got a restraining order, which was why the public hearing was adjourned and later postponed indefinitely.

Hajia Orolu added that the news that Ms Amasa will be allowed to use the Hijab has overtaken the Abuja High Court case.

The Uncertainty That Followed The Report

All efforts to speak with members of the Committee, members of the Body of Benchers and officials of the Nigerian Law School proved abortive, after waiting for almost 72 hours.

There were however unconfirmed and unsigned reports circulated online indicating that Ms Amasa would only be allowed to wear “a head scarf to cover her hair, similar to what female judges from lower courts to the Supreme court use, and not a partial face covering of any sort” for the July 2018 Call to Bar resit ceremony.

The report, reads in part: “BOB is yet to consider the report of the committee chaired by Belgore JSC (Olanipekun SAN, Ofodile SAN, and Lady Debbie) as the said report is not yet ready or ripe for consideration.

“The report will be formally presented and adopted for discussion by the BOB on a future date and a standard position taken thereafter as to dress codes for call in view of this development.

“However in view of the imminent Call to Bar ceremonies in July 2018 and Miss F Amasa’s petition, a position was taken on the applicant’s current petition on the subject. It was decided that:

“- the applicant was indeed rude and impolite to a former CJN ( Belgore JSC) who had intervened at the Call ceremonies but rebuffed by the applicant, and therefore must tender a written apology.

“- It was recognized that moslem Judges while sitting wear only head scarf to cover their hair and not partial face covering of any sort, as exhibited by the applicant’s attire. If she will be called therefore, she cannot use more than the hair covering scarf, similar to what female Judges from lower courts to Supreme Court use.”

In his reaction, Prof Lakin Akintola, the Director of Muslim Rights Concern (MURIC) said: We are now aware of two versions of the story on the decision of the Body of Benchers on Amasa Firdaus’ call to bar.

The implication of two versions of the decision of the Body of Benchers on Amasa Firdaus is that both reports confirm that the BOB resolved to call Amasa to bar in a moderate Hijab. So there is still every reason to rejoice. 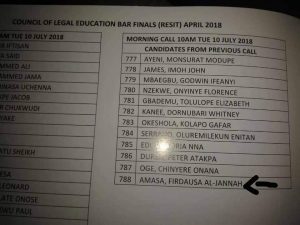 According to the second version, the BOB also resolved to deliberate on appropriate dress code generally. That means more news is still coming for other hijabites called to bar in future.

But it may be more than that. Perhaps the BOB wants to take a a holistic look at the dress code in the Law School. For example, must lawyers always appear in colonial attire? It is going to be interesting.

Whichever version is true, the BB still deserves our commendation for its maturity and dignifying disposition.

He therefore advised the Nigerian Muslims to be humble about this development.

“Our language must be refined. Let us not seek revenge because our religion lays emphasis on forgiveness. Allah has used Amasa Firdaus to liberate sisters in hijab and this is a great achievement. Revenge is cheap. It is petty. It is often a square peg in a round hole. Forgiveness is kindness, generousity and largeness of heart.”