Surprisingly, the Firdaus (also spelt as Firdausa) Amasa Al-Jannah Hijab victory, which was received with joy by all lovers of truth and haters of oppression – Muslims and Christians alike – did not make the covers of the top seven (7) Nigerian newspapers of Wednesday, July 11, 2018.

The newspapers are The Punch, The Guardian, Vanguard, The Nation, Daily Sun, Daily Trust and ThisDay.

Following the development, a public affairs analyst, Dr Joe Abah tweeted thus: “Congratulations to Amasa Firdaus who has now been called to the Nigerian Bar with her Hijab. I am proud to have stood on the side of honour in her case. I am proud that I don’t bay with the mob or run with the herd. The truth will always prevail.”

Ms Amasa was among the 1,562 successful candidates that were called to bar at the July 10, 2018 ceremony held at the International Conference Centre, Abuja.

Ms Amasa, a graduate of Law from the University of Ilorin, was denied access to the Call to Bar venue in December 2017 over her refusal to remove her Hijab, a mandatory attire for every mature Muslim lady, worn beneath her wig.

The news dominated the media landscape for a long while and generated spontaneous reactions from the Muslim community, while various trending hashtags such as #JusticeForFirdaous and #IStandWithFirdaous spread like wildfire. 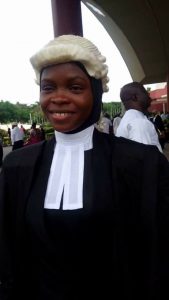 The House of Representatives waded into Barr Firdaus case by setting up a committee to investigate the circumstances that led to the controversial Call to Bar denial of Ms Amasa by the Nigerian Law School over the removal of the Hijab, a compulsory apparel for Muslim women.

The move by the House of Representatives to conduct public hearings on two different occasions on the issue were stopped by seven Christian lawyers under the aegis of Coalition of Lawyers for the Preservation of Legal Practitioners’ Ethics, who filed a suit and got a restraining order from the Abuja High Court.

Seven months later however, unlike the denial story which went viral and dominated the media for weeks, the Council of Legal Education’s decision to call Ms Amasa to bar with her Hijab on during the week did not grace the covers of major Nigerian newspapers.

Ms Amasa’s story was conspicuously missing on the covers of The Punch, The Guardian, ThisDay, Daily Sun, Vanguard, The Nation and Daily Trust.

However, only Nigerian Tribune and New Telegraph found it worthy to give the Ms Amasa story a cover mention, beneath their nameplates, with the headlines; “Law School calls Firdaus Amasa, 1561 others to bar” and “Hijab-wearing lady, 1561 candidates called to bar” respectively.

Nigerian Muslims were however not surprised about the development, as many of them already took to social media (Facebook, Twitter and WhatsApp) to rejoice with Barr Firdaus, whom they have described as a courageous fighter for justice.

When contacted on this development, a veteran journalist, Elder Yinka Salaam responded thus: “No rational daily or media outfit whatsoever should have ignored a story of such prominence, with local and international significance. This is one story that has forced a team of lawyers who claimed to be defending the sanctity of the law profession to the law court. This is also the same story that has brought the judiciary and the National Assembly into collision, thereby preventing the House of Representatives from holding a public hearing.

“Except blinded by rapacious bigotry and corrosive sentiments, what else would have determined the news judgment of an editor when a volatile story that had practically pitched Muslims and Christians against each other is resolved in a unique way, dousing the tension all the way.

“This is an incident that has attracted the attention of international media outfits and threatened to further polarise us in an already fragile nation.

“More so, if Amasa’s story that had virtually turned Nigeria’s legal profession into a laughing stock internationally got resolved in such an amiable manner, it is only logical that the same fervour, vigour and zeal displayed during the Hijab denial, the court case and the public hearing should equally be displayed here.

“But come to think of it, why must Nigerian media always blind themselves to success stories and why are we always quick to propagate and spread evil, violent and negative stories. This development calls for a serious rethink and urgent action by the leaders of this noble profession, before its image is dented irretrievably in the eyes of the public”, he said.

In his reaction, the Lagos State Chairman of the Nigerian Union of Journalists (NUJ), Dr Qasim Akinreti said the fact that some major newspapers didn’t give the story prominence on their covers is inconsequential.

According to him, “A news is a news. A story is a story, even if it is a 2-paragraph story. Once it has been highlighted, the mission is actualised. If you Google Firdaus Amasa’s Call to Bar story, you would surely see considerable results. Her picture in the Hijab would also appear. That alone is an achievement. I am fulfilled.”

The multi-media journalism lecturer said Muslims should understand media dynamism, adding that, “At the time the Amasa story broke, the media already had other newsworthy items, mostly for their cover pages. Don’t get me wrong, Amasa’s story is also newsworthy, but it is the newspaper that would determine which story would lead the paper.”

Akinreti commended the broadcast media for their objective reporting of Firdausa’s Call to Bar ceremony.

He said: “The broadcast media did a wonderful job. It was the major headline of Channels TV and TVC, and Firdaus’ face in the Hijab was prominent. That to me alone has taken the shine off others, including the mainstream media.”

He concluded by urging Muslims to invest more in the media.

The point is, we Muslims need our own media houses. If not, the Nigerian media being the creation of the neo Western imperialists would continue to twist the fact, distort the news and give a double standard reportage.

Our cries and lamentations over the hypocrisy of our media men would make no meaning, as things would continue perpetually on the same plane.

AbdurRasheed, beyond your constant mentioning of these evils in the social media and your written books what are you doing again? While I respect your courage, your dauntless spirit and your zeal for Islam which always inform your actions, I wish to submit that we all need to transcend theoretical level of mere lamentation and move to the stage of concrete action.

JazakumuLlahu Khayran. We are working towards building our own media platforms. I am about to float Muslim News Magazine and Newspaper, with its first ever special edition on Firdaus Amasa. (This newspaper you’re reading now) The print version will be released before the end of this week, biqudratiLlah.

I am sure others are also working hard to do the same, on both online and broadcast media. We all need to show support, morally, financially and spiritually. May Allah make it easy(Amin).

Notwithstanding, those will not stop me from demanding for ethical journalism. Media must be responsible. If I own a media platform today for the purpose of Project Islam, I will still continue to critically examine and analyse the Nigerian media’s reportage of Islam and Muslims. This is not for today, but for the generations of Muslims after us to know how some of us fought against media stereotyping.