They are among the most influential leaders in Africa and they wield so much power in their respective countries, but when they went for Hajj, they had to take their places within the ranks of common men, in total submission to the dictates of Allah.

The President of the Francophone country arrived in Jeddah on Saturday, August 18 with his Prime Minister, Amadou Gon Coulibaly and members of his cabinet to perform the Hajj, the last pillar of Islam in Makkah, the spiritual capital of the Kingdom of Saudi Arabia and the Muslim world.
Upon arrival at King AbdulAziz International Airport, Alassane was received by Prince Meshaal bin Majid bin Abdulaziz, Governor of Jeddah Province, and a number of officials. 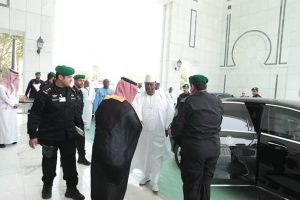 While in the Holy Land, Alassane had a surprise contact with the Ghanaian Vice President, Alhaji (Dr) Mahamudu Bawumia, who had earlier arrived Makkah on Friday, August 17, together with his Hijab-wearing wife and Ghana’s Second Lady, Hajia Samira Bawumia.
Alhaji Bawumia currently occupies the second highest office in Ghana. He was ushered into power together with his boss, His Excellency, President Nana Addo Dankwah Akufo-Addo on January 7, 2017.
The meeting of the two powerful international economists at the most sacred place on Earth took place a day after Arafat, the climax of Hajj rites, which is also the day the Muslims in Ivory Coast and Ghana joined their Muslim counterparts across the world who were not performing the Hajj to celebrate the Eid-ul-Adha.
Submission to Allah
Muslim News’investigations revealed that the two African leaders later adorned the Ihram (white, plain spiritual garments), which signifies the oneness of the human race and the simplicity of life, as they joined over two million Muslim faithful to perform the 2018 Hajj.
The two powerful men had to take their place within the ranks of other common Hujjaj (pilgrims), even though they hold powerful positions in their countries.
They had to humble themselves and join thousands of Ghanaian and Ivorian Muslims, as well as millions of Muslims of other nationalities from around the world in performing this year’s Hajj.
They spent some time praying for peace and prosperity for their countries and their citizens, and they met to share a meal, clad only in white cloth and barefooted, without the heavy security normally associated with their movements in their respective countries.
These signs of humility and submissiveness are the manifestations of Allah’s word in the glorious Qur’an, where He says:
“O mankind, indeed We have created you from male and female and made you peoples and tribes that you may know one another. Indeed, the most noble of you in the sight of Allah is the most righteous of you.” – Qur’an 49: 13
The Eid Feast Reception
The Ivory Coast President and members of his cabinet were later hosted by the Custodian of the Two Holy Mosques, King Salman bin AbdulAziz. President Ouattara posted on his verified Facebook page:
“At the invitation of King Salman Ben AbdelAziz Al Saud of Saudi Arabia, I participated in the annual traditional ceremony marking the end of the Hajj Edition 2018.” 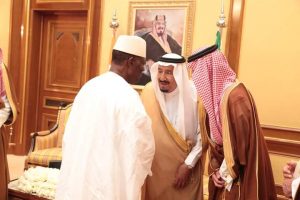 Muslim News learnt that the two leaders met at the Royal Court in Mina Palace, where Ouattara congratulated and celebrated with the Saudi King on the advent of the Eid-ul-Adha holiday.
He also praised Saudi Arabia’s great efforts in organising the Hajj pilgrimage, as reported by the Saudi News Agency.
The meeting was attended by Prince Khalid Al-Faisal bin AbdulAziz, Advisor to the Custodian of the Two Holy Mosques, Governor of Makkah Region, Chairman of the Central Hajj Committee, and a number of officials.