Nigeria and the needless Hijab “Wahala”

Why should the use of the Hijab be an issue in any sane society? Why should a mere head covering become a hitch factor in Nigeria, a country that has always claimed to have regard for citizens’ fundamental human rights as entrenched in the Constitution? Why should there be wa-ha-la (a Yoruba word for “trouble”) over the use of the Hijab – the compulsory dress code for Muslim ladies – in public institutions that are run with taxpayers’ money?

These among many other mind-boggling questions readily come to mind following the illegal and unlawful decision by the Council of Legal Education (CLE) to ban, yet again, in another dramatic but unconstitutional move, the use of the “Hijab” at the 2017/2018 Nigerian Law School First Term Law Dinner, held between Tuesday, February 13 and Thursday, February 15, 2018 across the six Law School campuses.
Note that the “Hijab” is in inverted commas because what the Nigerian Law School prevented the female students from using is not the flowing garment (Hijab) enjoined by Allah (SWT) and His Prophet (PBUH). The Hijab, a loose head covering for Muslim ladies, must cover their nudity and the exogenous or tempting parts of their body. The rulings for the Hijab is contained in Qur’an 24: 30-31 and 33: 53, 59.
More so, the Muslim female law students did not request for an ideal Hijab or even Niqob (veil), which is part of the religious dress code for Muslim women, yet there have been serious wa-ha-la over its usage, especially from those who have no business with the apparel. Unfortunately, the “ban” of the Hijab in the Law School, an institution where future lawyers are nurtured, was and is still being championed by the very people who are supposed to be the custodians of the same law. What an irony!
Interestingly, there is no constitutional provision for the prohibition. There is also nowhere in the circular issued by the Council of Legal Education (CLE) where it is categorically stated that the Hijab is prohibited! The “Regulation Wear” as stated in two separate versions of notices informing the students of the Law Dinner, reads thus: “For males; black suit, white shirt, plain black tie (not bow tie), black socks, black cover shoes (sandals are not allowed) and white breast pocket handkerchief.” 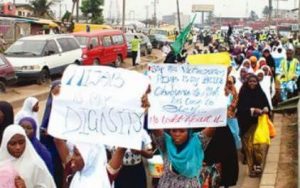 Ladies are to wear plain black skirt (below the knee), black suit and white shirt (with a warning that “there should be no frills, glitters, embroidery and/or trimmings of any type). They are also free to wear black cover shoes with the exception of sandals, lace ups or peep toes, which are glaringly prohibited.
Only moderate jewelry should be worn, and no large dangling or coloured earrings or bracelets are allowed. Also, hair attachments, braids, glitters or colouring of any type on the hair are prohibited. As for weave-on, the Council stated in the circular that it is permitted “only if it looks natural, packed and undetectable”, though “coloured weave-on is prohibited.”
According to the circular, there is nowhere the Hijab is forbidden. If it is not allowed, that would have been specifically stated, like it was in the case of other prohibited dress types. Yet, the officials of the Council of Legal Education threatened to punish Muslim ladies who want to obey their Creator and exercise their constitutional rights as guaranteed in Section 38 (i) & (ii) of the 1999 Constitution (as amended).
Sadly, the law breakers allowed the poor Muslim ladies to wear only skull caps in four of the six campuses, which to them is better than using nothing. Sad!
If I may ask, what has the use of the Hijab or its ban got to do with the legal profession, when the British that brought the white-horse wig have begun the move to eliminate the 17th-century dress code? In actual fact, other countries such as India and Kenya that were similarly colonized by the British have come of age, jettisoned the wig and allowed cultural integration to permeate their systems.
Few days ago, I was watching scenes of a courtroom drama in a Bollywood movie, “Pink”, featuring multiple award-winning actor, Amitabh Bachchan. In all the scenes, I noticed that both the judge and the lawyers did not wear wigs.
Same goes for other Bollywood films, which are often used to promote the Indian culture. Unlike the case of the Hijab, a Sikh lawyer is free to wear the turban any time any day, because it is a compulsory religious obligation meant to cover his hair, promote equality, and preserve the Sikh identity.
India was wise to have accepted development and rejected the white man’s century-old tradition – the use of wigs. But in Nigeria, the reverse is the case. We reject development and obstinately embrace the archaic cultures hook, line, and sinker. That is the same reason Nigeria is still struggling to produce several basic commodities 57 years after independence. Isn’t that pathetic and worrisome?
Today, many young and intelligent Muslim ladies are finding it extremely difficult to wear the “Hijab” in Law Schools. Many of them have given up on the Hijab because of their love for the legal profession, except the very few conscious ones who dared to challenge the status quo and are ready to damn the consequences.
There are many instances, but the case of Miss Firdausa Amasa immediately comes to mind. Despite graduating from the University of Ilorin with a Second Class Upper degree in Law, and performing brilliantly well at the Law School, she was barred from the Call to Bar ceremony simply because she refused to remove her “Hijab”!
Miss Amasa’s case attracted the attention of international media following popular outcry and massive social media advocacy, with the hashtag #JusticeForFirdaus, championed by Muslims and non-Muslims alike. In a swift reaction, the House of Representatives set up a committee to investigate the matter and thereafter called for a public hearing earlier scheduled for Tuesday, February 6, 2018, before it was postponed indefinitely. It is sad that some mischievous elements filed a suit at the Federal High Court, Abuja to stop the public hearing on the Hijab.
This is one of the serious cases of human rights violations against Muslim women, but often times such violations are dismissed as “irrelevant” because they are religious and the victims are often Muslims. Worse still, Nigerians are good at name calling and inciting comments, similar to what they did for Miss Amasa, who was only fighting for her right and the rights of the oppressed Muslim ladies.
Unfortunately, the victimisation against the Hijab transcends the Law School. At every sector and level of government in Nigeria, the harassments against women in the Hijab have continued unabated. Lagos, for instance, has the highest number of cases of Hijab rights violations in Nigeria, which was quite rampant during the 8-year administration of the former Governor, Babatunde Raji Fashola, the current Federal Minister of Power, Works and Housing, who is equally a Muslim and a Senior Advocate of Nigeria (SAN). However, many of the cases were either swept under the carpet or underreported by the media. 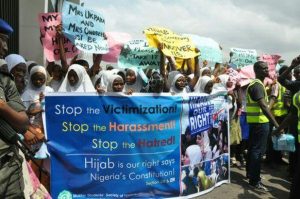 There was the case of Aisha Alabi, a 14 year old (as at 2013) student of Kadara Junior Grammar School, Ebute-Metta, Lagos, who was flogged with 42 strokes of the cane by an overzealous non-Muslim teacher. The assault against the young Bareerah Tajudeen, Maryam Sulayman and Asiyah Abdulkareem over the Hijab are also still fresh in our memories.
Despite continuous victimisations, the Muslim community refused to take the into its hands. In fact, the Muslims had applied different lawful means such as dialogues and peaceful protests in the past before the court option, which is believed to be the last hope of the common man.
Despite losing at the Lagos High Court, the Muslims proceeded to the Appeal Court, where five judges held that the ban of the Hijab in Lagos schools violated the fundamental human rights of Muslim students and is therefore wrongful and unconstitutional! 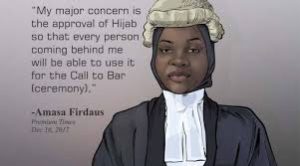 But have the students been able to use a shoulder-length Hijab with the same colour as their school uniforms in Lagos schools? No! Absolutely No! You can see why I say “Wa-ha-la dey”! What have the influential Muslims in politics and business done to bring succour to the oppressed Muslims?
Rather than uniting over the areas of common interest and fighting for the rights of their brethren-in-faith, some “holier than thou” Muslims are busy condemning the efforts of other Muslim groups. The Hijab saga is just one out of the plethora of challenges bedeviling Nigerian Muslims. Wa-ha-la dey, seriously!
I hereby call on the Muslim women to despair not, for the Hijab victory is near. I call on the Muslim students who resisted the threat over the use of the Hijab during their dinner on Wednesday, February 14 to be #StrongInHijab! “No affliction ever comes but with Allah’s permission.” Qur’an 64:11
And to those sisters who were not bold enough to use the Hijab, particularly at the Victoria Island, Lagos campus due to the threats and the fears therefrom, I say;  Indeed, there is light at the end of the tunnel. “Surely, We will support Our messengers and those who believe in the life of this world and on the Day when the witnesses will stand.” Qur’an 40: 51
Surely, for the Hijab in Nigeria, it is going to be a bloodless and violence-free victory, BiqudratiLlah.
“And surely Our hosts, indeed, will be the overcomers.” Qur’an 37: 173
– By Rasheed Abubakar /Twitter @rawshield123