Why Hon. AbdulHakeem Abdul-Lateef deserves to win the Lagos Man of the Year 2018 Award

– Without peace in Lagos, it can never be a Mega City

Imagine the effects of religious crisis on the economic, social and infrastructural development of any nation? Going by happenings around the world, that would no doubt be devastating!

The Syrian civil-turned-proxy war quickly comes to mind. The once bubbling nation has been turned to a ghost of itself, and Syrians now need $1 trillion dollars to rebuild their nation, and that is if the war stops today. One of the causes of the war is religious tension.

The crisis in Northeast Nigeria – provoked by the Boko Haraam extremist group – has led to the death of thousands of innocent people, with millions displaced and thousands of cases of violations of human rights.

However, in metropolitan Lagos, which is considered to be the commercial hub of and the most populous city in Africa, people of diverse languages, religions, ethnics and races have been living in peace for years.

Lagos, with a population estimated to be 21 million as at 2016, is four times bigger than Borno State – one of the theatres of war in the Northeast region, population five million plus as at 2016 – yet the Centre of Excellence has not recorded any religious crisis in recent years.

This is because the man in charge of managing the practice of religions in Lagos State, Honourable (Dr) AbdulHakeem AbdulLateef, Commissioner for Home Affairs, has assured all and sundry that the State will remain crisis-free for Lagosians and foreigners alike, to live and invest in.

In a recent interview, he attributed the conflict-free ambience of Lagos to the Governor Akinwunmi Ambode-led government’s initiative on peace and religious harmony, which involves Muslims, Christians and members of other religions.

The Ministry of Home Affairs under the Ambode administration has been able to curtail religious discrimination among Lagosians, who are known for diversity in language and religion.

Hon. (Dr) AbdulLateef, who is contesting for the Lagos Man of the Year 2018 award, said: “No one suffers religious discrimination in Lagos, as citizens experience the best of religious freedom, practice and fraternization.

“Lagos is the only state that gives effective operation to the tenets of the Nigerian Constitution on religious freedom, by fully implementing the relevant Section 42.”

Many of Hon. AbdulLateef’s fans have begun campaigns on social media, calling on residents of Lagos and Nigerians to vote for him as the Lagos Man of the Year 2018.

Honourable AbdulLateef is the only Commissioner in Governor Ambode’s cabinet who was shortlisted alongside others for the prestigious award. He will be slugging it out with other achievers in the public and private sectors who have also done the state proud in their respective fields. 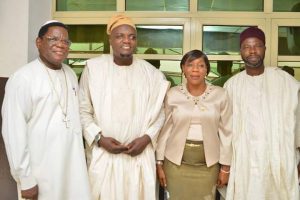 Lagos under the Ambode-led administration has ensured that there is a robust relationship between adherents of all religions.

This was made possible through extant bodies such as the Nigeria Inter Religious Council (NIREC), Lagos State chapter, which is domiciled under the Ministry of Home Affairs. 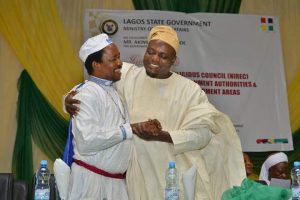 Dr AbdulLateef explained that besides the State leadership of NIREC, Governor Ambode recently appointed 798 Christian and Muslim members for the body at the grassroots in a bid to continuously improve the current unprecedented level of peace and religious harmony being enjoyed in Lagos, “while also sustaining and deepening the on-going development, modernization and infrastructural expansion in the state”, he added.

Preaching of Love to All 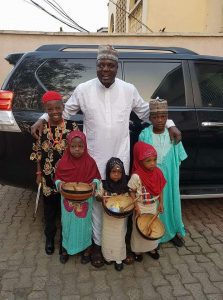 Commissioner AbdulLateef, who doubles as the Amir-ul-Hajj of Lagos State, is also a popular Muslim preacher on radio, TV and social media. He has used his position to preach love among Nigerians and unite Lagosians of different religions.

According to him; “I am happy when I inspire people. I am happy when people call me to say ‘my marriage was about to break up until today when I listened to your message, and we have resolved it’. 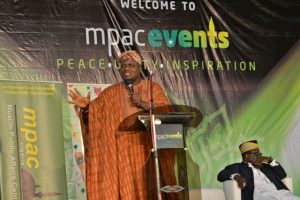 “I see that as a great achievement more than anything in this world. So many Christians have called me to say they don’t miss my lectures, because the approach is experiential and practical. That is my greatest joy.” 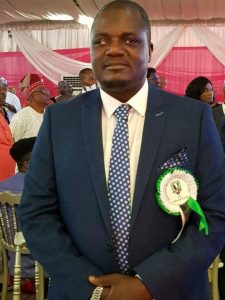 The Lagos State Muslim Pilgrims Welfare Board under the leadership of Honourable (Dr) AbdulLateef was rated the best performing State during the 2016 Hajj exercise after winning 7 awards in different categories. The Story was not different in 2017, the State was also adjudged best by both Nahcon and Independent Hajj Reporter.

As the Amir-ul-Hajj, Hon AbdulLateef disclosed that the government under the leadership of Mr Akinwunmi Ambode saved over N4.5billion from the stoppage of pilgrimage sponsorship in the last three years, despite refunding about N30 million to the 2017 pilgrims. 2015 pilgrims also benefited from a refund of about N50 million.

A few days ago, in far away Saudi Arabia, Lagos State, under his leadership as the Amir-ul-Hajj, emerged first place in pilgrims management across the federation, as announced by the National Hajj Commission. 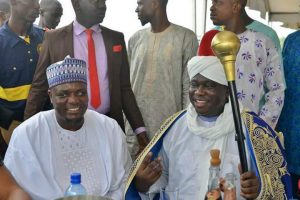 Being a senior legal practitioner who has spent over 25 years at the Bar, Barrister AbdulHakeem is a lover of justice and fairness. He does not condone lawlessness, even among his Muslim brethren. He has on several occasions preached against closing of roads on Jumah (Friday prayer) or Sallah (Muslim Eid prayer) days. 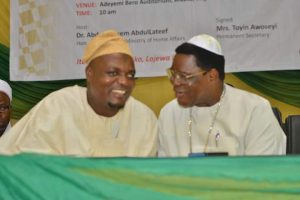 Honourable AbdulHakeem has consistently frowned at the practice of traditional Oro worshippers limiting human and vehicular movements during their celebrations in Lagos, although the practice still continues in Ikorodu and other parts of the State. He is of the opinion that such celebration be restricted to night affairs without infringing on fundamental human rights of other Lagosians and Nigerians at large.

He said: “No one should obstruct public space, as this is not only dangerous to everyone; it is also not allowed by any religion.

“In the spirit of religious tolerance and freedom, Muslims and Christians have no right to obstruct the activities of others, just as the traditional worshippers must not obstruct or infringe on the rights and dignity of people of other faiths”. 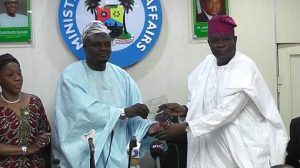 Several places of worship – including churches and mosques – and hotels, clubs and bars have been shut down over noise pollution.

In June 2016, no fewer than 70 churches, 20 mosques, 10 hotels, and several pubs and club houses were closed after residents made official complaints over continuous noise.

Noise pollution as at 2016 has reduced by 35%. The Agency’s General Manager, Bola Shabi said the policy’s enforcement is a continuous exercise, stressing that: “We have set a target for ourselves. We want to ensure that Lagos is noise-free by the year 2020”.

The successes being celebrated today in Lagos partly through the efforts of Commissioner AbdulLateef’s Ministry of Home Affairs could not have been achieved without the cooperation of the Lagos Muslim Community. Despite the Lagos State Government’s refusal to allow the use of the Hijab in public secondary schools in line with the Appeal Court verdict, Lagos Muslims have continued to maintain decorum in demanding for their rights.

When Honourable AbdulLateef was recently criticised by some Muslims following his remarks that Lagos will not allow the Hijab for secondary school students until the final verdict by the Supreme Court, the overwhelming majority of Muslims defended him, even before it was later discovered that he was misquoted by the media.

Popularly known as Honourable Iyepe, an alias for a creature that will eventually die and return to the soil, Dr AbdulLateef has served three Executive Governors of Lagos State – Asiwaju Bola Ahmed Tinubu, Babatunde Fashola (SAN) and the current Mr Akinwunmi Ambode in different capacities. He was a former lawmaker and Chairman, Committee on Judiciary and Public Petitions at the Lagos State House of Assembly.

Born on the 21st of August, 1967 to the Royal Awori family of Ejigbo in Oshodi-Isolo Local Government Area of Lagos State, the multiple award winning scholar, legal icon, public speaker and good governance strategist is a graduate of Law from the University of Lagos and an alumnus of the Harvard Kennedy School of Government, Boston, United States of America, among other illustrious achievements.

Dr. Lukman AbdurRaheem, Chief Coordinator of the “Vote for HC as Lagos Man of the Year” Campaign Council has called on Lagosians to vote for Honourable AbdulLateef when the voting starts on September 3rd.