The ancient city of Ibadan, the Oyo State capital, will be agog tomorrow, Tuesday, September 11, for the 1440 Hijrah Grand Rally, an initiative of the National Council of Muslim Youth Organisations (NACOMYO), Oyo State chapter.

The theme of the most anticipated event is “Equity, Justice and Fairness, Essentials of a Stable Policy; Muslims on Call”. 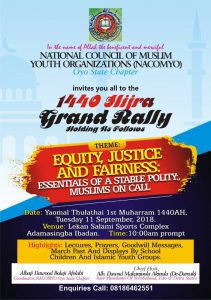 The Governor Ishaq Abiola Ajimobi-led government of Oyo State, in the spirit of fairness and oneness of Nigerians, has declared tomorrow, Tuesday as a pulic holiday for the Oyo State Muslim Community to mark the Islamic New Year.

The Hijrah holiday, which is also observed in Osun, Kano and other States, will feature the presentation of an award to the Hijab heroine, Barrister Firdaus Amasa, for her struggle to protest and change the long-standing narrative of being called to bar without the Hijab.

The annual event, which will hold at the Lekan Salami Sports Complex, Adamasingba, Ibadan will also feature a series of entertaining programmes such as a march by Muslim students and soul-inspiring lectures from renowned Muslim scholars.

Barrister Amasa, who has been celebrated by different Muslim and non-Muslim organisations across Nigeria, thanked the organisers for the award.

Both the Hijrah and Firdaus Amasa editions of Muslim News will be available for sale at the venue.