Like Ahmad Dawabsheh, Real Madrid hosts Palestinian heroine, Ahed Tamimi amidst heavy criticism from Israel
…presents her a customized Real Madrid jersey
+ Nigerian rights group praises club
The young Palestinian heroine, Ahed Tamimi, who was recently released from Israeli jail after a video of her slapping and hitting two occupation soldiers who shot her cousin in the head went viral, has been honoured by the Real Madrid football club in Spain.
Tamimi, who served an eight-month jail term in Israeli prison alongside her mother, Nariman, was received by the management of the world’s richest football club at the Estadio Santiago Bernabeu on Friday, before the anticipated derby between the club and Atletico Madrid yesterday, Saturday.
It was a warm reception for the young Palestinian activist in Madrid as Emilio Butragueno, a former striker for Real Madrid who currently serves as one of the club’s senior managers was captured presenting Tamimi the team jersey with her name printed on its back.
It would be recalled that in 2016, the Spanish football giant hosted a Palestinian boy, Ahmad Dawabsheh, who was the only survivor of a West Bank firebomb attack on his family by Israeli extremists, at the Santiago Bernabeu. 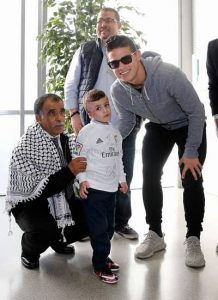 Like Tamimi, the Palestinian boy was also presented with the team jersey with his name printed on its back, after meeting several Madrid star players, including his hero, Cristiano Ronaldo, who has since joined the Series A club, Juventus since the beginning of the 2018 season.
Poor Ahmad Dawabsheh, who is now 7 years old, lost his parents and his 18 month old baby brother, Ali, when Israeli settlers set their home on fire in the West Bank town of Duma.
Demolition of Palestinian homes and expansion of illegal settlements by the Israeli forces in the West Bank has been on the rise. In 2016 alone, the United Nations Office for the Coordination of Humanitarian Affairs (OCHA) reported that 1,094 demolished structures left 1,601 Palestinians, including 759 children, internally displaced.
Palestinian minors like Ahmad and Tamimi have been exposed to all sorts of abuses in the hands of the Israeli forces in the last 70 years of illegal occupation.
“I think this is one of the reasons Real Madrid is so much concerned about impacting the lives of youth positively, apart from football and winning trophies”, a Nigerian rights group, Muslim Awareness International (MAI) said, in defense of Real Madrid as the team faced heavy criticism from the Israelis, who have always regarded the Palestinian resistance as an act of terror.
The Director of the group, AbdulWaheed Atoyebi hailed the Club for identifying with the defenceless children of Palestine, without minding whose ox is gored. 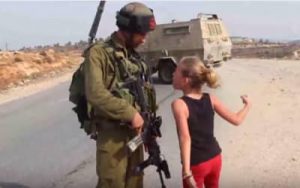 According to him, the Real Madrid community is not limited to Spain’s capital city alone, as it has fans (Madridistas) all over the world.
“As a club which values youths’ positive development, it cannot fold its arms and look on as the Palestinian youths and aged are being constantly oppressed and killed in several ways the human mind cannot imagine.
“So in its own little way, Real Madrid has extended its open arms to host Palestinian children and show them that the world is a much better place with good hearts than what they’ve experienced all of their lives in Palestine, thanks to the Israeli oppressors”, he added.
– Rasheed Abubakar/ with Agency reports