Ibadan, Oct. 1, 2018: Renowned Scholars and stakeholders will converge in Ibadan on Saturday Oct. 6, to discuss the history of Islam in Yoruba land.

The International conference being facilitated by the Muslim Ummah of South West Nigeria (MUSWEN) was part of the activities lined up to mark the 10th year anniversary of the group.

A statement by the Chairman, Conference Planning Committee, Professor Muhib Opeloye and 10th Anniversary Committee, Alhaji Yisa Abdulkareem indicates that the maiden conference will hold at the International Conference Centre, UI, Ibadan, Oyo state from 10 am. 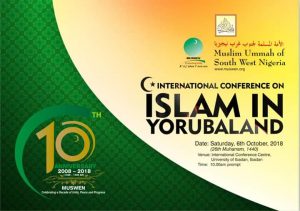 The conference which has as its theme “Islam in Yorubaland: Progress and Challenges”, will feature intellectual and scholarly presentations .

It will be presided over by the Chairman of MUSWEN Board of Trustees, Prince (Judge) Bola Ajibola.

The League of Imams and Alfas in the South West as well as prominent Muslim groups and scholars are equally expected at the one-day conference.

The Executive Secretary of MUSWEN, Prof. Daud Noibi (OBE) will host scholars and Muslims from across the Southwest and beyond at the programme which will hold under the leadership of MUSWEN President and Conference Convener, Alhaji Sakariyau Babalola.

Muslim Ummah of the Southwest Nigeria (MUSWEN) was established in August, 2008 with the aim of uniting the Muslims in the six states that make up the region and foster the development of the Ummah in the country.

MUSWEN prides itself as a unifying factor for the Muslims in the region and beyond and thus, the 10th year of existence is described as decade of unity, peace and progress.