HAMAS sends condolences to the victims of Pittsburgh synagogue

‘We’re sorry to hear about the terror attack’

HAMAS, the Palestinian resistance movement has sympathised with the victims of the terrorist attack on a Jewish synagogue in Pittsburgh, US.

The group, which fights for the liberation of Palestinians, condemned Saturday’s deadly attack, which saw 11 people killed and 6 injured.

In a statement posted on the group’s website on Sunday, a member of the International Relations Bureau, Basim Naim stated:

“we are sorry to hear about the terror attack. As Palestinians and victims of the terror of Israeli occupation, we know the meaning of terror and its horrific outcomes.

“This heinous attack, especially in a place of worship, proves that terror has no religion or nationality.” 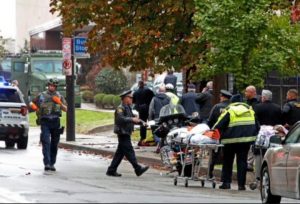 The shooter who stormed a synagogue in Pittsburgh during a baby-naming ceremony and gunned down 11 people on Saturday, reportedly told police that Jews were carrying out a genocide against “his people” and that he wanted them all to die, a charging document revealed on Sunday.

The suspect — identified as a 46-year-old Robert Bowers — reportedly yelled “all Jews must die” as he sprayed bullets into the Tree of Life synagogue during Sabbath services on Saturday before exchanging fire with police, in an attack that also wounded six people.