What comes to your mind after seeing the Channels TV online headline “Gaza rockets hit Israel”, accompanied with a featured image of damaged properties? 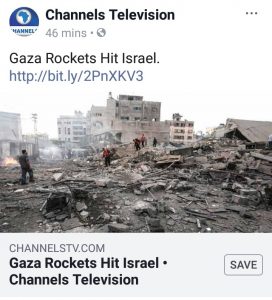 “The rubble of the damaged buildings in Israel after the rocket attacks from Gaza last night”, one would think, especially those who merely read headline(s) without going further to read the bodies of the news stories.

But that wasn’t the case! Reading through the full story revealed that the damaged properties were actually from a reprisal attack carried out by Israeli fighter jets, helicopters and drones, which “hit 80 targets in Gaza” early Saturday morning.

So, why did Channels TV use a wrong and misleading image to illustrate the news, with the headline: “Gaza rockets hit Israel”? Why didn’t the station use the image of the affected areas in Israel hit by Gaza rockets?

The answer is not far-fetched! The rockets did not hit anywhere in Israel! 10 of 16 rockets were intercepted by Israel’s Iron Dome rocket defence system. There were no casualties, except that “seven civilians were being treated for shock” as reported by Channels TV, which quoted AFP. 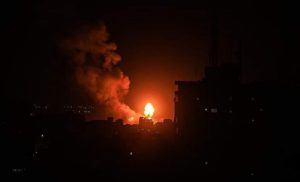 Sadly, a group known as Palestinian Islamic Jihad claimed responsibility for the intercepted rockets, but Israel immediately blamed Hamas and before one could say Jack Robinson, heavy bombers had landed on Gaza and destroyed properties, which was later used as featured image by Channels TV for its pro-Israel story.

It is also interesting to note that the Islamic Jihad group didn’t just fire rockets into Israel. Its action was a reaction to the murder of 5 and injuring of 230 Palestinian protesters earlier yesterday, Friday, by Israel’s soldiers/snipers at the border between Israel and Gaza.

Since the protests, otherwise known as the “Great March of Return” began on March 30, Israeli soldiers and snipers have killed at least 210 Palestinians and wounded more than 18,000.

However, the Israeli killing sprees were underreported by Channels TV and other pro-Israel media. Yesterday’s killings of protesters in particular was conspicuously missing on Channels TV as a separate news, but when the Palestinian fighters fired rockets into Israel, it became news which spread like wildfire. 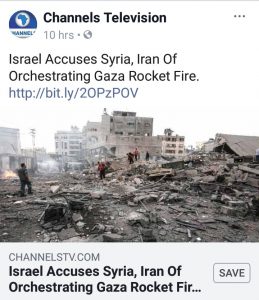 I do not in any way support violence. I have always supported the two-state solution, where both Palestinians and Israelis live side-by-side in peace. But I can authoritatively say that Israel has always breached the peace efforts in the region with unflinching support from US and western media, including the uninformed Nigerian media who only do cut-and-paste.

The State of Israel is famous for its violations of all UN resolutions since its forceful creation on Palestinian land in 1948. The continuous illegal settlements in the West Bank and the use of aggressive methods against peaceful protesters in Gaza are few instances of Israel’s lawlessness.

Yet, many of these atrocities were either unreported or twisted in favour of Israel by the pro-Israel media, including Channels TV, whose reason might be commercial.

Despite international condemnations, including from the International Federation of Journalists (IFJ), Israel’s use of excessive force and lethal weapons against protesters and journalists have continued unabated. Israel has always got away with these crimes, but she will never know peace until justice is established.