When Samuel Ortom, the Christian Governor of Benue State named another brother-in-Christ, Benson Abounu as his running mate for the 2019 gubernatorial election, there was no uproar from Nigerians over their religion (Christianity).

The headline of The Punch, October 17, 2018 was lenient with the embattled Governor, whose supporters had likened to Jesus Christ for accepting to die for the Benue people, as indicated on inscriptions on his campaign bus.

“Ortom picks running mate, says he’ll respect power separation” was the simple and straight forward headline used by the newspaper, with another quote attributed to Ortom, who promised to respect the separation of powers.

See the image below. 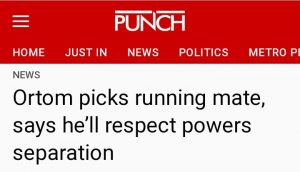 There are similar cases in other states, including Ekiti, where the just sworn-in Governor, John Olukayode Fayemi (also a Christian) ignored the calls for a Muslim running mate, and nominated a Christian as his running mate.

In fact, The Punch’s headline of May 31, 2018 quoted a chieftain of the ruling APC, Opeyemi Bamidele, who hailed the appointment of Chief Bisi Egbeyemi as Fayemi’s running mate.

See the image below: 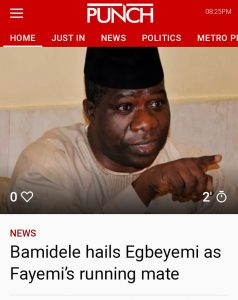 What did the Muslims do? They strongly and peacefully expressed their dissatisfaction over what they tagged “the continuous marginalisation of Muslims in Ekiti State”, but what happened after that? Nothing! Just the social media outcry, and that was the end.

The next news we heard was that the same Ekiti Muslims opened the doors of their Central Mosque for Governor Fayemi to observe Solatul Jumat (Friday Prayer Service) with them, a similar gimmick used by the former Governor Ayodele Fayose (again, a Christian) during his eight years in office.

Governor Fayemi quickly rushed to his Twitter handle on Friday, October 19 to break the news, saying he performed a “Jumat Thanksgiving Service” at Ado Ekiti with “my Muslim brothers and sisters”. 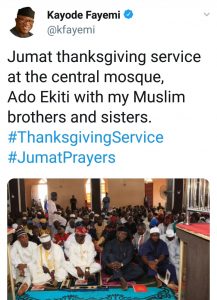 Suddenly, the evidently marginalized Muslims of Ekiti became the marginalizing Governor’s “brothers and sisters”, despite the fact that there was no single Muslim among his first three appointees – the Secretary to the State Government, the Chief of Staff and the Chief Press Secretary.

Heaven did not fall, because Yoruba Muslims are reputed to be the most tolerant set of people in Nigeria. The media did not go gaga on the religion of Fayemi’s running mate, and the first three appointments he made as Governor, in a state where the Muslim population is arguably between 35-40%. 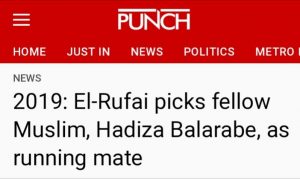 The newspaper, which had hitherto hidden the religious identities of Ortom’s and Fayemi’s running mates, mischievously used “fellow Muslim” to describe El-Rufai’s running mate, in a clear bid to incite the good people of Kaduna State against the Governor on the choice of Dr Hadizah, which they claimed would fuel the violent clashes between Muslims and Christians in Kaduna.

The media and other El-Rufai critics conveniently forgot that Plateau and Benue States – with Christian/Christian tickets – have been in turmoil for the same reasons in the last couple of years. Hence, if it is wrong for El-Rufai to field a Muslim/Muslim ticket, then it is equally blameworthy for Simon Lalong and Ortom to field Christians as running mates.

As if that is not enough, another medium, ThisDay newspaper, came with a more damning, inciting and screaming headline: “El-Rufai Dares Southern Kaduna Christians, Picks Muslim Woman as Running Mate”, as republished on its website. 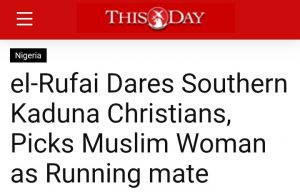 This same ThisDay, five months ago, did not give Fayemi the El-Rufai treatment. In fact, the religion (Christianity) of Bisi Egbeyemi was conspicuously missing in its headline as seen here: “Ekiti 2018: Fayemi Picks Former Commissioner, Egbeyemi as Deputy”. 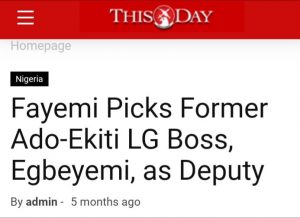 One wonders why the same ThisDay refused to be interested in the rich credentials of El-Rufai’s running mate, but decided to go for the jugular of Nigeria’s security and its citizens’ safety by featuring a treasonable and conflict-prone headline.

But, is Hadizah even a Muslim? There is no clear evidence of that from the intimidating profile of hers released to the press by Mr Samuel Aruwan, Governor El-Rufai’s spokesman.

The Punch, ThisDay and other media only deduced their assumed “Christianity” from her name, while being totally ignorant of the fact that there are many bearers of such names in Southern Kaduna and the northern states who are actually Christians.

There are also reports that Hadizah is neither a Fulani nor a Hausa woman. Hadizah is rather a Numaya Christian from Gwantu town, a 100% Christian community in Sanga Local Government Area in Kaduna state.

Is it not funny how the above fact, which is virtually everywhere, escaped the celebrated and acclaimed “investigative reporting department” of The Punch, ThisDay and other frivolous media?

While it is essential for the Kaduna State Government to clear the air on the religious affiliation of Hadiza Balarabe to douse the needless tension the terror-triggering reports have generated on the cyber space, it is also important for journalists to leave out what is doubtful, just as they must refrain from reporting outright lies deliberately.

In straight news stories, for instance, the job of journalists is to report recent events judged to be newsworthy the way they are, without the writer’s opinions or false impressions capable of promoting hatred or religious division among members of the community. 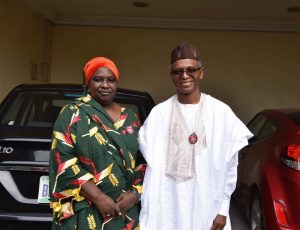 Hence, it would have been more accurate for The Punch, ThisDay and other media who mischievously incited the public with the “Muslim/Muslim ticket” rhetoric to have said: “El-Rufai picks running mate…”, similar to the manners they reported the Plateau and Benue stories, or better still, “El-Rufai picks woman as running mate”, as earlier published on Friday by The Punch online before the Saturday Editor painted the story with a religious coloration. 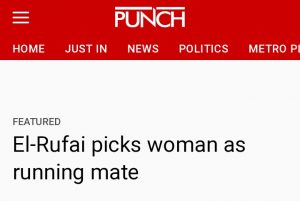 Interestingly, the female angle is in itself very newsworthy and positive, since such male-female pairing is very rare in the Northern States. This is only the second time a female would be chosen to run as Deputy Governor in the 51-year history of Kaduna State and as indicated in the press release, it was part of Governor El-Rufai’s “deliberate policy on promoting women, their causes and their involvement in politics”.

But whose interests are these rogue media pushing. Are they interested in fuelling religious and ethnic crisis? Are they really interested in a peaceful Nigeria? Do they realise they are also citizens of Nigeria? If I may ask, are these media not justifying the suspicions and allegations that they are doing the bidding of the destructive opposition and enemies of the Nigerian nation?

Irrespective of their interests, The Punch, ThisDay and other mischievous media should realise they are free to investigate El-Rufai’s claims and the religion of Dr Balarabe if they truly care. They could go beyond mere news reportage via news analyses, features, columns or editorials, which reflect their official opinions about the issue and the events that surround it.

– Rasheed Abubakar is a journalist and the author of “Hijab and the Nigerian Press” | Twitter @rawshieldpr | Email: rawshield123@gmail.com