The Principal of the International School, Ibadan, Mrs Phebean Olowe today, Monday shut down the school and ordered all students to go home after locking out, for the fourth consecutive school day, Muslim female students of the school who arrived for classes today in their Hijabs.

Muslim News correspondent gathered that when the Hijab-clad students reported for classes today, the principal proceeded to lock them out of the school premises as usual.

A while after, members of the Coalition of Oyo State Muslims, who had already pre-informed the Department of State Security (DSS) and other security agencies in Oyo State of their pre-planned protest at the ISI gate today, arrived for a peaceful protest in front of the school premises. 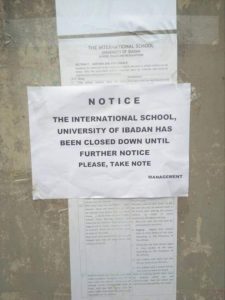 The moment Principal Olowe caught a whiff of the peaceful protest going on at the school gate, she hurriedly released and pasted an unsigned and undated “circular” indicating that the school has been shut down until further notice, and she hurriedly sent all students of the school, who had already settled down for classes, out of the school premises.

Mrs Olowe made this hasty decision without recourse to the safety and security of the students, who were absolutely safe within the school premises, but some of whom may be too young to find their way home on their own, especially as their parents were not pre-informed about the drastic, hurriedly made decision.

Meanwhile, Muslim News correspondent on the ground reports that the peaceful protest of the Oyo State Muslim coalition proceeded and ended peacefully without any violence, and its members have since proceeded out of the University of Ibadan premises to major media organizations within the Ibadan metropolis, as previously stated in their open letter.