Sequel to the “jailing” in the school library and subsequent locking out of the school premises of 11 Muslim students of the International School , Ibadan who have chosen to adorn the Hijab, the Coalition of Oyo State Muslims today, Monday, staged a peaceful rally at the ISI gate to demand for their wards’ rights to use the Hijab.

Led by the Secretary General of the Muslim Community of Oyo State (MUCOYS), Sheikh Ismail Busayri, the protesters demanded, among others, that all willing Muslims female students of ISI should be allowed to use the Hijab, and all attempts at intimidation, harassment and forceful coercion by the ISI Principal, Mrs Phebean Olowe, must stop forthwith. 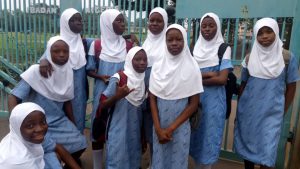 Sheikh Busayri stated several legal and historical precedents that support Hijab use in schools, including the recent Firdaus Amasa Hijab victory at the Nigerian Law School, the recent Lagos State Government approval of Hijab use in its public schools and the 7-year old approval by then Governor Fayemi of Hijab use in Ekiti schools, without a protest or legal pressure, despite Muslims being in the minority in Ekiti state.

According to an earlier letter written by the coalition to the DSS and published online, the pro-Hijab rally will proceed from the ISI gate to major media organisations in the Ibadan metropolis.