On Sunday, December 23, 2018, The Nation newspaper announced Leah Sharibu as its Person of the Year and placed Imam Abdullahi Abubakar in the first runner-up position. The pictures of the duo with three other finalists made the front page of the its Sunday edition.

The Chairman of The Nation’s Editorial Board, Sam Omatseye was probably unconvinced with the decision of the Board, which is peopled by erudite professionals, on the choice of Leah as the Person of the Year. Guess what he did?

Immediately afterwards, social media (especially WhatsApp) was agog with the news that Imam Abdullahi was the The Nation’s Person of the Year, with many pundits and readers not knowing that the newspaper had picked Leah, “for demonstrating the ultimate moral of resistance against RELIGION AS A WEAPON OF EVIL…” quoting the newspaper.

The differences in the choice of personalities celebrated by the newspaper and its editorial board chairman did not bother me. After all, the medium I represent (Muslim News newspaper) also honoured Imam Abdullahi alongside Saifura Ahmed and Hauwa Liman, the two Hijabi-Muslim health workers who were also abducted by the same terrorist group in March 2018, barely a month after the Dapchi school girls’ abduction in February 19.

I am particularly perturbed about The Nation‘s bias against Islam and Muslims in its report, which I found very offensive and at the same time debasing of the pedigree the newspaper has built over the years. 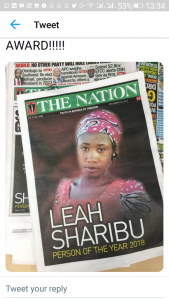 The newspaper’s style of analysing Islamic issues in recent times has been subjective. Majority of the editorial board members, with their pedigrees, chose not to hide their hatred for Islam in their columns. Alas! They threw ethics to the winds to paint Muslims bad except for few – like Sam Omatseye, whose recent article titled: “The Hijabists” was commended by the Nigerian Muslims for addressing the age-long hijab crisis in ISI, Ibadan, objectivity.

To now address the real issue, the special edition of The Nation’s Person of the year, titled “LEAH SHARIBU: PERSON OF THE YEAR 2018: Gripping heroism”, The Nation wrote, in part: “Leah, 15, was among 110 schoolgirls kidnapped by Boko Haram terrorists from the Government Girls Science and Technical College (GGGSTC), Dapchi, Yobe State. The jolting mass kidnapping happened on February 19.

“Sadly, five of the kidnapped girls reportedly died in captivity. Others abducted with Leah were set free on March 21. Those released were Muslims. The only Christian among them, Leah, was not released because she refused to renounce her faith and convert to Islam”.

The part where the newspaper wrote: “those released were Muslims and the only Christian among them, Leah was not released….” was deliberately framed to denigrate Islam and paint Muslims bad. However, The Nation forgot or pretended as if it didn’t know that the five girls who died in Boko Haram captivity were Muslims. Sadly, it went silent on the religion (Islam) of the five to promote and celebrate its heroine, Leah, a Christian, who was described as “a symbol of religious freedom”. 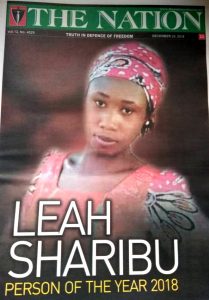 One wonders to know The Nation’s newspaper criteria of judgment when Saifura Ahmed and Hauwa Liman, two Muslim health workers with the Red Cross paid the supreme price for no other offense than sacrificing to safe other people’s lives in Boko Haram invested areas. It is worthy of note that the third captive, Alice Loksha, a Christian lady was spared. So whose interest is Boko Haram serving, if we may ask?

Unfortunately, The Nation and other media, for instance, The Guardian, who also named Leah as its Person of the Year, for “her continued detention by the Boko Haram insurgents as a result of her defiance of compromise and refusal to renounce her faith…” blew Leah’s conversion story out of proportion from the very first day to tarnish the beautiful image of Islam, knowing full well that there is no compulsion in religion (as established in the Qur’an 2: 256). 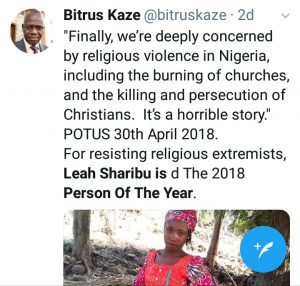 Despite the constant denial of the Nigerian Muslim community of the deviant group and its activities which are antitetical to Islam, it is appalling to read that The Nation still addresses Boko Haram as “Islamic fundamentalist” group, as seen in the same report. The truth however is, there is nothing Islamic about Boko Haram. Not even the term “Islamic terrorist group” as being used by other western media is correct. They are all propaganda!

Going by the several narratives from different verified sources, it is evident that Leah Sharibu’s continuous incarceration in Boko Haram’s den goes beyond the conversion story the media has fed us with for months. As a matter of fact, it is a booming business and according to the news published by virtually all the Nigerian media, including The Nation in October 2018, the terrorist group is demanding a hefty ransom to free Leah, who still remains a Christian as of today.

As narrated earlier, in order to send a strong message to the world that Boko Haram means business, the group gruesomely murdered two Hijabi-Muslim health workers (Saifura Ahmed and Hauwa Liman) between September and October, 2018, because the Federal Government or their employers failed to pay their ransom.

Like Leah, it is pathetic to hear that this group of brainwashed youths spared the life of the third health worker, Alice Loksha, who is still a Christian till this moment.

To The Nation, the question is: Why does a group that claims to be preach pristine Islam habitually kill Muslims who are supposed to be protected, while sparing the lives of Christians?

No doubt, Leah and other abducted Chibok and Dapchi girls, as well as the health workers fought a good battle against Boko Haram, the enemy of Islam and humanity. They all deserve to be honoured by all humans – irrespective of their religious and ethnic affiliations. Unfortunately, there is the possibility that those in captivity can still regain their freedom, but, of course, the dead Muslims can’t, as they have returned to their Lord as martyrs.

It is therefore partinent for The Nation newspaper to be mindful of its orchestrated negative portrayal of Islam and the Muslims. It is also essential for the unbiased and objective minds to urgently come to its rescue from the agents of the unethical journalism, before it faces the attendant backlash of boycott and credibility crisis that is sure to ensue should the show of shame continues.

– Rasheed Abubakar is the Publisher/Editor-in-Chief, Muslim News Nigeria. He is also the author of “Media Narratives of Muslims in Nigeria: Facts and Fallacies | Email: rawshield123@gmail.com | Twitter: @rawshieldpr.