…To be buried on Sunday in Minna, Niger State

Nigerian Muslims from all works of life have continued to expressed their grief over the passing of the foremost educationist, author of many Islamic Studies books and founder of Federation of Muslim Women Associations in Nigeria, FOMWAN, Aisha Lemu, who died at the age of 79.

Aisha, who married Sheikh Ahmed Lemu, the former Grand Qadi of the Sharia Court of Appeal of the State of Niger in 1976, died today (January 5) in Minna, Lagos.

The contribution of Hajia Aisha Lemu to Islam is very outstanding. I read some of the books she wrote for my O Level Islamic Studies Examination.
May Allah (SWT) in His infinite mercy forgive her shortcomings and grant Her Aljanna Firdaus. – Musa Ibrahim 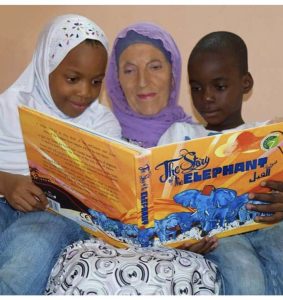 We commiserate with the Lemu Family on the death of the renown Islamic Icon Aisha Lemu. May Allah grant her eternal bliss in Jannatul Firdaws. (Aamin) – Saheed Ashafa

Indeed, our hearts are heavy, and our eyes are moist, but we take solace in the immeasurable contributions and good legacies she has left behind. May Allah pardon Hajiyah Aisha Bridget Lemu of her shortcomings, widen and illuminate her grave, lighten her accountability, and accept her into the highest station in Jannah. – Halimah Oladamade Ahmad

Aisha lemu founder of Association of Model Islamic Schools, FOMWAN & one of the 3 founders of IET, Nigeria has returned back to Allah today. May Allah have mercy on her & bless the legacies she left behind. Its good to be concern on the legacies we hope to also leave. – Dr Bashir Yankuzo

Aisha Lemu is probably the most underrated Islamic thinker in Nigeria in the past 50 years. Her work with her husband at the Islamic Education Trust has more or less defined “Islamic studies” in many public and private schools in Nigeria since the 70s. May she rest in peace. – Oyesanya Sodiq

Aisha Lemu was a Shero. An Islamic and academic Icon. I’m deeply saddened by her death. Your impact will remain with us forever Grangran. May Allah grant you the highest ranks of Janna ❤️ #AishaLemu – Muneeeah Umar

We will never forget Brigette Aisha Lemu, an incredible person that taught us so many values… she was my mother’s principal in sokoto and decades later became my proprietress in Minna.. May her soul rest in perfect peace, Allah ya sa ta huta. Amin – Zayyad Bawa Ibrahim

Aisha Lemu’s books were some of the most informative Islamic text during the early teenage years I loved reading over and over. They were so rich and enriching. May Allah reward her. – Abdullahi Buhari

Lemu was born in Poole, Dorset, in 1940, as Bridget Aisha Honey. At the age of thirteen, she began to question her faith and began exploring other religions including Hinduism and Chinese Buddhism.

She studied at the University of London’s School of Oriental and African Studies (SOAS), pursuing her interest in Chinese history, language and culture. While there, she met Muslims who gave her Islamic literature to read and she converted to Islam at the Islamic Cultural Centre in 1961, during her first year of study.

She subsequently helped to found the Islamic Society at SOAS, becoming its first secretary, and also assisted in the formation of the Federation of Student Islamic Societies.

After graduating from SOAS, Lemu studied for a postgraduate qualification to teach English as a foreign language and while doing so, she met her future husband, Sheikh Ahmed Lemu, who had been studying at another college of the University of London and was involved in the Islamic activities around the institution.

Having obtained her Postgraduate Certificate in Education, she moved to Kano in Nigeria in August 1966 to teach at the School for Arabic Studies there, where Sheikh Ahmed Lemu worked as headmaster.

They married in April 1968, with Aisha becoming his second wife. She subsequently moved to Sokoto to take up the position of principal of the Government Girls College.

Sheikh Ahmed Lemu was Grand Qadi of the Sharia Court of Appeal of the State of Niger when it was founded in 1976, and Aisha was principal of the Women’s Teachers College in Minna from then until 1978.

The couple founded the Islamic Education Trust, which now operates in several Nigerian states has offices and a library, includes a publisher, primary and secondary school and adult education centre for women.

Lemu was a member of the Islamic Studies Panel, set up by the Nigerian Educational Research Council, which was to revise the national Islamic curriculum for different school levels.

In 1985, Lemu founded the Federation of Muslim Women’s Associations in Nigeria (FOMWAN) with other Muslim women and was elected as its first national Amirah for four years. Lemu served as a civil servant after this term of office.