“It feels great. I am finally achieving a dream I had since I was 10 years old.”

A former Amirah of MSSN UNILAG, Hajiah Ganiyat Tijani-Adenle has bagged a Doctor of Philosophy (PhD) in Mass Communication from the Department of Media and Communication, Faculty of Technology of the prestigious De Montfort University, Leicester, in far away United Kingdom.

Hajiah Tijani-Adenle broke the good news via WhatsApp platform on Thursday, January 17, saying: “I am happy to inform the house that I just passed my PhD Viva. I am now Dr. Ganiyat Tijani-Adenle.”

Muslim News’ findings revealed that the former (2005) MSSN UNILAG Amirah, who is also a Lecturer at the Lagos State University (LASU) defended her thesis , titled: “Women in Nigerian News Media: Status, Experiences and Structures” before erudite scholars and panelists led by the Viva Chair, Prof. Justin Smith, a Professor of Media and Communication at De Montfort University.

The thesis, we reliably gathered, investigated women journalists’ experiences of journalism practice in Nigeria and examined the structures that moderate those experiences.

Hajia Tijani-Adenle, while embarking on the project, interviewed 46 female and male journalists holding top editorial positions and observed women journalists’ interactions with their male colleagues in the newsrooms of two news media organisations for four weeks.

She also reviewed the employment policies of five news media organisations in Nigeria. 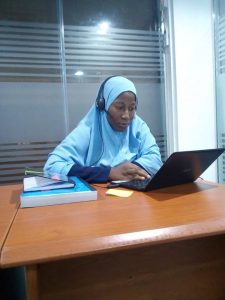 In an exclusive interview with Muslim News, the Director, Governance of the Al-Mu’minaat Social Advocacy Project (SAP) said: “It feels great. I am finally achieving a dream I had since I was 10 years old.”

She dedicated her success to every Muslim girl currently being denied their rights due to bigotry, hate and religious extremism.

READ ALSO...  Why Hon. AbdulHakeem Abdul-Lateef deserves to win the Lagos Man of the Year 2018 Award

“As a feminist and gender scholar, I appreciate the impact of disenfranchising young Muslim girls from getting education and preventing Muslim women professionals from contributing to the development of Nigeria due to ethnocentrism and hate.

“Nigeria will never fully develop if a large percentage of its women are disenfranchised”, she stated.

Her external examiner was Dr Deborah Gabriel, who works at Bournemouth University. Dr Gabriel’s PhD was on black female bloggers in the UK, and she is the head of Black British Academics, a UK network. Her expertise is on women and race, and she is a former journalist.

Hajiah Adenle studied Mass Communication at the University of Lagos (UNILAG) and graduated in 2005 with a Second Class Upper. She bagged her Masters in the same department in 2009 before embarking on the PhD.

She worked as a news editor and news programs producer at Voice of Nigeria between 2007 and 2009.

Hajiah Adenle, a dutiful wife and lovely mother of three was the best APCON Graduating Student in 2007 and won the Commonwealth Broadcasters Association (CBA) Broadcasters Travel Bursary in 2008.