There was widespread jubilation among the members of the Muslim Students’ Society of Nigeria (MSSN) in Lagos State last week, Thursday, January 17, when the news broke that their former Amir, Alhaji Moshood Bello had successfully defended his doctoral thesis Viva.

The jubilations were not limited to the Muslim students body, as members of the Guild of Muslim Professionals (GMP) for Peace and Development also congratulated and showered encomiums on the new PhD graduand, who was instrumental to the establishment of the GMP, Nigeria’s leading Islamic professional body six years ago.

The news of Alhaji Bello’s Doctorate Degree in Management from the prestigious Keele University, United Kingdom (UK) came at the same time with Hajia Ganiyat Adenle-Tijani’s, the 2005 Amirah of MSSN UNILAG Branch, who bagged a Doctor of Philosophy (PhD) in Mass Communication from De Montfort University, Leicester, also in the UK.

In an exclusive chat with Muslim News today, Alhaji Bello, who is also a former Amir of MSSN UNILAG (1996/97) glorified Allah for helping him complete the three-year journey in far away UK. Despite the challenges, he said he was happy that he eventually saw the proverbial light at the end of the tunnel.

“It is one of Allah’s favours and I’m extremely grateful to Him. I also thank my wonderful and lovely wife, Hajiyah Hafsat Bello for her understanding, love, patience and sacrifice throughout the duration of the programme. And all my friends and brothers for their support (in different forms) and prayers”, he stated. 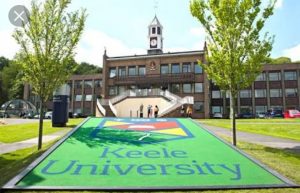 Bello, who equally served as the Amir of the Society at the B-Zone, dedicated his academic achievement to his late parents, whom he said would have been extremely happy if they were to be alive.

According to him, “there is no doubt in my mind that no human being (dead or alive) deserves this honour more than my late parents. How I wish they were alive today to witness the realisation of one of their many dreams forty one years ago when they enrolled me at Talim Islam Ahmadiyyah Primary School.

“If it were possible for them to see today from where they are, I am very sure they would be extremely happy to see that their small boy is now a Doctor of Philosophy. May Allah make Janatul Firdaus their eternal abode (Ameen).”

Alhaji Bello defended his research project, entitled “An Exploration of Relationships between Entrepreneurial Opportunity Formation Process and Performance of Nigeria’s Small and Medium Enterprises (SMEs)” before erudite scholars led by Qihai Huang, a Professor of Entrepreneurship and Management from the same University and Professor Paul Jones, both being internal and external examiners respectively.

Prof Jones, a Professor of Entrepreneurship and Innovation at Swansea University, has supervised ten doctoral students to completion and examined 28 students in Europe, Africa and Australia.

The thesis, supervised by Professor Kurt Allman, the Director of the Keele Management School, unraveled the potential relationship between opportunities formation processes and firm performance which earlier studies have ignored.

The research project, Muslim News findings revealed, has contributed to the debate on the nature of entrepreneurial opportunities and provided additional evidence as to why the SME failure rate is high in Nigeria.

He said: “Meeting people, especially Muslims from other cultures was wonderful. The UK is one of the most culturally diverse societies around. Meeting and interacting with other cultures was one huge experience I can’t trade for anything. One would appreciate some of the values we have as Muslims in Nigeria, when you see other people lacking them.

“You would appreciate the values of other cultures that you were not privileged to know before. Practical demonstrations of brotherhood from brothers from other countries have now enriched my wider understanding of that concept”, he stated.

Dr Bello enthused that he would love for his and others’ PhD achievements to serve as motivations to other MSSN members, and indeed all Muslim youths.

The latest PhD holder, Dr Bello had also been the Amir of MSSN, Somolu Area Council and Secretary General, MSSN, National Headquarters at different times. He is currently a member of the Board of Trustees (BOT) of the Guild of Muslim Professionals (GMP).

Dr Bello obtained a HND in Business Management from the Lagos State Polytechnic (between 1992 and 1994), where he is currently a Senior Lecturer for undergraduate and post-graduate programmes.

He is the founder of Alphabell Consulting and co-founder of McDam Consulting Limited – both management consulting firms providing comprehensive support to leading organisations and startup businesses in Nigeria.

When next you see Alhaji Bello, simply address him as Dr Bello.

We at Muslim News congratulate and pray Allah to bless Dr Moshood Bello and Dr Ganiyat Tijani-Adenle on their new feats, just as we wish those still in the process speedy completion.