The controversial picture of Kadaria at the salon

‘Implications of her tweets’ – Scholars

Ace broadcaster and host of #MeetTheCandidates, Kadaria Ahmed has come under attack for tweeting that she would not use the Hijab, a mandatory headgear for Muslim ladies who have reached the age of puberty.

The 51 year old broadcast journalist, who drilled President Buhari, Alhaji Atiku and the presidential candidates of some other political parties in the weeks leading to the presidential election told her critics to perfect their faith before focusing on others.

Trouble started when the former BBC London-trained journalist tweeted over the weekend, a picture of herself at the salon, with the caption;

“Today, I took a big risk.
Started noticing my hair is greying. I am that age so it wasnt much of a surprise. However, I soon realised I don’t like the ‘mixed’ look. Neither, grey nor black but I also hated using black dye. So I resolved to experiment by hurrying things along.

However, one of her followers, Awwal Bashir replied the tweet, saying, “Alhamdullilah. The Sunnah (the way of the Prophet) is to cover your hair and entire body.”

Probably not comfortable with his response, Kadaria fired back, “It is also a greater Jihad to perfect your own faith before focusing on others.”

Another Nigerian tweep, Samaila Ibrahim, intervened, saying, “But I don’t think you know him, to know whether he needs to perfect his own faith.”

Kadaria replied him, “I know he is human and so he is not perfect and so both you and him need to focus on becoming perfect Muslims. Once that happens pls come back and I promise I will listen until then pls go away.”

Samaila replied with another tweet, sending it with a smiley emoji, “Truth is bitter. Why promise to listen when we have become ‘perfect’ Muslim?” 😀

This tweet by Samaila forced Kadaria to emphasise that she will not use the Hijab. According to her, “You are the bitter one. So obsessed with shoving your version of Islam down my throat you stay on my timeline, where you are not wanted. I WILL NOT COVER MY HAIR . Hope that is clear enough and now clear my timeline”. 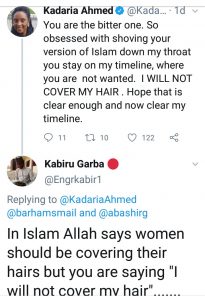 Kabiru Garba with the Twitter handle @EngrKabir1 quickly reminded Kadaria, saying, “In Islam, Allah says women should be covering their hairs but you are saying ‘I will not cover my hair.'”

Buttressing Kabiru’s point, another tweep, Muhammad Rayyan, quickly stated the position of Islam on the Hijab, with a quote from the Noble Qur’an.

Allah says (interpretation of the meaning), “O Prophet! Tell your wives and your daughters and the women of the believers to draw their cloaks (veils) all over their bodies (i.e. screen themselves completely except the eyes or one eye to see the way).” [Al-Ahzaab 33:59]

Also disappointed by Kadaria’s tweets, @ElameenAbdul tweeted;” So, just coz someone reminds u of a command from commandments of Allah u pick a fight, Subhãnallah. Allah ya shirye mu. So remind, if the reminder should benefit.” Qur’an 87:9

Also, AbdulRaheem Wasiu said: “Perfect faith or otherwise. The most important thing is that every Muslim must save his or her fellow Muslim from hell by calling them to good and prohibiting them from sins.

Some however faulted the manners of correcting Kadaria by the tweeps. @Khaozar7 tweeted, “The hiqmah here is that, we should all learn the etiquette of correction in the deen and that is d point Madam (my potential in-law 😀), is trying to point out here, my humble opinion. 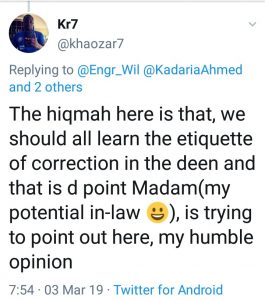 Northerner @ReallyWasco said, “You responded well to them bcos of ur huge experience & knowledge in journalism, but they’re right even though they can do it in different way…May God forgive us all..”

In his reaction, a veteran journalist with the Voice of Nigeria (VON), Mal. Tajudeen AbdusSalam said Kadaria went too far by over-reacting over a simple reminder of Allah’s injunction, the Qur’anic solution to a simple problem and the challenge of managing her emerging grey hair.

“No one is beyond admonition and the admonisher need not be a perfect human being, be it in religious, social or other spheres. After all, they only convey Allah’s message, not theirs.

Except if Kadaria is indirectly saying,”I don’t want to be advised or I’m bigger than your admonition and my celebrity status has elevated me beyond seeking divine solutions to my problem”, he stressed.

Mal. Tajudeen noted that in situations like that, Kadaria should have chosen to ignore the advice instead of attacking the giver of an innocuous/harmless admonition.

According to him, Kadaria has been blessed by Allah and should rather be grateful to Him instead of resisting His command.

“Silence is golden in this situation. She must resist the untoward British or Western influence, her resentment for Islamic ethics or the abuse of the Hijab by some people. Doing that will unwittingly make her tow a wrong path.

“She must realise she has inadvertently become a celebrity and a lot of younger ladies out there will naturally be influenced by her disposition and stance on issues”, he added.

While the altercation continues on Twitter, Muslim News in-house scholar, Ustadh Ibn Taofeeq AbdulAzeez clears the air on the matter:

The Nigerian-born Middle East scholar said the Twitter user (Bashir) who called Kadaria’s attention to the Sunnah of Hijab has not gone to the extreme, stressing that the famous journalist should have ignored him or deleted his comment if she did not agree with such.

Ustadh Ibn Taofeeq said the belief that Bashir and other tweeps who
offered soft and intellectual admonition to Kadaria should have minded their business does not apply in this situation.

He said, “No, No, No… The idea does not in anyway apply to this situation. Why do we say this? We say this because enjoining what is good and forbidding what is evil/bad is one of the greatest principles of Islam. Some scholars even regard it as a pillar of Islam. What every Muslim must do is enjoin what is good and forbid what is evil as established in Qur’an 3: 104, 110.

“If none of all those who saw the evil tweet debunked it and forbid the evil, they will all be sinners. From their reactions, there were no signs that she was insulted. There were also no provocative or unguarded utterances from their observations. They were soft and intellectual reminders. This is what Islam preaches. Manners of correcting people’s mistakes is very important for every caller to Islam,” he stated.

The revered scholar said the Hijab is mandatory as stated in Surah Nur (Chapter 24) and Ahzab (Chapter 33) of the Qur’an, adding that it is strange indeed that a Muslim woman whose character is good, and who prays and fasts and does not fornicate, and avoids gossip and backbiting, does not wear the Hijab.

“If a person really achieves these righteous deeds, this is a strong indication that she loves goodness and hates evil. It seems that there is much goodness in this Muslim woman, and she is close to the path of righteousness. So she should strive to wear the Hijab as her Lord has commanded her.”