DEAD BUT ALIVE: The gripping story of 50 victims of the NZ terror attacks

Some of the 50 Muslim worshippers who lost their lives during last Friday’s Christchurch attacks in New Zealand might have been buried in accordance with Islamic rites, but Muslim News can authoritatively confirm that they are still alive.

Extensive research carried out by Muslim News revealed that those killed while worshipping Allah in the two mosques – Al-Noor and Linwood in New Zealand – and those who fought and died in the cause of Allah are martyrs who are alive with their Lord in Jannah (Paradise).

Explaining the meaning of “they are alive”, Muslim News resident scholar, Ustadh Ibn Taofeeq AbdulAzeez said, “They might be dead in this worldly life, but they are alive with their Lord, Allah in Jannah. Thier souls are in the gardens of green birds. They will be blessed with Jannah, where they will eat and enjoy. They will be fully alive in bounties and provisions.” 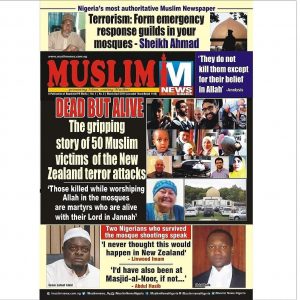 The Nigerian-born Middle East scholar argued that the life of the martyrs is unique and cannot be compared to the earthly life.

“This special type of life has been given to the victims of the Christchurch attacks on account of the great status of martyrdom and is known only to Allah,” he noted.

Quoting from a book titled: “Ahkaam Ash-shaheed fii l Fiqhi Al-Islaamiy – Rulings of Martyrdom in the Islamic Jurisprudence” by Sheikh Abdul Rahmaan bn Garmaan Bn Abdullah Al-Kareemiy Al-Umariyy, Ibn Taofeeq said that negation of death for the victims of the New Zealand attacks is ‘not literal’.

“In fact, death takes place. They were shot by a terrorist who invaded the mosques with dangerous weapons, but on account of the great status of the martyrs, Allah has said; ‘Think not of them as being dead…’ Qur’an 2: 154

Sheikh Muhammad Bn Saalih Al-Uthaimin as quoted by Ustadh Ibn Taofeeq also said; “they are alive with their Lord” could also mean “life of Al-Barzakh”, which was explained in Surah Aali Imran, Qur’an 3: 169, “…but you perceive (it) not” i.e., you do not perceive that they are living, because it is the life of Al-Barzakh in the unseen.”

Ibn Rajab Al-Hanbali(rahimahu Allahu) said, under the heading: ‘Chapter on the location of the souls of the dead in al-Barzakh’ :

“As for the martyrs, most of the scholars are of the view that they are in Paradise. There are many authentic sayings of the Prophet (SAW) confirming that. Some are stated below:

In Saheeh Muslim (1887), it is narrated that Masrooq said: “We asked ‘Abd-Allah ibn Mas’ood about this verse: ‘Think not of those as dead who are killed in the way of Allah . Nay, they are alive, with their Lord, and they have provision’ [Aal ‘Imraan 3:169].

He said: “We also asked about that, and he (the Prophet) said: “Their souls are in the midst of green birds, which have lamps hanging from the Throne, and they roam freely wherever they want in Paradise, then they return to those lamps…” 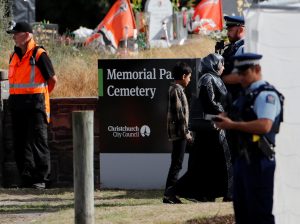 Imam Ahmad, Abu Dawood and Al-Haakim narrated from Sa’eed ibn Jubayr, that Ibn ‘Abbaas said: “The Messenger of Allah said: “When your brethren were slain at Uhud, your Lord put their souls in the midst of green birds that go to the rivers of Paradise and eat of its fruits, then they go back to lamps of gold that are hanging in the shade of the Throne.

“When they find their food and drink and abode they said: ‘Who will convey to our brethren that we are alive in Paradise and receiving provision, so that they will not give up fighting or turn away from Jihad?

“And Allah said: ‘I shall tell them about you. Then Allaah, may He be exalted, revealed the verse: ‘Think not of those as dead who are killed in the way of Allaah. Nay, they are alive, with their Lord, and they have provision’ [Aal ‘Imran 3:169].”

“A Heroic Son” | Hussain al-Umari, 35, died while challenging the gunman.

Every Friday, Hussain would pray at the mosque and then have dinner with his parents. It was his Friday routine. But no more.

He attacked the terrorist to save others, and lost his life. #50Lives

Ahmed Abdel-Ghany, 68, is one of the most recently identified victims of the #Christchurch massacre.

He’s a native of #Egypt, who migrated to #NewZealand with his son in 1996. He is survived by his son Omar, who said he, “was a kind man with the purest of hearts.”

Sohail Shahid was one of many Pakistanis killed in #Christchurch.

He was working in New Zealand temporally, far from family and loved ones. This image of his relative, pulling up a picture of his fallen cousin, says it all.

Sohail was 1 of #50Lives taken on Friday.

“The Newlyweds” | Abdul Nazer, 34, and his wife Ansi Alibava, 25, were inside the Al-Noor mosque on Friday

The young couple borrowed money to move to #Christchurch last year so Ansi could earn her degree. She was killed. Abdul is raising money to have her body sent back to India.

He was a very pious man, and originally hailed from Bangladesh. He leaves behind a wife, and two sons. His void will be missed in the community

– By Rasheed Abubakar with another information from Khaled Beyloud