Like New Zealand, Unlike Egypt: A Tale of Two Murderers

However, unlike New Zealand, where a self-acclaimed far-right terrorist, Brenton Tarrant killed 50 Muslims, it was a Muslim former army chief, Fatah Sisi that ordered his armies to massacre not less than 1000 Muslims who protested the unlawful ouster of Mohammed Morsi, Egypt’s first democratically elected president.

The Rabia massacre was described as the world’s biggest, bloodiest and most brutal massacre, which was carried out by Egyptian security forces in one day at Rabiah Al-Adawiyyah square in downtown Cairo, Egypt.

Unlike the Australian murderer who is currently facing the murder charge in New Zealand, the Egyptian murderer is not only ruling the country for the second term, he is now the Chairman of the African Union, while remaining an obedient puppet of Saudi Arabia and the US.

While a non-Muslim Prime Minister Jacinda Ardern stood by the Muslims of New Zealand over the horrific attacks during the mourning period, the Saudi-led Arab world watched unconcerned as thousands of Egyptian Muslims, including President Morsi, continue to languish in Sisi’s dungeons for close to six years. 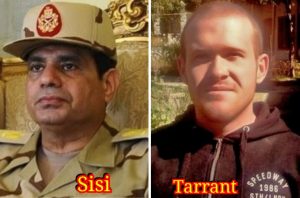 As we mourn the victims of the New Zealand mosque attacks, we should also remember the victims of the Rabia massacre, among whom were children, aged men and women. We should seek justice for them, call for the release of the thousands in prison, and demand for the prosecution of the murderer.

Having often visited New Zealand, the recent tragedy in Christchurch left me shocked and deeply saddened. The horrific incident highlights the importance and fragility of intra-faith harmony. If this can happen in a peaceful country like New Zealand, it can happen anywhere, especially in a multi-religious country like Singapore.

The emblem is my personal tribute, to express my sincere condolences for the bereaved and all who are grieved by this reprehensible incident. I hope to convey a message of unity that transcends languages and cultures — to stand in solidarity regardless of faith; and to never allow such acts of senseless violence, intolerance and bigotry divide us. 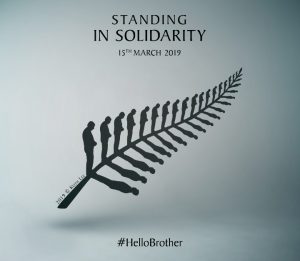 The silver fern has been widely accepted as an unofficial symbol of New Zealand’s national identity since the 1880s. The rows of men, standing in solidarity, are depicted as a silhouette deep in prayer and thought. They represent every one of us affected by the horrific incident, sombre & solemn. A row of men lies before them, seemingly their shadows, but also representative of the fallen victims. Both rows are connected at their soles (souls), with the same stem connecting all and forming the Silver Fern, the embodiment of unity, strength and resilience of New Zealand.

When words do not suffice, I hope my visual will narrate, and its message, resonate to foster compassion, understanding and tolerance in our diverse society.