‘Reminiscing a night at Raudah, the garden of paradise on earth

I was the last to visit the Raudah in the Prophet Muhammad’s mosque in Madinah among the 35 pilgrims that went for the April 2018 edition of Family/Kids Umrah with Hajj Mabrur, one of Nigeria’s leading Hajj and Umrah operators. This was due to my disability, which required someone to accompany me. I had almost given up on visiting the Raudah until Mr AbdulHamid Oyinlola, the Hajj Mabrur operations manager offered to go with me.

Earlier, I had heard my fellow pilgrims relish the joy of praying in the Raudah, the holy space/site between the Mimbar (the pulpit of the Prophet (SAW)) and his house (where he eventually breathed his last, in Aisha’s room) in the 1 million-capacity mosque. While some pilgrims backed out due to the mammoth crowd, the visit was a success story and a wonderful experience that will linger in the memories of those who struggled to pray inside the holy site.

Coincidentally, I had received many prayer requests via WhatsApp from family and friends back home in Nigeria, with some specifically saying I should make Dua (supplications) for them at the Raudah. I then realised the significance of the important site, and came to the conclusion that I would not leave Madinah without visiting the Raudah. At exactly 10:30pm (Saudi time), I made it to the Raudah, barely 24 hours before embarking on the journey from Madinah to Makkah for the Umrah proper.

Unlike thousands of other pilgrims who lined up in a long queue, I had a soft landing. I didn’t go through the crowd; there is a barrier created for people with disabilities. Although I don’t feel comfortable with the word “disability” or “special people” as often used for people who are physically challenged, I actually still have a minor deformity on my right lower limb. I do not see myself as a person with disability, but this is a reality I have come to accept. On this premise, I was granted permission to pray inside the famed Raudah with my guide (Mr Oyinlola).

The Raudah, which is 22 metres in length and 15 metres in width, can be accessed through the first gate, called Babus Salam, of the expansive Masjidi Nabawi. The entrance gate is painted green, differentiating it from the breath-taking architectural designs and paintings of the remaining parts of the mosque buildings. The Raudah is also known as Riyaad-ul-Jannah (the Garden of Paradise), based on an authentic narration in Sahih Bukhari where the Prophet (SAW) said: “Between my house and my pulpits lay a Garden from the Garden of Paradise, and my Pulpit is upon my Fountain (Al-Khaothar).”

There are different interpretations of this hadith by scholars, which could be found in Sahih Muslim, including, among others, that remembrance of Allah in this area brings the Rahmah (Blessings of Allah) in multitudes, and various forms of worship in this holy place makes the pilgrim a good candidate for Paradise. Imam Malik described it as a small garden of Paradise which will be transferred eventually to Paradise, and will not be destroyed like the rest of the earth during the events of the Last Day.

Going by these authentic narrations, it will be correct and appropriate to say I spent a night in Paradise, though on earth. Imagine you having an opportunity to be in Paradise for just a night, where you have a golden opportunity to make wishes which shall be granted sooner or later by Allah. And what do you think I did?

Without much ado, I observed two Rakaa’t of Nafil (supererogatory prayer). I prolonged my last Sujuud (prostration) and thanked Allah for giving me the opportunity to visit His House. Then I prayed for myself, families, friends, Daw’ah (Islamic propagation in Nigeria), the suffering Muslims across the world, and my dear country, Nigeria.

As I began to mention names on my prayer requests one after the other, the mosque’s security officer came to cut us short after noticing our prolonged presence. It was then that I realised why he took that decision. Many pilgrims, in their hundreds, were waiting, wanting to feel the fragrance of Paradise on earth. Despite the congestion and hurdles, some pilgrims were opportune to pray in the Raudah more than once. There were allocations of time to male and female visitors, but the time slots for females were quite brief (after Subh and after Ishai). As expected, many of the Hajj Mabrur female pilgrims, including the children, did not miss the blessings of the Raudah.

Thus, we left in a hurry, after saying tasleem to end the Nafil. We couldn’t take time to explore other wonders of the Raudah and its environs, but I sighted Prophet Muhammad’s Minbar while making tasleem to the right. The Minbar has a rich history, dating back to the time he (SAW) used to lean against the trunk of a palm tree during the Khutbah (sermon). One day, the Ansar (the Helpers of Islam) humbly suggested to him that; “If you approve, we can make a pulpit for you.”

The Prophet (SAW) approved their offer and a pulpit was made. Prophet Muhammad (peace be upon him) then sat on the pulpit to make an address. The Companions heard the trunk of the palm tree crying like a child. Prophet Mohammad (SAW) stepped down from the pulpit and hugged the trunk of the tree. The trunk then calmed down after sobbing like a pregnant she-camel. Jabir (may Allah be pleased with him) added that, as found in the collection of Imam Bukhari, “The tree was crying since it was deprived of the remembrance of Allah (SWT) made close to it.”

The pulpit has gone through several transformations over the centuries, from a wooden pulpit consisting of three rungs to the current Sultan Murad’s pulpit. The current pulpit, which was built by Murad Bin Saleem, the third Sultan of the Ottoman Empire, has a number of outstanding features. It is made of expensive marble with gold work. It has a small and attractive dome on top of it, which also rests on tiny marble feet. Its door is heavily decorated and has golden ornaments on it. Unlike the Prophet’s three-rung Minbar, it consists of twelve rungs. Three of the rungs are outside the door and nine of them are inside the door. The Saudi Government reportedly put more gold polish on the pulpit. 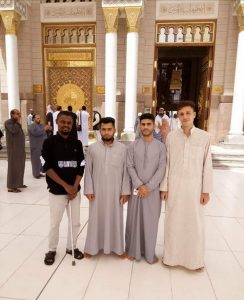 As we made our way out of the Raudah through the exit gate, known as the Baqee (we will explore it in our subsequent discussion on the subject), we saw the amazing site of the holy place – the resting place of Prophet Muhammad (SAW) – on the left side of the Raudah. Next to his grave are those of two of his beloved Companions, Abubakr As-Siddiq and Umar Bn Khattab. However, we couldn’t see their graves clearly because they were cordoned off by a gold mesh and black curtains.

As important as the Rasool (SAW) and his beloved Companions are to the Muslims, we should not worship their graves as erroneously done by some people. Rather, we should send salutations to them by saying, “As-salaamu Alayka yaa Rasoolu LAllah; As-salaamu Alayka yaa Abubakr; As salaamu alayka yaa Umar” (Peace be upon you, Oh Messenger of Allah, Oh Abubakr, Oh Umar)…

– Rasheed Abubakar is the publisher of Muslim News and the author of “Muslims and the Threats of the Media”. Email: rawshield123@gmail.com |Twitter: @rawshieldpr