Black Crows: The story of the bellydancer and her brainwashed son

Son: I’ll not only kill you. I’ll disown you on the day of judgement.

Mother: You’ll disown me after I raised you and put clothes on your back? After I provided food and water for you.

Son: What did you feed me with? With dirty money?

Mother: My money is dirty now? But it wasn’t dirty when you used it to restore a mosque. You had Qurans printed with it and offered food to fasting Muslims. You even bought a knife with it to kill your mother.

Son: My friends have honour more than you, whore!

Can you talk to your parents in this arrogant manner even if they earn a living from haraam? Of course you won’t, but some brainwashed ingrates who lack Dawah methodology of correcting mistakes can go to such lengths.

I remember some friends who, after attending Islamic camps those days, would misuse/misapply the lectures they had listened to.

One told his mother: “Quit selling beer! You’ll enter fire if you don’t quit!”, In fact, another one destroyed the crates of beer in his mother’s store.

Many have today abandoned their families to join extremist groups. This is a typical example of the character, Khaled, in a movie titled: “Black Crows”, an Arabic series that dramatizes life under DAESH (ISIS).

After threatening to kill his mother if she didn’t give up dancing (at clubs) in the previous episodes, Khaled ended up in an ISIS camp, the so-called ‘Islamic State’, to become one of the strongest “mujahids”.

His mother got to know about his disappearance and decided to search for him. She risked her life to enter the ISIS camp alongside others, who hid under the disguise of being one of the “battalion of jihad princesses”. 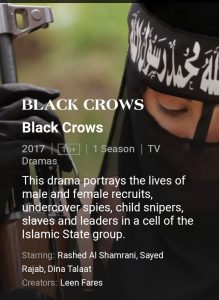 What did she see? What happened to her? Watch all the episodes on Neflix.

Shun extremism and terrorism. Respect your parents and if you must correct them, do so with wisdom as Allah says in Qur’an 16: 125