Governor of the State of Osun, Alhaji Isiaq Oyetola

‘Boko Haram are bandits parading themselves as Muslims’

The Governor of the State of Osun, Alhaji Isiaq Gboyega Oyetola has traced the recent attacks on mosques in New Zealand, churches in Sri Lanka and synagogues in the US to intolerance and a high level of ignorance, which according to him “are a twin disease that could wipe out the real essence of humanity in us if we do not take heed of the words of Allah – our Creator.”

Alhaji Oyetola was one of the dignitaries – despite his tight schedule as the Executive Governor of the State of Osun – who graced the most anticipated 25th Pre-Ramadan Lecture of the UNILAG Muslim Alumni (UMA), held at the J.F. Ade Ajayi (Main) Auditorium Hall of the University of Lagos.

In his welcome address as the Chairman of the occasion, Alhaji Oyetola emphasised Allah’s dominion over a plurality of the worlds and diversity in creation as established in the Noble Qur’an, many verses of which were cited by the keynote speaker, the Sultan of Sokoto, Alhaji Abubakar Sa’ad III.

The Governor of the State of Osun, who is equally an alumnus of UNILAG, said, “Allah has created multitudes where each individual, creature or phenomenon is unique in and of itself. It is this same diversity we mean when we say Nigeria is a multi-ethnic nation.

“The earth is populated by a beautifully diverse array of disciplines and human endeavours, including law, medicine, nursing, engineering, Political Science, Sociology and a host of others that see the world from different perspectives. This is what university education taught us – to fit into the world which Allah has created with inherent diversity.”

He however lamented the global spate of negativity and intolerance, which has led to xenophobia, ethnic and religious chauvinism, often wrapped around religion to justify evil and un-Islamic positions.

READ ALSO...  VIDEO: ‘Boko Haram is attacking people and you are collecting N1,000 per car’ – Borno gov shouts at soldiers

“We all know that negative theological impulses emphasize mostly on what you can’t do or shouldn’t do rather than what you should love to do for Allah and for your fellow man for a mutually beneficial co-existence. These negative and exclusive impulses are not inherent in Islamic traditions, as some scholars with a narrow perspective of the world will rather make us believe.

“Hate and extremism, therefore, is not intrinsic to Islam and was never a part of our spiritual DNA. If we are to promote diversity, we must chain this beast called extremism,” he noted.

According to the Governor, in Nigeria, thousands have lost their lives to mindless, nihilistic violence perpetrated by Boko Haram, who are simply bandits parading themselves as Muslims.

“Again in another clime, the white supremacist zealot, Brenton Tarrant shocked the world when he gunned down 50 Muslims from diverse backgrounds in cold blood as they prayed in mosques in New Zealand just a few weeks ago, and about 25 years before Tarrant went on his rampage, in the very year this Ramadan lecture started, one Baruch Goldstein, a Jewish zealot, gunned down Palestinian Muslim worshippers, killing 29 and wounding 125 on February 25th, 1994,” he said.

He therefore called out his fellow Governors in Nigeria and leaders of the world who engage in discriminatory policies that promote extremism, as he also called out extremists who engage in violence, killing innocent people and destroying property.

“I am a Governor today of the State Of Osun, ruling over millions of Muslims, Christians and traditional worshippers. I owe them all fairness and justice without discrimination, while affirming the diversity that Allah, the Creator of the world has entrenched within his creations.

The Governor congratulated the Unilag Muslim Alumni and the entire Muslim world in advance of the blessings of the forthcoming Ramadan 1440 AH, saying he is indeed happy to be an alumnus of the great citadel of learning.

“As a Muslim alumnus of UNILAG, I am indeed very happy that there are strong Muslim associations for students and alumni alike. They are critical communities to keep us grounded in our faith and a reminder of our obligations to Allah, our fellow men and women and the rest of creation.

“I shall remain grateful for the opportunity UNILAG has given me. I recall with nostalgia that the Jumat Mosque we left here as our set exited in 1978 was neither a tenth nor as big or as beautiful and magnificent as the one we have now. AlhamduliLlah!”

See more pictures of guests that honoured the colourful event: 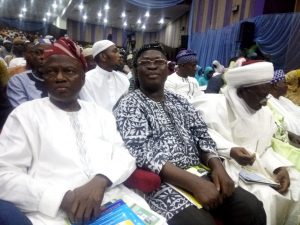 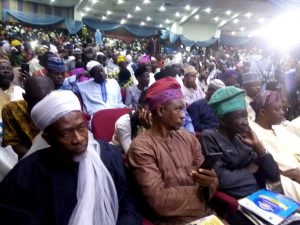