by Muslim News Nigeria
in Ramadan 2019
1

In the spirit of Ramadan, the month of mercy and compassion (also known as Shahru al-Muwasah), Muslim professionals from different walks of life, under the banner of the Guild of Muslim Professionals (GMP), left their comfort zones on Saturday, May 19, 2018 to break the Day 3 fast with the children of Bab-es-Salam Orphanage Home, Ikeja, GRA, Lagos.

It was the 4th Annual Iftar Lecture, but with a difference, as the men and women of calibre chose to break their fasts at Bab-es-Salaam, the only reliable Muslim Orphanage in Lagos, founded by the late Alhaji AbdulWahab Folawiyo to give the orphaned children a sense of belonging in the society.

According to the President of the GMP and Chairman of its Board of Trustees, Alhaji Akeem Oyewale, GMP is a non-profit organisation formed with the sole purpose of creating a platform for the professionals in the areas of networking, mentoring, icon building and entrepreneurship among its members.

The visitation, he said, was in line with the hadith of the Prophet which says, “One of the best deeds is to bring about happiness unto the believers through settling their debts, fulfilling their needs, and averting their adversities.”

According to Alhaji Oyewale, as Muslims, the need to remember the poor, the sick and those in difficulties in our prayers is one of the essences of Ramadan. 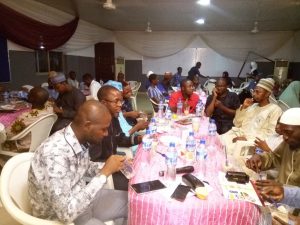 “It is not only a time of deep dedication to spiritual matters, it is also a period that calls for sober reflection and extending love to the less privileged in the society,” he added.

Shortly after the lecture, delivered by Associate Professor of Insurance from the University of Lagos and Chairman, Lagos State Muslim Pilgrims Welfare Board, Dr Tajudeen Yusuf on “Finding Our Voices in the Nigerian Society,” the elated children of Bab-es-Salam shared the same table with the Muslim professionals during the Iftar, with a variety of fruits such as dates, apples, grapes, and pineapples, among others.

The get-together continued after the Maghrib prayer and the children were obviously excited, as shown on their faces. The visitors and the kids alike were served different kinds of halaal drinks and appetizers before the main course – once again, a variety of meals, both continental and African dishes.

“It was a mixed feeling having my Iftar with these wonderful kids at the Bab-es-Salam Home,” a pharmacologist, Mrs Taofeeqah Abubakar-AbdusSalam said.

“I was full of pity for the kids and at the same time I was so happy that they are in safe hands, while the joy that emanated from their smiling faces showed how happy they were to have us around,” she said.

Mrs Abubakar-AbdusSalam called on Muslim groups to include visitations to the orphanages as part of their programmes, having realised that the orphans are always happy having people around.

Bab-es-Salam, meaning the Door of Peace, was founded about 30 years ago by the late business mogul and philanthropist, Alhaji AbdulWahab Folawiyo. It is the only reliable Muslim orphanage out of about 40 orphanages registered by the Lagos State Government. 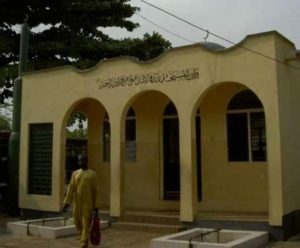 The Director of the Home, Ustadh Hassan Tahir, who led the congregation in the Ishah and Tarawih prayers commended the Guild of Muslim Professionals for the visit and gifts for the kids, stressing that, “as an Ummah (Muslim community), we are lagging behind in this area. We aren’t doing up to the expectations, except for some individuals and groups like GMP who are reviving the Sunnah of taking care of the orphanages.”

According to him, “Bab-es-Salam has between 40 to 50 children, excluding others who have graduated from university. There are others who are now on their own. These kids attend schools outside the premises of the home through the support of the family of the founder, who take care of the school fees. Some are also into vocational trainings and other activities. In fact, our children are the best in Karate in Lagos State.”

He added that, though the family of the late philanthropist have been playing an impressive role in running the home, the doors of assistance are still wide open to Muslim individuals and Islamic organizations to further the cause of the kids.

“To be frank with you, there is no extraordinary challenge. What we have here is similar to what every family experiences in running the home, where you have to take care of the home front, especially the children, by clothing, feeding and sending them to schools. AlhamduliLlah, the family of the founder has been providing for their needs.

“However, there is nothing wrong if Muslim individuals and organisations compete with one another in spending on the orphans and the needy. As Muslims, we have been ordained by Allah to take care of the orphans. Hence, we must not wait for the children to tell us they need our help before we reach out. It is a divine duty and we must answer the call,” he concluded.

– Rasheed Abubakar is the Publisher of Muslim News and the author of the “Muslims and the Threats of the Media”. Email: rawshield123@gmail.com | Twitter: rawshield123