The Palestine-Israel Conflict: Between business interests and media ethics

Many would have observed the inaccurate media reportage of the three-day Israeli deadly airstrikes on Gaza, which as at today has claimed 24 Palestinian lives, including an infant and a pregnant mother. Four Israelis also lost their lives to rockets fired from Gaza, a development which led to panic in Israel, as captioned by Independent UK in her headline; “Traumatised Israelis angry at government for inaction on Gaza.

“They were screaming ‘help me’,” the headline added, but the agonies of a Palestinian mother who cried “what is the sin of my children?” after losing her 1 year old baby and her pregnant aunt to Israeli airstrikes didn’t make headlines!

Although both Israeli and Gaza forces have agreed to a ceasefire, the media slant and the reportage of the shellings were in favour of the Zionist regime, thereby demonising Hamas, the political movement that is leading the Palestinian resistance.

For instance, the unprofessional CNN headline screamed; “600 rockets fired from Gaza…” with a conjunction, “Israel responds with airstrikes,” but in reality, Israel didn’t just respond with ‘airstrikes’. Rather, it responded with ‘massive strikes’ and bombardments by war planes and gunboats, which targeted innocent Palestinians in Gaza. 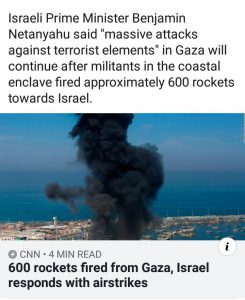 A critical and accurate media analysis of the crisis, which has been going on since the forceful and bloody creation of the Zionist state on Palestinian land by the British in 1948, would no doubt fault Israel’s decades of aggression, unflinchingly supported by the US.

Evidently, the Palestinians are the oppressed here. Gazans have been under Israel’s self-imposed siege for more than a decade. Does anyone need to be educated on what it means for a country to be under siege by another country? It’s like being forced into house arrest in the house you built by your tenant, and you must take permission from him before you embark on any action, even if you want to drink water, buy food, etc. Sadly, this tenant now controls the affairs of Gazans, including business, health, food and electricity regulation.

Many western media/writers know how the story started. It was their founding fathers that transformed the once wandering Jewish people to tenants in Palestine and later made them landlords, which led to the exodus of thousands of Palestinians. That exodus is called An-Nakba (The Catastrophe). 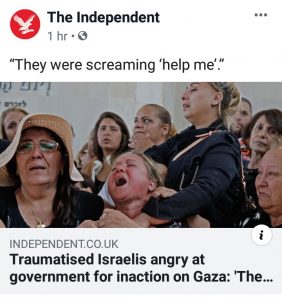 How does this affect the reportage of the Palestine-Israel conflict, one may ask? Advertisers are considered as one of the critical stakeholders in the media gatekeeping process. They play important roles in determining what to and not to publish – especially in the commerical news media, a category in which many Nigerian media fall.

Many international companies which directly benefit from Israel’s apartheid regime in the occupied Palestinian territories are the biggest advertisers in the western media (as well as the Nigerian press). In 2016, the United Nations Human Rights Commission blacklisted over a hundred of them, but its attempts to publish their names have been frustrated severally by Donald Trump’s US, who has been more Israeli since he assumed office as American President 3 years ago than Netanyahu himself.

Every year, the international firms, with their brands available across the world, including Nigeria, spend huge sums on PR in the media, running into billions of dollars. They influence the contents of newspaper stories as well as their editorials, and also pressure many media to either bury or report stories in their favour, as is currently playing out in the Israeli-Gaza offensive. Pathetically, the fear of running out of business makes the media abandon ethical reporting for business interests. 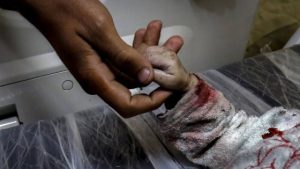 It’s a serious battle for brand survival, as many media houses and journalists who refused to dance to their tunes have lost their business and even physical lives. They weren’t only targeted while discharging their duties, they were also demonised and tagged with the toga of “Pro-Palestine media/journalists,” or better still, the usual rhetoric of “terrorist media organisations” for choosing to be fair and balanced, while refusing to be on the side of the oppressors. 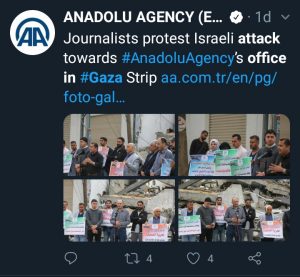 For example, Anadolu, the Turkish state-owned news agency’s building in Gaza was among the first points of attack at the beginning of the ongoing Israeli assault, and no matter the level of professionalism exhibited by the biggest Arab-English channel, Aljazeera English, she will still be tagged a terrorist media organisation, for her in-depth analyses of the Palestine-Israel conflict.

The powerful oligarchy working for the interest of the Zionist state, even among the Arab nations, are not only sponsoring damaging reports about the BDS Movement in the media, they are also lobbying countries such as the UK, US and other western countries to stop the activities of the non-violent body championing the global boycott of Israeli and its supporters’ products. See website: bdsmovement.net

Evidently, Boycott, Divestment, and Sanctions (BDS), a non-violent campaign movement is the last hope of the Palestinians for liberation and the biggest threat to Israel’s illegal occupation of Palestine. Facts available show that the Israeli government has spent over $15 million on combating BDS since 2015, part of which goes into media releases, editorials and jingles. 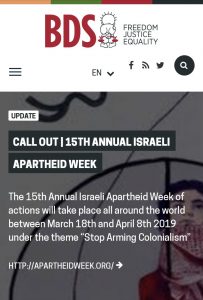 It’s unfortunate that while many lovers of peace across the world, particularly in South Africa (yes, there is BDS South Africa, registered as a solidarity group) give their nod to the cultural, business and academic boycott against the Israeli reign of terror in Palestine, many Nigerians, including Muslims who see liberation of Al-Quds as a religious obligation, are still sceptical about the legality of joining the successful campaign in spite of copious evidence from Islamic scriptures.