by Muslim News Nigeria
in Investigations
1

It was a mistake. We have withdrawn products – Owner

The picture of the packaged “Halal pork”, one of the products of B.W Foods Limited, Akowonjo, Lagos, went viral on social media platforms, as Muslim netizens continued to express their anger and displeasure at such an audacious affront to Islamic sensitivities.

“They have started again oo. SubhanAllah! In the month of Ramadan. Packaging pork for public sale and standardising it with Halal rubber stamp. NAFDAC and other agencies MUST hear this before it escalates,” ARAB wrote on WhatsApp.

However, in a swift reaction less than 24 hours after the subject became a matter of heated debate on social media, the CEO and Managing Partner of the company, Mr Babatunde Wilikied admitted that pork is one of his company’s products, while the ‘Halal’ stamp was a mistake from the printer.

In an exclusive interview with Muslim News on Sunday, Mr Babatunde apologized to the Nigerian Muslim community over the apparent mix-up, stressing that the error was his printer’s, who is incidentally a Muslim.

“In fact, about 80% of my staff are Muslims, and I had to cut my trip abroad short when I heard that the matter has generated a lot of controversy. I summoned him this morning and asked why he caused the embarrassment.

“Pork is not something we sell to the general public, not to talk of Muslims, because we know the consequences and sensitivity of the issue. We only sell pork on request, and you can visit any of our meat outlets, you will never find it on our stand. It is specifically requested by only one store, and that is because of the concentration of Indians who live around that area.

“So, my brother, with due respect, we apologise. This error was not intentionally committed, and the product has been withdrawn,” he said.

The owner of the company, who claims to be a regular sponsor of Muslim programmes on radio and TV every Ramadan, also admitted that the unsigned apology letter that surfaced online was hurriedly issued out this morning by his staff because of the sensitivity of the issue.

“Like I said, I accept responsibility. It is a mistake and apart from the letter we hurriedly issued out this morning, you will see another one very soon because I observed some errors. However, I still asked my staff to release it so that it won’t seem to our Muslim brothers as if we are not sensitive. We are very sorry”, he reiterated.

Below is a signed copy of the original letter of apology from Mr Babatunde Wilkey, CEO/Managing Partner of BW Foods Limited, the company that produces the wrongly branded ‘Halal pork’.

APOLOGIES FOR THE PRODUCT LABEL ERROR

Our attention has been drawn to one of our products, PORK PACK, which has HALAL stamp on the label.

We sincerely apologise for this HUGE ERROR on our part. This was a printer’s error on our template design.

At B W FOODS, we know the importance of HALAL food to our esteemed Muslim clients and we have maintained a high level of compliance to ensure that all our products meet the standard.

Pork is not our usual menu except on request by specific person, store or Hotel.

BW FOODS have been in business for over a decade. We have maintained long-standing relationship and of the best practice with our Muslim brothers’ and sisters.

We regret this error and in the spirit of RAMADAN solicit for your forgiveness and understanding.

We will continue to maintain a high standard of quality product and respect our numerous customers’ need. 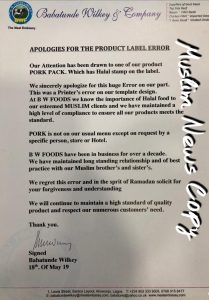