His shoe too big to wear – Hajj Mabrur’s MD

It was a day of sober reflection yesterday, Monday, June 10 for top Islamic scholars and hundreds of Muslim faithful who attended the Janazah of the late Secretary-General of Ansar-ud-deen Society of Nigeria, Ogun State chapter, Alhaji Yisa Oludayo Solate at the Society’s Central Mosque in Sagamu-Remo, Ogun State, South-West Nigeria.

Alhaji Solate, 74, died in the midnight of Sunday, less than 24 hours after he hosted the 10th edition of his annual Qur’an competition in Sagamu, in a collaborative effort with Ansar-ud-Deen Youth Association.

He has since been buried according to Islamic rites at the Sagamu Muslim Community Cemetery. 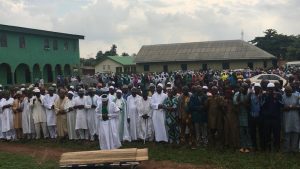 In a chat with Muslim News, his eldest son, Alhaji AbdulHameed Solate described the passing of his father as shocking, saying he was healthy and full of life at the Qur’an competition held few hours before he was pronounced dead.

The junior Solate, who is the Managing Director of Hajj Mabrur Ventures said, “My father was fine and healthy. He was full of life all through the Qur’an competition which he had been sponsoring for 10 years, with the 10th edition staged on Sunday. The Quiz was rounded off around 5pm and he drove himself home and even called some of the guests that attended on phone, just to be sure they got to their respective homes safely.

“He observed Solatul Ishai with his household at night before going to bed. He woke up suddenly around 12 midnight, feeling uncomfortable, probably as a result of the stress of the day. Without much delay, he told the people around to take him to the hospital and as Allah would have it, he didn’t reach the hospital before he died.

“I received the shocking news around 1:30am after it was formally confirmed at the hospital that he had died and returned to his Creator,” he said. 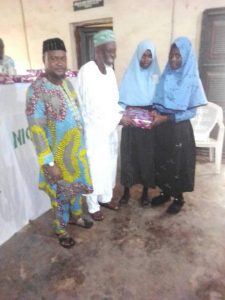 While speaking on the legacies of his late father, Alhaji Solate Jnr described him as a man who lived a simple life and brought the entire family together.

“He lived a very simple life and the shoes he left behind are too big for any of his children to wear, but we can only try our best and keep his legacies on. He was a unifying factor in the entire Solate family. He had just four children but accommodated other family members; about 12 to 13 children of us grew together under his roof. He could have afforded sending just his children to the best private schools but instead, he used the resources to give all of us the best education we could have wished for.

“As his children, we are proud of and couldn’t have asked for a better dad than the one we were blessed with by Allah, and thus would have wished for him to be around for much longer, but Allah knows best and we understand it is not how long but how well. He was and his life will remain an inspiration for us.

“My sister, the last born of the family, who attended the Quiz with her husband was telling me on the same day how big the Qur’an competition has become, being an annual event that comes up on the first weekend immediately after Eid. We were then discussing on how to get involved in the subsequent editions, without knowing that was the last he would sponsor. We will sustain his legacy and continue from where he stopped,” he said. Muslim News’ findings revealed that the overall winners of the annual Qur’an competition were presented with gift items for their outstanding performances courtesy by the late Alhaji Solate.

The Chief Imam, Ansar-Ud-Deen, Sagamu branch, Imam Abdulfatai Idrisul Awwal, who was also at the Janazah, revealed for the first time that the late Alhaji Solate gave the society N1 million for the building of the society mosque and asked him not to disclose his name as the donor until his death.

The Grand Mufti, Conference of Islamic Organisations (CIO), Sheikh Dhikrullahi Shafi’i, who set aside other commitments in Lagos for the Janazah prayer in Ogun State, showered encomiums on the late Solate, adding that lessons abound in his life and his contributions of to Da’wah.

Describing him, he said: “He was not a regular Islamic preacher, though, his entire lifetime represented one. He was humble, pious, enduring and a rallying point for all Muslims irrespective of their affiliations. He was rich and spent all his riches in the cause of Islam.”

Sheikh Shafi’i said his demise would be felt by all Muslim organisations. “We would miss him in so many ways. He was one of those elders that everyone would always run to for consultation. His vacuum would be felt within Ansarudeen as a society, his family and within the Muslim community as a whole,” he added.

The Vice Chairman Ansar-ud-Deen, Sagamu branch, Alhaji Solarin Tajudeen Adekunle described him as a virtuous philanthropist who was active throughout his lifetime.

He advised Muslims to emulate his legacies in terms of philanthropic gestures.

He said: “He has a mosque here in Sagamu that he built with his own money and other lands he donated for building of mosques. He has been using his money to finance various Islamic works for the past 20 years.”

The Chief Imam Ansar-ud-Deen, Sagamu branch, Imam Abdul Fatah Idris Awwal and his counterpart from Sabo Muslim Community, Imam Daud Allinson urged Muslims to be dedicated and work for the unity and development of Islam, saying, “Alhaji Solate lived all his life for God; his time, money and resources. We are grateful to God for his life and legacies, and that all his children are well learned in the Islamic religion.”