Moshood Kashimawo Olawale (M.K.O) Abiola was a typical symbol of love for the freedom of ordinary wo/man. He was a philanthropist. A philanthropist is regarded as a prosperous person who gives up a large share of his life and property or wealth to the work of improving the lot of the people as a religious service.

Philanthropism is akin to charity and may be regarded as an advanced form of charity in that charity concerns itself in the main with the present needs of individuals. Philanthropism looks further not only to the present but also to the future, and seeks to elevate human life on a large scale. It is the disposition or active effort to promote the happiness and well being of fellow human being.

There is no doubt that philanthropism is a social responsibility, religious obligation, an avenue to gain political prominence or may even be done for publicity or image laundering.

Philanthropic activities joins one heart with Allah (Qur’an 2:3) on one hand and joins one’s heart with the society on the other. This explains the prophetic statement that, ‘the best of mankind are those that of benefit to mankind.’

A philanthropic person through his effort has overcome stinginess ( Qur’an 92: 5-10) and thereby learns that one owns nothing and whatever in his/ her possession belongs to Allah as Lord of the universe (Qur’an 1:1).

The act of charity done in the cause of Allah does not decrease one’s wealth but the wealth is increased (Qur’an 2:261) and the giver is reminded that Allah is not poor to need our wealth but as an investment in a spiritual enterprise that does not suffer depreciation which is rewarded with paradise (Qur’an 18:107-8). Muslims are enjoined to aid the cause of Allah through all righteous means and in return attains the help of Allah (Qur’an 47:7).

Islam encourages the Muslim to do more philanthropic acts toward other people as the Prophet was reported to have said; “righteous work that outlives us are; knowledge that s/he taught and spread among others, a righteous child one leaves behind, a copy of the Qur’an bequeaths to heirs, a mosque that one builds, a rest house for wayfarer, a Well dug for others and a charity given out of property during one’s life time” (Ibn Majah).

Abiola’s philanthropy was famous throughout Nigeria. He supported education, sports, and numerous social and political causes. He was the pillar of Sports in Africa and also established the famous Abiola Babes in Abeokuta.

He was a bridge builder as he donated money to Churches and many other socio-cultural groups in Nigeria. There is no gain saying the fact that there were numerous contemporaries of Abiola who had enormous wealth like him but never considered it appropriate to donate any part of their wealth to the society with the same zeal Abiola carried it out during his life.

Abiola was nicknamed “father Christmas” and “Chief launcher” due to his readiness to give out in charity or participate in any public launching to contribute his widow mite.

He called for reparations from the West to compensate African peoples for the transatlantic slave trade. At his death, Abiola’s business interests spanned 60 countries and included firms engaged in banking, shipping, oil prospecting, agriculture, publishing, air transportation, and entertainment. 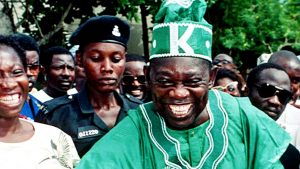 His Nigerian companies alone employed close to 20,000 workers. He was able through his industrial establishments created a harmony between the material and moral well being of a number of Nigerians. This gesture placed a great number of people on sound moral and economic foundation thus providing a spiritual orientation to material effort.

It is therefore difficult to deny his achievements in changing the standard of living and economic growth of a number of people. His involvement in the establishment of schools, provision of facilities for government owned educational institutions and scholarship for indigent students was meant to provide many children with the tool that would transform their lives into something better than that of their parents.

The lesson of the philanthropic life of Abiola stems from the fact that Muslims are encouraged to compete in doing righteous deeds for the sole purpose of attaining the pleasure of Allah ( Qur’an 2: 148, 3: 134).

Today, we cry for dividends of democracy while Abiola political slogan was farewell to poverty, he promised us hope in 1993 but the hope was dashed and Nigerians still yearn for a leader to lift them up from sub-human status they currently enjoy. He was not a perfect person and he never claimed to be one. May the Lord of the Universe forgive him of his shortcomings.

Among the facilities provided by Abiola include school uniform to all students, textbooks, buses for the transportation of the staff and students and free mid day meal. The school graduated its first set of thirty eight students on June 1984 and recorded a hundred percent in the School certificate, General Certificate of Education. The school also received the state Government Award in 1985 as the best school in the state during the session.

Apart from Abiola’s interest in western education, he also showed a great deal of enthusiasm in assisting Islamic education by establishing the Zulikha Abiola Memorial Quranic Centres and Zulikha Abiola college of Arabic and Islamic Studies, the schools he named after his mother.

Abiola took over the expenses of these local Quranic schools including the payment of salary to the teachers. He also provided graduation attires to all graduands free of charge. There were about two hundred and sixty four centres located in Abeokuta, Owode, Ifo-Ota, Obafemi and Odeda local Government Areas of Ogun state of Nigeria.

The desire of Abiola to provide a follow up training for the graduates of these centres that led to the establishment of Zulikha Abiola School and College of Arabic and Islamic studies. The school was formally established in October 1985 with about one hundred and twenty students.

The school curriculum was designed after the 6-3-3-4 National policy on education. The proprietor provides all the facilities including the payment of teachers’ salaries and Abiola did not allow the students to pay any fee throughout the period of their studies.

The demand to provide a middle level manpower for Muslims in Nigeria in area of Arabic and Islamic education led to the establishment of Zulikha Abiola College of Arabic and Islamic Studies also in 1985 to run a three year Diploma programme in Arabic and Islamic Studies. The college was able to secure an affiliation with Usman Dan Fodiyo University for its programme which provided graduates of the college to secure direct admission to the University to pursue a wide range of courses ranging from Arabic, Islamic studies, Shari’ah and Common Law. The students in the college just like their counterpart in the sister school also enjoyed free tuition as Abiola provided them the facilities including the payment of salaries of workers. The philanthropic activities of Abiola extended to government owned higher institutions in Nigeria. He built an ultra modern library for Ogun state polytechnic and also stocked the Library with books in 1985 which was named after his father.

He stated that when his father died in 1979, he had enough money to organize funeral party as practiced in Nigeria but decided to use such money to build the Library to benefit mankind. His financial contributions to the polytechnic must have informed the authority of Ogun State to rename the polytechnic after him. In 1991, he gave one million Naira to each of the State and Federal Government owned universities to build hostels for the students. Abiola also established a twelve thousand dollars award for academic excellence to Al-Azhar University in Cairo in 1985 for the best Nigeria student graduating in Islamic studies and the best non-Nigeria graduating in the same course.