The institution forces Muslim students to attend church, denies them the right to pray and wear Hijab – Prof Akintola
————
All the students and staff must attend chapel but we also allow the Muslims to observe their prayers – Prof Oyawoye, Dean of Science

This was disclosed in a press statement circulated on Tuesday, 18th June, 2019 by the Director of MURIC, Professor Ishaq Akintola.

“The practice of any other faith on campus except Christianity is banned. Muslim students must not be seen observing Salat. Hijab is a taboo in Adeleke University. Yet all these Islamophobic practices are smartly hidden from prospective students of the institution until they have paid the exorbitant school fees and can no longer withdraw.

“In particular, we invite NUC to take a look at the students’ handbook of this institution, especially pages 7, 49, 50, 56 and 60. These pages, to our mind, contain rules that infringe on the religious freedom of Muslim students. As a regulating body, NUC has a duty to intervene in this matter as part of its oversight function on Nigeria’s universities.

“Such intervention is necessary at this juncture to enhance quality control. We remind NUC that man is body, soul and spirit. These three organs must function without hinderance for students to perform maximally.

“As things stand today, Muslim students of Adeleke University have been deprived of the spiritual component of their humanity. We therefore call on NUC to investigate this issue as a matter of urgency. Religious repression is a potential threat to peace, law and order,” he added.

But in her reaction, while speaking exclusively with Muslim News, the institution admitted that all students (including the Muslims) and staff are mandated to attend the university chapel, but claimed that the allegations of serial violation of the Muslims students’ fundamental rights are baseless and unfounded. 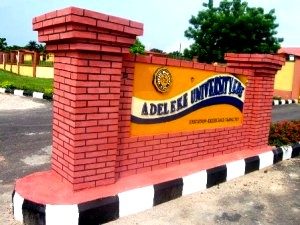 Mr Abolaji Samuel, an administrative officer who spoke with our correspondent, said the position of the institution has been made clear by its Dean of Faculty of Science, Prof. Bukola Oyawoye.

According to Prof. Oyawoye, “Adeleke University is a faith-based University like Redeemers, Covenant, Ajayi Crowther and other universities which fall in that category, but yet, Adeleke University respects and gives all the needed support for her students to practice their religions without any intimidation whatsoever.”

The University don related how Muslims students of the University are being treated before, during and after Ramadan.

“We allow Muslim students observe their prayers at the right times and during Ramadan, the University gives Sahur (midnight meal) between 4am and 5am, and provides fruits and also dinner for them to break their fast. We also provide buses to take them to the Mosque during Jumat prayers on Fridays.

“As part of the University rules, once you are here, all students including the staff are to attend the chapel. The chapel does not change your religion. If the school wants to change their religion, the University would not convey Muslim students to Jumat service every Friday”, he added.

“MURIC knows right from the beginning that Muslims can seek knowledge anywhere and they know when they say something is faith-based.

“The daughter of the late Islamic leader, who was the leader of the League of Imams for the South West which also includes Edo and Delta states, Sheikh Ajisafe, Kabirat Ajisafe, graduated from our Department of Microbiology.

“When the Chief Imam died and there was no support for his daughter to continue, the child enjoyed a scholarship from the founder, Deji Adeleke, for three years after the school wrote to him on sympathetic grounds. MURIC can speak with her. She was very grateful to Adeleke University and that did not change her religion”, Prof Oyawoye insisted.