A free flow of tears of joy ensued at the Zakat and Sadaqat Foundation Health Relief Disbursement ceremony on Tuesday, as beneficiaries received cheques ranging from N1.5 million to N6 million each for the treatment of different major ailments.

A total amount of N36 million was shared among 53 beneficiaries at the Foundation office, which is located at the Tafawa Balewa Square (TBS), Lagos.

The beneficiaries called on good spirited Nigerians to donate more to the foundation, even as they expressed appreciation to the ZSF for easing their agonies and putting smiles on their faces.

Nigerians, help me. I don’t want to lose my daughter

Sanni Hafsah came on behalf of her daughter, Ganiyat, who has been diagnosed of a kidney disease and has been receiving treatment at the Lagos State University Teaching Hospital (LASUTH).

Hajia Sanni burst into tears as she narrated her daughter’s ordeal and her struggle to save the life of her child to Muslim News.

She said, “It was discovered when she was about entering JSS 2. She ought to take her WAEC this year but due to the illness, she can’t. As we speak now, her legs are swollen. Doctors said a kidney transplant is the solution and I have volunteered to donate one of my kidneys.”

According to her, the total money needed is N8.5 million. “I have raised N3.5 million before Z & S gave me N2.5 million today. I am very grateful to the organisation for their support but it’s not yet over. I still need N2.5 million to fly her abroad for immediate treatment”, she added.

The Hijabi Muslimah expressed her appreciation to the Foundation for its donation of N2.5 million, while calling on all Nigerians to assist her in raising the remaining N2.5 million so as not to lose her child.

My son has a hole in his heart, cataract in his eyes

Mrs Balogun Ruqayah came with her little son, Kamaldeen, who has a hole in his heart, cataract in his eye and also a hearing problem. 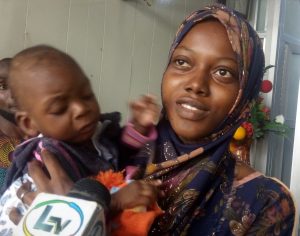 “I give thanks to Z & S for their assistance and may Allah increase every donor to the Foundation in wealth and health. Anyone who can help Balogun Kamoldeen for his surgery should please assist us in all ways they can,” she said.

After receiving N6m, my son needs another N6m to hear and speak again

Unlike Kamaldeen, little Ramadan Muhammad has speaking and hearing problems with his two ears and like his mother, Aminat Muhammad narrated, “If we are able to raise N12 million, my son will be able to hear again.”

Hajia Aminat’s joy knew no bounds after receiving N6 million cheque from the Foundation, while calling on all Nigerians to assist in raising the remaining N6 million.

“My name is Aminat Muhammad and my son is Ramadan Muhammad. He has hearing problems with his two ears. The doctors said he would need N12 million for surgery. Z & S gave me N6 million and we need N6 million more.

“The surgery is due for September in the United States of America. I thank Z & S profusely and I pray Allah reward them abundantly. I call on Nigerians to please help me raise the remaining N6 million”, she said.

Miftaudeen got N1.5m, but needs more for hip surgery

Mr Miftaudeen Ajibanwo, a tailor, is one of the beneficiaries with a hip problem. He came to the event with the aid of an assistant, seeking for N3 million for surgery.

“ZSF gave me N1.5 million and I’ve gotten about N300,000. I appreciate the donors and pray Allah continue to bless and provide for them. I call on well-to-do Nigerians to come to my aid and assist me,” he said. 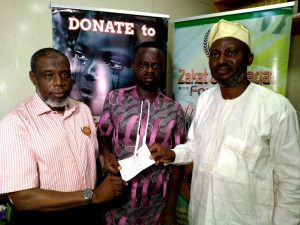 In an interview with Muslim News, the CEO of Zakat and Sadaqat Foundation, Prince Sulayman Olagunju said insufficient funding is the major reason the Foundation could not foot the full bills of the patients, which keep increasing every year.

He therefore called on Muslims eligible to pay Zakat, the third pillar of Islam to stand up to the challenge and pay their Zakat to Z & S.

He said, “Muslims need to pay their Zakat. It is compulsory for Muslims who have the means. If they refused to pay it as at when due, they are not going to escape the punishment of Allah. Also, they should know that when they help people going through health challenges, they will be happy because they are saving lives.

“Someone needs N12 million but we managed to give him N6 million. Another person needs N3 million, but we gave her N1.5 million, etc. This is what we are doing right now due to the limited resources.

“There are still a quite large number of applicants we are not considering at all because the funds are not there. The little we have been able to gather is what we have disbursed. We call on Muslim donors to visit our office and foot the bill of any of the patients.”

Speaking on the transparency of the process, Prince Olagunju said, “There were so many steps involved in assessing our applicants for charity. The first is the application and we have a window of time for that; two months to Ramadan.”

According to him, after receiving the applications, the next line of action is to verify the genuineness of requests. “We thereafter invited the applicants for interviews. After that, we carried out independent investigations to ascertain if the information provided during the interviews were genuine.

“The lucky ones were invited for documentation of the illnesses and we also verified if we could undertake the treatments for cheaper prices in other places. We prefer to treat them in Nigeria for those who can be treated here. It is only when we have exhausted our research and there are no other alternatives than to treat the patients abroad that we encourage them to travel,” he added.