Vanguards Principal to Graduands: Shun sins, be focused and make Allah your goal

Sixty-two newly graduated students of Vanguards Academy, Nigeria’s leading faith-based secondary school have been advised to shun sins, remain focused and make Allah their goal as they begin the next phase of their lives.

Making this appeal yesterday at the Vanguards Academy 13th graduation ceremony held at the school premises in Odonsengolu, Ijebu Ode, Ogun State, the Principal, Mr Lukman Alatise said a faithless being is a godless being, and called on the graduands to adhere strictly to the worship of Allah and shun sins, for sins destroy man and his future.

“Seek Allah’s assistance on distractions thay may preoccupy your mind,” he said.

According to him, “you must know that the responsibilities before you are more than the time at your disposal. You should be wary of falling into the docility of procrastination, for it is the thief of time. Your life is a bundle of days, the moment it passes, you may not be able to retrieve it.”

He urged the students to keep the company of good friends who will better their lot in this world and the Hereafter.

“Be careful of friends who will not add value to your life except to mislead you. Remember that the similitude of good company could be attributed to friends with pleasant odour while bad company is attributed to filth. 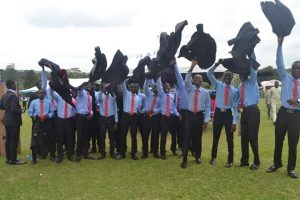 “Dear students, many things school has taught you, hold onto them. Others that you aren’t exposed to, they were not out of forgetfulness but deliberate. Do not be distracted with them.

“Your obedience to your parents isn’t negotiable for this is the secret to your success,” he added.