For the parents whose children graduated from Vanguards Academy yesterday,  Saturday, their joy and excitement knew no bounds, as they expressed optimism for better future.

The experience was emotional for the families, friends and well wishers who thronged the school premises at Odonsengolu, Ijebu Ode, Ogun State, to celebrate with the graduands, numbering 62.

Alhaja Toyyibah told Muslim News that for the love of the school that has achieved so much academically, morally and the peak of spirituality in the lives of its hundreds of graduated students, her child sacrificed a year.

“She eventually gained admission and today she is among the graduating students. The school expects more from her, to become an ambassador of Islam, perform excellently well in higher education and come back to this great school to  contribute her own quota to its development.

“To the graduands, they should know that the sky is just the starting point. They should put what they have learnt to practice and represent Vanguards Academy wherever they find themselves and always be proud of it”, she said.

He said, “Since he came in, though he was good, the school was able to maintain and push forward his standards. His intellectual capacity was okay but when he came here, he built on the potentials he had. 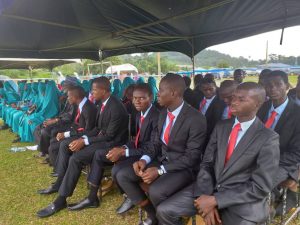 “The school was built on a vision. It is distinct because it is a faith-based school and built on a particular ideology and philosophy. They (the students) are built for leadership roles and the ideological, Islamic and sound western education”.

Mr Qasim Saliu Alawode said that only Allah knows what his son would have turned out to be if he wasn’t enrolled in Vanguards Academy.

In his words, “AlhamduliLlah, he was enrolled in Vanguards Academy because if we had not, I don’t know what he would have turned into because he (Khalid Alawode) is a formidable child, but Allah softened him after joining Vanguards Academy. His Ibadah and everything is now going smoothly.”

When Muslim News spoke with some of the graduands, they revealed their plans after graduation from the prestigious school.

Miss Oreagba Halimah said, “the school should expect our Islam and academics to continue to improve and become better and more importantly, expect us to stand out in life. I want to become a poet and a medical informatics practitioner and I also want to change people’s understanding of Islam.”

For Miss Khadeejah Maruf, who said her six-year journey in the school can be described as a hospital experience, Vanguards Academy has improved her moral, spiritual and academic life.

She said, “Like I do say, this place is a hospital and they have given us what they have. What we have been given is okay for us to use outside. I want to be the youngest journalist by Allah’s will and I also want to work in Al-Jazeerah”.

Some of the awardees for the Shumuliyah (comprehensiveness of Islam) Award include the trio of AbdulGaniyy Abdullah, Tirmidhy Abubakr and Bakre Faizah emerging as the best prefect, and AbdulHakeem Alugo Khadijah for Tajweed and Arabic Language.
Abdullateef Usamah was honoured for fasting, Adeleke Fatimah for consistency in punctuality and the first row, Akanji Khadijah for Academics, Alawode Khalid for punctuality, First Row Consistency and Tilaawah, Madiu Durowoju Romlah won the prize for Academics and Tilaawah, and Keshinro Musab emerged for Academics and Tajweed.
Others include Aro Muadh emerging for Dua, Oseni Al-Ameen for Hifz, Qasim Khuwaylah for Fasting and Dua and Salmon Muhammad for Arabic Language, among others.