Barely a week after the merriment of Eid-ul-Adha, Nigerian Muslims have been thrown into frenzy of a new viral sensation known as the “Ghaashiyah Challenge” and it’s beginning to dominate Facebook timelines and WhatsApp statuses.

The challenge, started by some students of the famous Markaz ul Uloom Arabic and Islamic Studies, Alagbado, Lagos, is done by posting a selfie video of recitation of Suratul Ghaashiyah, Qur’an chapter 88, verse 17 –  22 in the traditional “Markazy” tone.

The idea, Muslim News gathered, started as a mere form of entertainment about month ago by the students of the institution during their siesta period, but resurfaced a few days ago, and has practically gone viral on social media.

It was started by this man…

The challenge tests the reciter’s ability to hold his breath for long, while reciting the verses with elongation, and without stopping in-between.

Just within a few days of its resurgence on the social media, the wave has moved from Markaz to others institutions like Daru Dawat Wal Irshad, Isolo, Lagos to Maadu Liarobiyat Arabic school in Ibadan.

Pundits believe that though, here is no dedicated hashtag yet for the challenge, it has helped to promote the popularity and acceptability of the “Markazy” recitation style among young Nigerian Muslims who are fast falling in love for it.

This man popularised it…

“It is an opportunity to encourage oneself and others on the beauty of reciting the Qur’an as Allah said we should compete with one another in good deeds”, supporters of the Challenge said in an interactive social media chats with Muslim News, urging anyone who wants to participate in the challenge to henceforth add #Ghaashiyah challenge to the video.

However, critics have warned that the practice may lead to “show off” which could in turn cause “fitnah”, especially if the partaker is a female with a melodious voice. Others warn against “the unnecessary elongation” inherent in the recitation style as it could lead to distortion of meanings.

Commenting on this view, the Muslim News resident scholar, Ustadh Ibn Taofeeq AbdulAzeez opined that there is nothing wrong with the Challenge. He said, “if anything will need competition and challenge, the Qur’an should be the first, it is better than the Hfactor challenge, 10yrs challenge and all those dancing stuffs challenges.”

Nigerian Middle East based scholar faulted the critics who termed it as show-off saying, there is no show-off in what isn’t known to mankind, only Allah can determine if an act is done to show-off because it is an act of the heart. 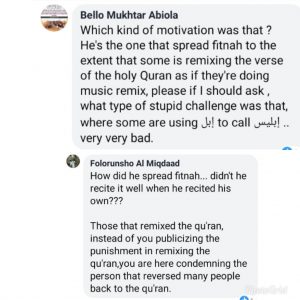 He nevertheless called on the reciters to purify their intention to fall within the intent of either promoting the Qur’an, and/or to make people return to the Qur’an, through the challenge.

“We don’t know the hidden, we can’t judge anyone with or accuse him or her of show-off, we can only advise whoever wants to engage in it to avoid show-off and purify his or her soul and intention. They should also use the opportunity to perfect their recitations by reciting the Qur’an with Tajweed and get maximum reward from Allah,” he added.