All praise is due to Allah who has created humanity from a single parenthood. May His choicest salutations continue to descend upon our Master and Leader, Muhammad sallallahu alayhi wasallam, who abolished racism in all its forms.

The Noble Qur’an states: “O You who believe! Indeed We have created you from a single male and female and We have made you into nations and tribes so that you know each other. Verily the noblest among you in the sight of Allah is the one who is most deeply conscious of Him. Behold Allah is all knowing, all aware.” Qur’an 49:13

The world watches with absolute disbelief as xenophobic violence once again rears its ugly head in the land of the Rainbow Nation.

Xenophobic attacks in South Africa displaced thousands of people and killed scores just a few years back. Tens of thousands lost their homes, while mobs raped, robbed and even burnt helpless foreigners, especially the Nigerian nationals to death! Have we not learnt positive lessons from our past?

One of the defining realities of our age is migration. As the world shrinks and economies integrate, national boundaries gradually become extinct. Mass migration has created a battle for scarce resources and even scarcer jobs. This resulted in the ‘survival of the fittest’ which eventually sparked the xenophobic attacks. Xenophobia is the fear, dislike or contempt of foreigners or of a people significantly different from oneself.

What lessons do we learn from this human tragedy and how do we ensure that it does not repeat itself again? 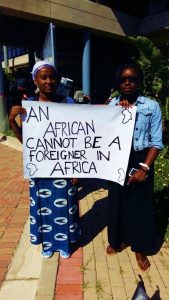 We need to begin by acknowledging that the human race stems from a single parenthood. We are all brothers and sisters by virtue of our common parenthood. Race, ethnicity and language are convenient labels of recognition. The Noble Qur’an states: “Oh you who believe! Indeed We have created you from a single male and female and We have made you into nations and tribes so that you know each other…” Qur’an 49:13

A man once visited the Masjid of Nabi sallallahu alayhi wasallam in Madinah. There he saw a group of people sitting and discussing their faith. Among them were Salman who came from Persia, Suhayb who grew up in the Eastern Roman Empire and was regarded as a Greek, and Bilal who was an African – radhiyallahu ‘anhum.

The man then said: “If the (Madinan) tribes of Aws and Khazraj support Muhammad, (it is understood because they are Arabs like him) they are his people. But what are these (foreign) people doing here?” (Implying an obvious dislike for foreigners)

Rasulullah sallallahu alayhi wasallam became very angry when this was reported to him. He went to the Masjid and summoned the people to prayer. He then addressed them saying:

“Oh people, know that the Lord and Sustainer is One. Your ancestor is one; your faith is one. The Arabism of anyone of you is not (by virtue of the nobility of) your mother or father. It is no more than a tongue (language).”

Rasulullah sallallahu alayhi wasallam further said: “Let people stop boasting about their ancestors. One is only a pious believer or a miserable sinner. All men are sons of Adam, and Adam came from dust.” (Abu Dawud)

Humanity is one unit, the family of Allah. Its individuals are members of one society bound together by their common origin, which is so comprehensive that it includes all differences within its oneness.

Rasulullah sallallahu alayhi wasallam said: “Humanity is the family of Allah; the best human is one who is kind to His (Allah’s) family.” (Mishkat)

As humans, we often tend to pledge indiscriminate allegiance to people of our own kind. We often do so at the cost of justice and impartiality. Rasulullah sallallahu alayhi wasallam was once asked whether loving your own kind is tantamount to bigotry. He replied: “No, except if a man helps his own people in doing wrong.” (Ahmad)

Among the numerous blessings of Hijrah, one of the most important was that of ‘Mu‘aakhah’, the creation of brotherhood between the Muhajireen, the emigrants from Makkah and the Ansaar, the helpers of Madinah.

Rasulullah sallallahu alayhi wasallam assembled them at the house of Anas radhiyallahu anhu and told them that the Muhajireen had left all their belongings in Makkah and were now penniless and shelter less. The Ansaar willingly agreed to the creation of a relationship of brotherhood between the two groups.

Each Ansari took his Muhajir brother to his house and gave one-half of his entire property to him. Under the guidance of Rasulullah sallallahu alayhi wasallam, these two groups became like blood brothers.

While the Ansaar considered it a privilege and honour to assist their Muhajir brothers, the latter did not wish to be a burden on them for long. Very soon, the Muhajireen through trade, industry and handwork, were able to stand on their own feet.

As Muslims, we need to pioneer change beginning with our own conduct and attitudes. We need to:

Acknowledge: We need to first acknowledge that we may consciously or unconsciously be guilty of ill treating ‘foreigners’ both within our Muslim community and outside our community.

Watch our words: We need to guard against making sweeping statements that smack of arrogance, pride and are demeaning to people of other ethnic origins. If you observe something wrong in some persons’ behavior, do not generalize, nor relate it to their ethnic origins. Attribute it to the person not his race or nationality.

Challenge attitudes: If someone is guilty of racist conduct in your presence, do not become a passive spectator. You are bound to invite people to good and prohibit them from all that is evil.

Share in the sorrow of other people: Have you visited a sick colleague, or a neighbour of another ethnic group? Good relations are built not only in the good times, but during difficult and tragic moments as well. Visit the sick, console the bereaved, feed the poor, empower the destitute without reserving your compassion and generosity to those of your own kind.

Rasulullah sallallahu alayhi wasallam has said: “Allah will not show mercy to one who is not merciful to (fellow) men.” (Bukhari & Muslim)

Smile: Smiling is an act of charity. How often do you smile? Who do you smile at? Do you limit your grins to your own ethnic and cultural group? Smiling is charity not just to your own people. Expand your smile to all as it opens close hearts. It is not just words, but facial expressions that also indicate racial degradation and intolerance. It is not enough for us to just avoid verbal jabs. Language is not just about words; it is about body language too.

Guard against exploitation: Those that are in your employ must be treated with dignity and respect. Pay them enough so that they are able to maintain themselves with dignity. Do not impose on them so much work, or so long working hours that may be overbearing.

May Allah grant us the ability to mirror the beautiful teachings of our religion and may He cleanse our hearts from all forms of pride and arrogance. Ameen