Islamic work in Nigeria got a boost on Saturday as two notable Muslim families in the Da’wah circle united through a spectacular Nikaah of their children.

The ancient city of Iwo, famously known as the city of the scholars was literally shutdown on Saturday, September 7 for the ‘Aqdu and Waleematu Nikaah between Umar Alani AbdusSalaam and his sweetheart, Zaynab Titilope Olurode with the hashtag #Zumar’19.

The nikaah, held at the open field of the Wings School saw in attendance, families of the bride and groom, royalties and dignitaries from the town and it’s environs.

Prof Lai Olurode, the bride’s uncle and a notable member of her family, who is the current Chairman of UNILAG Muslim Community, was boisterously welcoming guests and ensuring that their needs were met, all through the colourful ceremony.

Unlike secular weddings that encourage free mixing, male and female guests were seated separately under the gigantic and beautifully decorated tent with stunning decor of purple and silver colours.

At about 11:00a.m, the groom walked in majestically on the red carpet with his groomsmen. He was dressed in a turquoise Agbada with a cap to fit, complemented with a nice black shoe. His groomsmen were also dressed in white flowing attire with purple cap to fit.

The pretty Muslim bride followed suit closely with a large entourage of friends and well wishers. Zaynab opted for the same colour with her husband, as she walked slowly with her beautifully crafted silver handfan to her beautifully designed cushion chair.

Lecture: It is better to marry a Muslim slave than a rich polytheist – Shafii

The lecture of the day was delivered by Sheikh Dhikrullahi Shafii, the Grand mufti of Conference of Islamic Organisations (CIO). He started his lecture with thanks to almighty Allah and blessings to the Prophet Muhammad (SAW).

He reminisced about his early days in “Dawah” (calling to the path of Islam) being an indigene of Iwo town himself, with the Islamic scholars who are resident of the town present at the nikaah.

Sheikh Dhikrullah Shafii emphasised on the significance of marriage in Islam, stressing that being married is an act of worship and completing half of the faith.

Buttressing his points with an evidence from the Qur’an 2: 221, Sheikh Shafi’i said it is better for a Muslim man to marry a believing slave than to an unbeliever even if she is from a wealthy family. 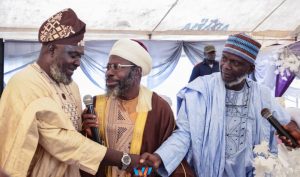 According to him, if you want a better and Godly society, it begins with the family. Family is the foundation of a good society. More so, getting married is an act of worship and half of faith.

“We want to build a Godly family that will not only worship Allah,  but transform the society positively, it begins with the kind of people we marry as wives. That is why it’s important we marry believers who will worship Allah with us,” he added.

He thereafter pronounced Umar and Zaynab husband and wife.

The official witnesses to the Nikaah were Alhaji Usman Abolarin and Ustadh Harun Ahmad.

By 1pm, the Nikaah ceremony was rounded off with words of advice for the couple and collective recitations of suratul fathia by the guests.

One of the highlights of the nikaah was a melodious ballad presentation from an Ewi exponent, Mr Adebayo Sefiu, who eulongised the two families and praised the couple.

The couple are alumni of the prestigious Vanguards Academy, Odonsengolu, Ijebu Ode, Ogun State. Umar, a member of Vanguards G41 2010 set holds a degree in Nursing from the College of Medicine, University of Lagos, with certificates in leadership and management, economic evaluation and clinical management of HIV in global health from the University of Washington.

He also holds a certificate in social entrepreneurship from Acumen and made the YNaija new establishment list for 2019.

He doubles as the first son and second offspring of a veteran media practitioner. Umar presently works as a Nurse at Federal Medical Centre, Bida, Niger State and a part time Data Analyst.

The bride, Zaynab belongs to the Vanguards Academy G56 2013 set. She studied Chemistry Education at the prestigious University of Ilorin and currently works as a Content Developer for various websites and blogs. 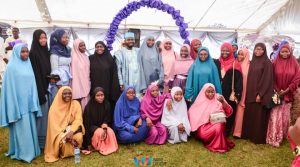 She is also a freelance web developer and a STEM (Science, Technology, Engineering and Mathematics) Education advocate. She is the first child of the Yunus Olurode family.

The groom, Umar, expressed his excitement about getting married by remarking that he sees marriage as “home, a place to be.” 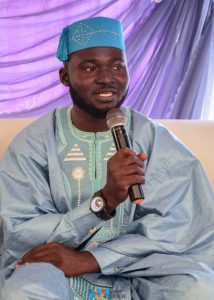 He said Zaynab’s forthrightness and ability to adapt despite her noble background attracted him to her.

He thanked all the guests that honoured their nikaah and showered encomiums on the Olurode family for giving out their beautiful daughter’s hand in marriage to his family.

“Let me also thank in particular, Prof Lai Olurode for his unwavering support before and during the nikaah. We see him working round the clock all through the wedding ceremony trying to ensure no stone was left unturned. Thank you Sir,” he added. 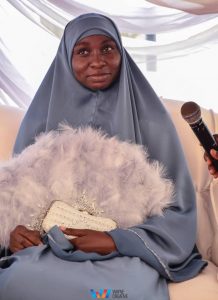 The bride on her part enthused about the nikaah that “I’m bereft of words. I don’t know how to describe how it feels.”

Speaking with Muslim News shortly after the ceremony, Zaynab said, “What attracted me to him is his determination and striving for perfection in whatever he does. Really, I can’t imagine going through this lifelong journey with anyone but him.” 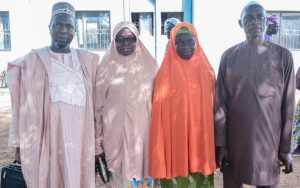 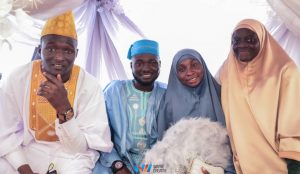 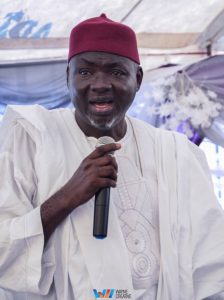 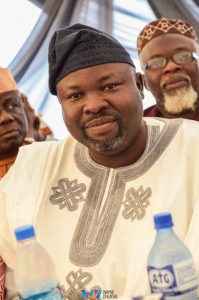 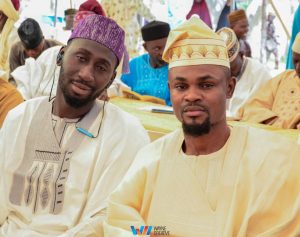 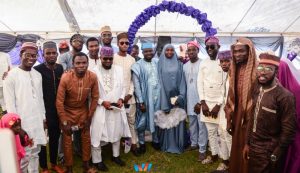 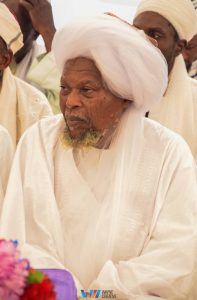