In their bid to combat the growing Islamophobia and setting the record straight about the universality and beauty of Islam, three Muslim majority countries have announced their intention to jointly float an English television channel.

The three countries are Malaysia, Turkey and the Islamic Republic of Pakistan.

The Prime Minister of Pakistan, Imran Khan, made the announcement yesterday, Wednesday, September 25 via his official Twitter handle, @ImranKhanPT

Khan, who hailed Turkey’s Erdogan for raising the Kashmir issue at UNGA, tweeted at exactly 8: 16 pm Nigerian time: “President Erdogan, PM Mahatir and myself had a meeting today in which we decided our 3 countries would jointly start an English language channel dedicated to confronting the challenges posed by Islamophobia and setting the record straight on our great religion – Islam.” 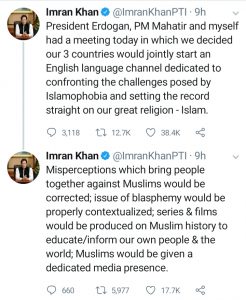 He stated that the misperceptions that bring people together against Muslims would be corrected, adding that the issue of blasphemy would be properly contextualized.

“Series & films would be produced on Muslim history to educate/inform our own people & the world; Muslims would be given a dedicated media presence,” he added.

The threads which have gathered thousands of likes, comments and retweets have received commendation from Muslim netizens.

“Finally the who is who from the Muslim ummah have come together with a brilliant idea to counter information against Islam. Hopefully, the channels will be beamed beyond these three countries. Well done!,” a Twitter user, Asma Ali Zain reacted.

The publisher of Muslim News Nigeria, Rasheed Abubakar also tweeted, “That’s it…exactly what I addressed at a lecture on the media and Islamophobia. Alhamdulillah some muslim leaders are now waking up from their slumber. I pray others join them when they’re awake. By Allah, I am very confident that it’ll succeed, & it will certainly mark the beginning of the genuine Islamic reawakening the west & their media fear the most.

“It’ll also mark the birth of another global voice pushing the counter narrative. I know a time like this would come 1 day, that’s why I have been researching on the subject. If this is extended to Nigeria, I would gladly be part of it. Thank you @RTErdogan & @chedetofficial.” 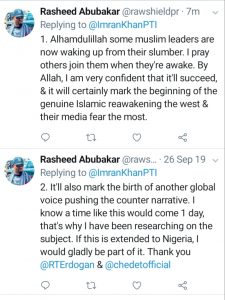 Shahjhan Malik wrote, “Very good step in the right direction. All Muslim nations should be a part of it to fight against #Islamophobia.”

Faouzia Shafiq said, “Thank you very much. That channel will help a lot, not only for the non-Muslims. We Muslims always get asked so many questions about our religion. It would help our young generation too because some of their questions are unbelievable. I’m glad when some Scholars answer them.”