The competition which was divided into two categories of Growth Track and Idea Track had the five-star winners carting away a princely sum of N1,000,000 (One Million naira ) each.

The Foundation also rewarded five runners-up in each category with a consolation prize of N200, 000 at the Award/Prize- giving ceremony and certificate presentations held at the Westwood Hotel, Ikoyi, Lagos, Southwest, Nigeria.

Muslim News findings revealed that the twenty lucky winners (first and runners-up) were carefully selected from a pool of 437 entrepreneurs who applied and submitted business ideas proposals and plans ranging from agro-allied, education, styling and fashion designing, catering, event management and solutions, automobile, food production among other sectors. 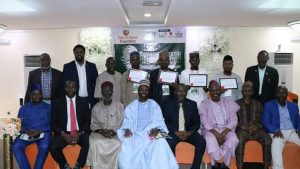 Make the best use of the funds – Jaiz Bank  MD

The Managing Director and Chief Executive Officer of Jaiz Bank Plc, Mr Hassan Usman, ably represented by Mal Mahe Abubakar- Mahmoud congratulated the winners and runners up, urging them to make the best use of the funds in order to improve their standards of living.

In his opening speech, Mr Usman said the BPC which started five years ago is aimed at stimulating creativity and innovation in the Nigerian youth by developing their entrepreneurship skills for productivity and self-reliance.

According to him, Jaiz Bank is proud to be associated with this initiative since inception. It is in tandem with the focus of our bank in developing human capital in the country.

“I commend the laudable achievements recorded by Zakat and Sadaqat Foundation. May Allah continue to make this initiative wax stronger year by year,” he added.

While giving the executive brief, the Foundation’s Executive Director and Chief Executive Officer, Prince Sulayman Olagunju noted that the rationale behind the establishment of the competition is to give Business Grants to worthy business ideas and already existing ones for growth and development.

In his speech, he said the BPC is an initiative under the Entrepreneurship development project through which the Foundation supports business ideas and existing businesses.

According to him, “BPC is an Entrepreneurship Development Project used to commemorate the United Nations International Youth Day which holds August 12 but we were unable to hold it during that period because it clashed with the Eid-ul-Adha celebration.

All winners will pay back to society – Lead Project Consultant

The Lead Consultant of the project, Mr Ayoola AbdulWasi’ disclosed that the beneficiaries are expected to pay back to the society through the payment of Zakat and empowering other Nigerian youths.

He said, “With regards to the seed or growth capital you have been given today by ZSF, you are going to pay back indirectly by creating massive wealth from your seed and growth capital, creating employment for fellow brothers and sisters as well as Nigerians.

“Paying Zakat and Sadaqat to ZSF and other charity bodies when you grow in a leap, being an active supporter of Corporate Social Responsibility initiatives such as this project (as a funder or sponsor) in your operating environment and strengthening the national economy through your products and services,” he added.

He further gave hints on how to payback graciously which include imbibing business mentorship, business planning, financial discipline, critical thinking, love for business, exploring further training, research and development, management of the 4Ms(Man, Materials, Money and Machines) amongst others.

When Muslim News spoke with some of the beneficiaries, who expressed their happiness and readiness to work hard in a bid to maximise the opportunity and be able to give back to society.

The proprietor of Mahdu Noir International School, Ustadh Ismail Olaide Aleem said his passion to nurture sound minds through dynamic activities capable of changing lives with a vision to fill the pristine ideological gap observed with many Muslims today led him to participate in the competition.

While thanking Allah for been among the Star prize winners (idea track category), Ustadh Aleem said with the N1 million he won, his Arabic school would start operation in earnest.

According to him, “Arabic is a major language of Islam and it is seen as education. That is why I developed an interest in teaching young Muslims the knowledge of the Qur’an but there are no facilities to embark fully on this project.

“I have got where to use but yet to get the necessary facilities. I want to establish a school with boarding to accommodate interested Muslims coming for Tahfidh (Qur’an Memorisation) programme for six months but I lack the necessary materials such as bed, furniture and others.

“I have gotten another foundation to build a structure. I needed fund to kick start. There is no joy in having a building where nothing is happening there. Alhamdulilah, I got the support from the foundation. I pray Allah make it easy for me to accomplish this mission ahead. I also pray that Allah continues to strengthen ZSF and its entire team members to sustain the good initiative,” he added.

“We are into rabbit farming which comprises breeding and processing of well-packaged rabbit meat”, AbdulKareem AbdulFatai, CEO, AYOFE MULTILINKS FARM said, in an interview with Muslim News.

“I am focused on putting my passion and skills to good use in growing the rabbit business, creating employment and contributing my own quota in the nearest future,” he stated.

At the event, which is the grand finale of the annual competition, a total of 12 million naira was doled out to the budding entrepreneurs.