Barely a week after the release of the 2020 edition of the most influential Muslims in the world, Nigeria’s most authoritative Islamic newspaper, Muslim News has written the publisher, Royal Islamic Strategic Studies Centre (RISSC), challenging the inclusion of the leader of Boko Haram, Abubakar Shekau and other ‘top Muslim extremists’ in the list.

The medium which has ganered supporters across different spectrums, in a press release signed by its Publisher, Rasheed Abubakar on Friday, October 4, queried the inclusion of top extremists in the annual publication, ranking the influence of most powerful Muslim leaders on their community.

Abubakar, who lauded the initiative which started in 2009, insisting that terrorists and extremists irrespective of their religion, race, ideology or whatever motivates them; and their evil acts should not be given prominence by the media in the first instance. 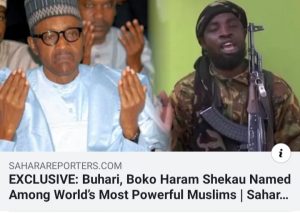 Muslim pundits faulted the SR for peering President Buhari and Shekau the terrorist in the same headline as ‘world’s most powerful Muslims’, while describing the report misleading with the intention to tarnish the image of Islam.

But in his reaction, Abubakar insisted that if the organiser didn’t include the ‘top extremists’ on the list, there is no way the Nigerian islamophobic media would have given Shekau undeserved fame by placing his name side by side with great personalities like President Buhari and the Sultan of Sokoto.

According to him, “Evidently, there is extremism in every religion. The Ku Klux Klan (KKK), the Lord’s Resistance Army (LRA) are some of the Christian terrorist groups yet, the media will never address them as Christian extremists. The monstrous white Supremacists have been terrorising the US and inspiring ‘wannabe-terrorists’ in other countries to attack Muslims yet, they are never called terrorists. So, why Muslim or Islamist terrorists? Why rating top Muslim terrorists in the first instance?” 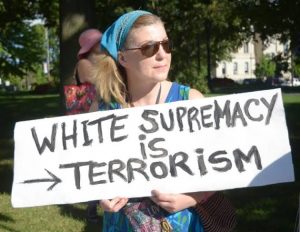 Though Muslim News  acknowledged the fact that the brains behind ‘The Muslim 500’ stated in the introduction that the impact of the nominees who made up the most influential Muslims in the world “can be either positive or negative, depending on one’s point of view of course”, it is of the view that those who have wrecked havoc on humanity do not deserve such mention.

“There shouldn’t have been ‘top extremists’ in the list of Most Influential 500 Muslims since terrorists actions and inactions are antithetical to Islam. A typical Nigerian muslim would tell you that Abubakar Shekau and his brainwashed members are not Muslims and their evil actions go against the prestige teaching of Islam,” it added.

Despite the fact that the RISSC also said in the introduction that the selection of people for this publication in no way means that they endorse their views; Abubakar disagreed with the inclusion of extremists in the list as such amounts to giving them the prominence they do not deserve.

“How would listing them help in the fight against extremists or  bring an end to their evils? It will rather lead to unnecessary controversies especially in the  non-Muslim dominated media in Nigeria,” Muslim News publisher suggests.

Alluding to the New Zealand Christchurch terrorist attacks where 50 Muslim worshippers were murdered in cold blood, while 50 others got injured in March 2019, the author of ‘Hijab and the Nigerian Press’ recalled that the Prime Minister, Jacinda Ardern and media outfits that covered the Christchurch mosque attacks talked more about the attack but didn’t give prominence to the terrorist – not even showing his face.

According to him, Visibility supports the spread of terror. It makes terrorists look more important and powerful than they are, and provides a platform for their messages. It also encourages copycats to embrace the same murderous ideals and seek similar exposure.

“Special mention of this nature will only make them more popular and make some local/indigenous terrorist groups to commit more heinous acts against mankind so that they can also make the list in  subsequent years. The Boko haram didn’t make the list of ‘top extremists’ when ‘The Muslim 500’ debuted in 2009.

The release further reads, “the ‘top extremists’ section of the award, formerly known as ‘The Radicals’ had notable names such as Ayman Al Zawahiri of Egypt, Abu Omar Al Baghdadi of Iraq, Sheikh Rabi’ Ibn Haadi ‘Umayr al Madkhali of Saudi Arabia and the late Osama bin Laden, also from Saudi Arabia, among others in (page 163/164) when it debuted in 2009 , before it was changed to ‘Top Extremists’ during the 2014/15 edition.

“The surprising entrance of the dreaded Nigeria’s Boko Haram into the list of top extremists in 2014/15 drew the attention of Nigerian media to Muslim 500 which has been previously underreported despite having prominent Nigerians such as Sultan of Sokoto, His Eminence, Alhaji Muhammadu Abubakar Saa’d III from inception in 2009 (page 52/53) and the Borno born Islamic scholar, Sheik Ibrahim Saleh,” Abubakar argued.

READ ALSO...  The Almajiri Series (1) Beyond the Stereotypes By Aliyu Dahiru Aliyu

According to the author, ‘Muslims and the Threats of the Media’, it took Boko Haram five years to make the list on page 169 alongside another newcomer, DAESH’s Abubakar Baghdadi.

“The leader of the extremist group didn’t get the special mention on a platter of Gold, the insurgent group killed indiscriminately Muslims and Christians, burnt down places of worship and abducted the 200 Chibok girls in Borno, Nigeria in 2014.

“By 2016, Muslim 500 made headlines in the Nigerian media with inclusion of His Excellency, President Muhammadu Buhari as a newcomer, barely a year after he was sworn in as the President of Nigeria. Since then, the Nigerian media has been featuring ‘President Buhari together with Shekau, and Sultan of Sokoto’ in their headlines.

Abubakar who also authored ‘Islam and Modern Vices called on the organiser to cancel the ‘top extremist’ section and stop promoting leaders with bad influence if it truly wants to end terrorism.

“While praying that Allah reward the people behind it. But if they want to end terrorism and extremism, it’s high time they and various organisations stopped giving so-called extremists publicity and attention which incidentally, is the lifeblood of their deleterious activities but which they don’t deserve. They should stop ranking leaders with bad influence if they truly want terrorism carried out in the name of Islam and stereotypes against Muslims to stop,” he added.

By Abdullah Abdulganiy and Miftaudeen Raji